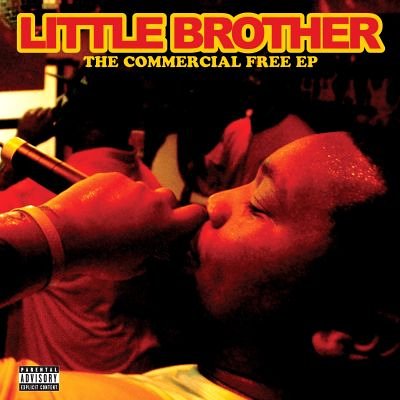 There’s something funny in the air here. It’s not Little Brother that smells bad because to put it bluntly their shit don’t stink. In fact not many artists ever in the history of RapReviews.com can claim two perfect 10 albums, but Little Brother has in a very short span achieved that goal with both the unheralded “The Listening” and their widely distributed major label debut “The Minstrel Show.” 9th Wonder consistantly creates beats that are uplifting, inspiring, funky and oh-so-fresh, while Phonte and Big Pooh inject lyrics that not only match them exquisitely but suggest a strong dedication to not only the craft of emceeing but to hip-hop music and culture as a whole. There’s not a damn thing sour about that. What’s odd though is how “The Commercial Free EP” seems to have gone totally under the radar. You’ll notice that this is not listed as part of their catalogue at AllMusic.com, their original imprint ABB Records or even on their official Atlantic Records discography. That’s weird. It’s even weirder when you delve into the Atlantic site and the last update is from March 9th of this year. You mean to tell me LB hasn’t done anything between March and now? Well WHAT THE FUCK is this EP then?

Well apparently it’s a live performance. The liner notes for this release are pretty spartan but if you read all the way to the end there’s a brief note that says “Recorded live at the Record Exchange, Raleigh, NC – October 9, 2005.” That much at least makes sense – all three are from North Carolina, came together as a group in Durham, and rocking live in Raleigh is something they’ve probably done a hundred times. This time they decided to take some recording equipment along and make a short live album, officially 9 tracks long before the “Bonus Outtakes & Bloopers” are factored in. When I say short I do mean SHORT. Things start out with a short and comical “Words From the Champ (Intro)” by Percy Miracles before breaking into their rendition of “Watch Me” from “The Minstrel Show.” I normally prefer 9th’s beats but Khrysis hooked them up nice on this one. This is followed by “The Olio” featuring L.E.G.A.C.Y., which to my knowledge was only on the Japanese release of “The Minstrel Show,” so to a lot of their fans this song may be brand new. It’s the kind of dopeness you’d expect from 9th and the boys though, so check out the flow:

“Ain’t nuttin friendly just to let you know
You against me is Old Yeller versus Cujo
Better fall back, bumpin Leg could be a war
And when rappers talk to the dead like a ouija board
Tell ’em they still alive, shitted on but still I ride
Black phased you, used mayhem to bait you
Damn right I hate you, you hated us first
Said that Pooh didn’t belong, they is one-dimensional
Sound whack on every song, 9th beats sound the same
You don’t fuck with ‘Te, didn’t like Foreign Exchange
I scream fuck you all”

If you needed even one excuse to pick up this EP as a Little Brother fan, there you go. If you need two, the other bonus track from the overseas release “Hold On (Tellin’ Me)” is also included. There’s much more to enjoy though. “Slow it Down” featuring Darien Brockington is a song that works incredibly well live, as does “Lovin’ It” featuring Joe Scudda. There’s also some irony to the “Commercial Free” title as the live performance could basically be interpreted as a sales pitch to buy “The Minstrel Show” given all the songs are from one version or another of that CD, including their “The Becoming/Sincerely Yours/Effabeat Medley” and the grand finale “Still Lives Through.” Phonte’s verse from that song sticks in your head, whether heard on the album OR live:

“Even though, most of our albums are poorly promoted
And all the magazines probably won’t even quote it
J League never running or folding
We got tight to steal y’all spotlight and y’all won’t even know it
[…]
So innovative you the next best things, since, whateva
I just laugh wit it, cause today’s fan is tomorrow’s rap critic
One day they giving you the thumbs up the next
They telling 9th to go on switch his drums up the best
Is what they expect, but why they won’t let the music
Just be what it is is anybody’s guess, so ah
If y’all feeling this y’all aint gotta analyze it”

True indeed. You don’t have to contemplate Little Brother too deeply when you hear them, because they’re obviously dope with little to no explanation required. Check out the bonus tracks for a few laughs, including the only REAL explanation this album’s release gets on “A Word From Our Sponsors” which indicates that this EP was planned to be put out for over a year and distributed solely to independent record stores. That’s right – if you want this one don’t hit the brick ‘n mortar, hit “Tommy’s Tapes ‘n T-Shirts” or whatever you’ve got around the way. “The Commercial Free EP” will be worth the effort – it’s short but it’s damn good. Kind of makes you wonder why Atlantic Records hasn’t publicized it.