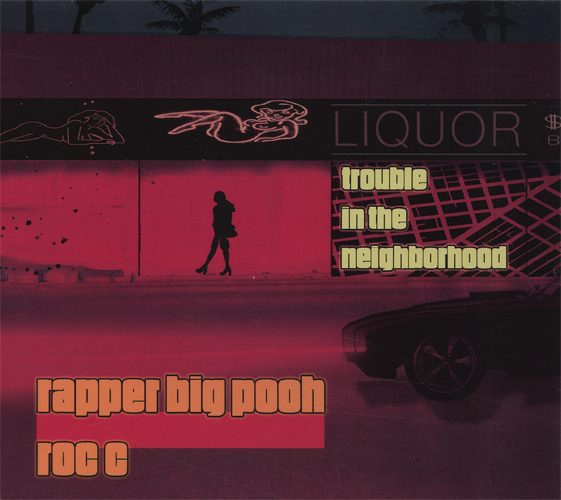 Little Brother will one day reunite, they have to. 9th Wonder has worked well with artists like Jean Grae, Buckshot and Murs, but none of their projects have quite touched classics such as “The Listening” or “The Minstrel Show”. They went their separate ways at precisely the right time, with their final record “Left Back” showing cracks following numerous solo projects and 9th Wonder’s endless stream of work. Roc C is known to provide gritty, wall-punching hip hop – anybody who has played EA’s Fight Night Round 3 will recognize “Don’t Stop”. Musically, “Trouble in the Neighborhood” is an unflinching collection of haymakers. “The Crew” feels like a sequel to “Don’t Stop” with its basic, infectious loop and aggressive rapping. Even Big Pooh sounds fresh as he ever has, as if the shirt and tie of old has been loosened from his traditionally level-headed approach of rhyming.

This may well be a Roc C album that just sees him share mic time with Big Pooh, but with Pooh’s passionate delivery, it manages to come off without sounding like a forced combination. Dae One, Praise and S1 combine to create a sense of danger throughout “Trouble in the Neighborhood” that is thankfully kept to a succinct eleven songs. It feels like an album that’s becoming less prevalent in hip hop, one that feels like WC & Daz’s “West Coast Gangsta Shit” from 2013. It’s music you’d often find ten years ago on the shelves of any music store, yet in 2014 there’s a disappointing gap in West Coast gangsta rap that has been there ever since Dr Dre starting fucking with headphones, and guys like Warren G and Mack 10 realized they had to keep their criminal activity on the down low.

Whatever your feelings towards gangsta rap, screw-faces should be applied to “Every Emcee”, a scathing tirade of testosterone-fueled posturing and a so-called fetish for the street. Nothing reaches the brutality of “Get That Mutha” though, a filthy collaboration with Alchemist and Big Twins. The Dae One beat isn’t far off of Jedi Mind Tricks’ “Age of Sacred Terror” in its plodding ominousness. Thankfully there are smoother, yet equally gangstafied compositions in “Want Sum Mo” and “Code 10”, both tracks showing 50 Cent how to do this style of rap in 2014. “Suicide Kings” actually feels like a 50 Cent song, thanks partly to Focus’ tiger creeping in the long grass’ instrumental.

I also question “Crazy Psycho”‘s inclusion, but at 11 tracks it’s slim pickings and a forgivable attempt at mad men rapping. “Trouble in the Neighborhood” is surprisingly well-produced, sees Roc C his usual self, crafting catchy yet street-focussed hip hop with an incredibly raw version of Rapper Big Pooh giving the songs an ounce of humanity. Only an ounce mind; this is that gully, “let’s install a subwoofer in the car” hip hop and a record that deserves to be heard more than it has.