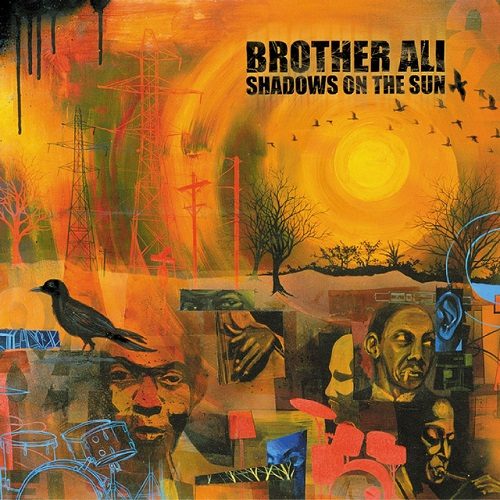 Shadows on the Sun

Brother Ali :: Shadows on the Sun

Allow me to adopt a slighly more personal perspective than this reviewing business normally calls for. When 2003 closed down, I had to decline when our editor-in-chief asked us to contribute to the annual Year In Review summary. Lean pockets prevented me from purchasing a lot of records I wanted to or should have become familiar with. Knowing any best of list of mine would therefore be heavily skewed, I didn’t vote in our year-end poll. Despite my lack of funds, I +was+ able to buy some records last year, and one that would have made my top ten either way was Brother Ali’s “Shadows on the Sun”.

Months later, it remains a personal highlight of this new millennium, and one of the few modern age rap albums I know the lyrics to. It has become a record I know my way through. And when I say ‘know my way through,’ I mean that in an almost literal sense. Often, when you listen to an album for the first time, it feels like entering a foreign city. Every detail demands your attention, its inhabitants speak a strange language that refers to places and people you’ve never heard of, and its architecture looks nothing like home. But spend enough time in that city, get accustomed to its flair, and eventually it may begin to feel like home. We all have our favorite records that we can consciously make our way through instead of getting swept along in traffic. Knowing your way around an album allows you to appreciate its qualities step by step. One day you may want to pay attention to the lyrics, then to the beats, then to a particular song, then to its overall atmosphere.

To stick with the metaphor, if you consider the rapper the tour guide showing you around while the producer is the aural architect, then Brother Ali and Atmosphere’s Ant have done a splendid job at furbishing their city “Shadows on the Sun” with great care for detail, equipping it life-like and full-scale. It’s ultimately that wealth and the maturity with which both these artists set to work that makes this album a rewarding place to visit. Granted, schoolyard brawls occasionally ensue, mostly when Ali is joined by touring companion and labelmate Slug. The thumping “Blah Blah Blah” sees them delivering loudmouthed battle raps to a swingin’ track and sing-along chorus, offering the newcomer the chance to prove he’s “a seasoned veteran at ego-wreckin’.” Even less lenient, “Missing Teeth” has Slug declaring: “We’re here to scrape off a layer of your make-up / so we can see what a bitch is really made of,” while Ant unpacks his trademark snares to make sure some teeth get knocked out. As for Ali, he has his very own method: “Ali’s a big teddybear / till they scream: ‘Stop slammin’ the car door, that’s my fuckin’ head in there!’ / Your teeth are everywhere / I serve your family and write about it in my journal like I’m Mr. Belvedere.”

As important as it may be for any rapper to prove himself in the ring, only the total package will make someone a role model. Imagine Cassius Clay not becoming Muhammad Ali, not standing up for black power, not refusing to go to Vietnam, imagine him without his larger-than-life ego and razor-sharp eloquence. While Brother Ali has a long way to go to achieve similar legendary status, he possesses the same kind of mettle as his namesake. His technique is flawless, his voice carries a wide range of emotions and subtext, and there’s a certain depth to what he says. For instance, in “Pay Them Back” he tries to convince the ever-critical hip-hop crowd to show some respect to the art and its artists:

“Beneath the outer layer the train is black
You just don’t disrespect the people that lay the tracks
You love this human expression, and they gave you that
And so the least y’all can do is try and pay ’em back”

Brother Ali is demanding. Any rapper that takes the time to recite Muslim scriptures is. But even when he seems overly occupied with himself or his devotion to Allah, Ali manages to turn his songs into lessons for everyone, walking freely across the lines between involvement and observation, between humble and self-agrandizing. “Forest Whitiker” finds a man truly at peace with himself, no matter the odds:

“Dependin’ on the day and dependin’ on what I ate
I’m anywhere from 20 to 35 pounds overweight
I’ve got red eyes and one of ’em’s lazy
and they both squint when the sun shines, so I look crazy
I’m albino, man, I know I’m pink and pale
and I’m hairy as hell, everywhere but fingernails
I shave a cranium that ain’t quite shaped right
Face type shiny, I stay up and write late nights
My wardrobe is jeans and faded shirts
a mixture of what I like and what I wear to work
I’m not neat and got a neck full of razor bumps
I’m not the classic profile of what the ladies want
You might think I’m depressed as can be
but when I look in the mirror I see sexy-ass me
And if that’s somethin you can’t respect then that’s peace
My life’s better without you actually
To everyone out there who’s a little different
I say damn a magazine, these is God’s fingerprints
You can call me ugly but can’t take nothin’ from me
I am what I am, doctor, you ain’t gotta love me”

This touches on what is probably the most essential trait of this album. It’s a thoroughly optimistic record. It comes from the soul, and that is what makes it whole. “Shadows on the Sun” is feelgood music, without any of the corny connotations that come with the term. Brother Ali may come from the perspective of the relentlessly touring underground rapper, but the finesse and liveliness of his debut puts many a mainstream album to shame. To quote the man himself: “It’s embarrassing / I mean, I’m the albino, but y’all pale in comparison.” For proof, check the aptly titled “Star Quality”, where Ali flows over a top-notch track with a bragging swagger, all the while maintaining a humble and human profile.

He can be philosophical about a painful altercation in his school days (“Win Some Lose Some”), but he can also be highly emotional about past hardships (“Picket Fence”). In “Room with a View”, he assumes the position of a “modern urban Norman Rockwell”, depicting his side of Minneapolis with stark social commentary. The humorous “Prince Charming” is also a superb study of how admiration can turn into obsession, “Dorian” shows the downside of showing moral courage, and “Back Stage Pacin'” is one of the most entertaining rap songs to ever draw from the touring experience. For some hard rhyming and Ali’s ability to channel all his energy into his delivery, check “Bitchslap!” and “When the Beat Comes In” with their hard-hitting pre-boom bap vibe.

The ultimate tool to whip some sense back into hip-hop he is not. But he’s the rare case of a rapper that can preach to a congregation without coming off preachy. Brother Ali offers a marriage of style and substance seldom seen these days. It’s not just the refined songwriting, it’s the masterful way these songs are musically composed and the way they combine to a panoramic view of the world as seen by Brother Ali. Musically, Ant doesn’t go particularly easy on his snares, but he counters them with many great samples and arrangements, resulting in one of the finest production jobs of 2003. To conclude and to come back to my initial personalized stance – when it comes to hip-hop, I’m easily impressed, but very few get to leave a lasting impression. Brother Ali is one of them. In hip-hop, there are many good rappers and producers, but they seldomly bring forth thoroughly good albums. “Shadows on the Sun” is one of them.