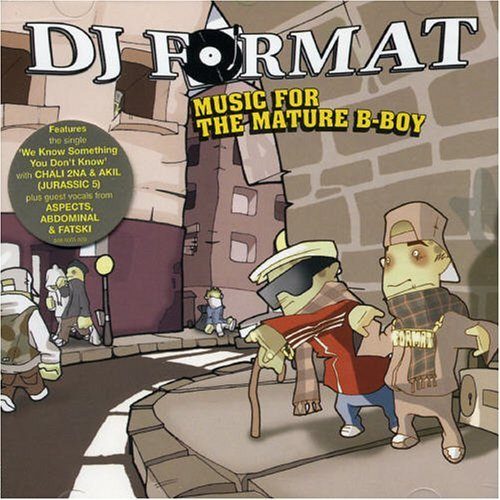 Best known to the international audience for his contribution to “Return of the DJ Vol. 2” and for “English Lesson”, his British take on the Double Dee & Steinski-inspired “Lessons” series, in 2003 DJ Format followed up these solid first impressions with his debut “Music for the Mature B-Boy”, the finely tuned result of a lot of crate digging, record spinning and knob twisting. While most full-lengths fronted by DJ’s today are either mixtapes with a bigger budget or lengthy excercises in turntablism, Format brings crates upon crates of neck-snapping breaks and funky loops to the neighborhood block party, making stops in Los Angeles, Toronto and Bristol, just to be back home in time for the “Last Bongo in Brighton”. “Music for the Mature B-Boy” isn’t afraid to be retro, but still manages to come off fresh, because back in those days it refers to ‘fresh’ used to be a keyword to describe dope hip-hop.

While the waves of nostalgia that have swept this culture since the early ’90s hint at a lack of creativity or were often nothing more than a marketing plot, Format caters to people who have preserved that vitality of hip-hop within themselves, no matter the age. People who may not even care about carrying on tradition but just like that extra boom in their bap, that extra chunk of funk atop a bountiful plate of beats. Not one to verbalize his affection for hip-hop in wordy declarations of love, Format does what any DJ worth his fee does and lets the music do the talking. Just in case, he’s brought some MC’s along, but despite the vocal tracks being in a clear majority, Format remains the star of the show. On “Last Bongo in Brighton (Remix)”, he weaves an ever-changing web of powerful cadences, with added touches of organs and horn stabs and a sweeping bassline, prompting any b-boy worth his pair of Pumas to go wax the linoleum.

The previously released “English Lesson” gets remixed as well, the result being more a smoothly seguing instrumental track than an actual cut-n-paste collage. But DJ Format seems little concerned with categorizations, and so while he definitely proves himself in the field of producing, he tackles the task from a DJ’s standpoint, always keeping an ear to the dancefloor. Save for the slow shuffle of “Little Bit of Soul”, the listener witnesses an acceleration from the common mid- to the uptempo. Furthermore, contrary to contemporary sounds, the record emits an analog warmth that quickly gets under your skin. Format’s sound library seems to hold only vintage bits and pieces, from the Booker T & The MG’s-like tight grooves on “Here Comes the Fuzz” to the mid-’80s dressing of “B-Boy Code Pt. 2”.

Vinyl buyers get an additional vocal track, but the CD should be able to tease your lyrical taste buds as well. Dating back to 2002, “Ill Culinary Behaviour” featuring Abdominal hasn’t lost any of its appeal. The Toronto MC, a natural if there ever was one, literally acts as host, welcoming his guests, hanging up their coats and seating them, while Format’s “in the kitchen / slavin’ over platters, you know, cooking rhythms.” Rhythms, whose nutritional value is best summed up when Abdominal teaches his offspring some table manners:

“Abdominal Junior, you will get nothing, young man
until you finish those breaks on your plate
cause all across the land there be starvin MC’s
who’d be happy to rock to beats like these”

Rarely do concept songs roll as easily off a rapper’s tongue. Format’s and Abdominal’s other collaborations, “The Hit Song” and “Vicious Battle Raps”, both filled to the brim with wordplay, convince as well, but “Ill Culinary Behaviour” is what “Vapors” was for Biz Markie, what “Packet Man” was for Digital Underground, what “I Need a Radio” was for LL Cool J. While Abdominal is “Music for the Mature B-Boy”‘s biggest and most pleasant surprise, the big name cameo feels more like going through the motions. But fans of Jurassic 5 are certainly going to appreciate these very motions when they hear Chali 2na and Akil flowing over the thick, percussive groove of “We Know Something You Don’t Know”, a track that would have been at home on any J5 release. If you’re looking for something more adventurous, Bristol crew Aspects invite you to their “Charity Shop Sound Clash”, a quirky pass-the-mic affair set to a tumbling piano/beat combo.

A certain format he may follow, but the diversity and skill that DJ Format displays on his debut put him in a league few DJ’s turned producer are playing in. In a time when hip-hop lacks some of that freshness that once distinguished it from the rest, “Music for the Mature B-Boy” is a revitalizing energy drink made up of funky beats, clever raps, tongue-in-cheek humor and straight up b-boy brawn. Cheers!