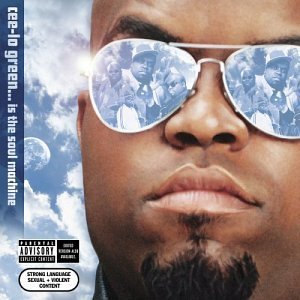 Freaky. Spiritual. Powerful. Groovy. Crazy. Trippy. Entertaining. FUNKY.These superlatives can be as easily applied to George Clinton as to Cee-Lo Green, the self-professed “Soul Machine.” In fact, if this reviewer may be so bold, Cee-Lo is and always HAS BEEN everything Andre 3000 only wishes heWAS as a singer. As rappers they are pretty equivalent but when Cee-Lo croons, you feel the hip-hop soul in it, not a reenactment of a 1960’s hair band that outside of Danger Mouse’s “The Grey Album” no hip-hop fan could give two shits about.

“If I could write one song to right all wrongs
I would, if I could..
But in re-tro-spect, a lit-tle bad
is good, mm-hmmm..
We all need what we want and don’t own
what we need, mm-mmmm..
Life is bit-ter-sweet
A bit-ter-sweet, indeed” – Living Again

Cee-Lo made his reputation over the past decade for his work with the Goodie Mob and for any guest appearance he makes on a song making it twice as good. Now he’s back to stir the pot yet again, and you know it wouldn’t be Cee-Lo if he didn’t bring along some friends. Most notably he brought Timothy, better known as Timbaland, to make his first single “I’ll Be Around” some funkdafied shit. You have to be a little bit cocky and arrogant to be an entertainer, to know that you have something unique people want to here. Cee-Lo is not a LITTLE BIT cocky, he’s a whole hell of a LOT BIT cocky:

“How could I possibly, be inconspicuous
When my – flow is fuckin ridiculous?
That’s quite an accent, you see I’m from the South
But some of the most beautiful things come out my mouth And I’m on stage just as soon as I come out the house
So I might as well give them somethin to talk about
I bust a rap to make a blind man believe in the Boogey
And if you came here to move this evening then boogey on!”

Encompassing a whole diversity of Southern styles, Cee-Lo smoothly transitions from a thoughtful crooner, to a braggadocious rapper, to a concious philosopher, to a crunked out thug. He’s letting his nuts hang on “The One” featuring Jazze Pha and T.I., having a good laugh with Ludacris on “Childz Play,” sounding like the genetic mixture of Shaft and Gil Scott-Heron on “I Am Selling Soul” and making the ladies wet with “All Day Love Affair.” Quite frankly it’s almost ridiculous how chameleonic Cee-Lo is in styles. You can create any definition of music you like, and Cee-Lo seems to fit into it.

Of course, an artist this versatile needs music that’s capable of keeping up with his diverse range of styles. That said, the list of producers Cee-Lo has lined up for “Soul Machine” is as impressive as the beats they bring. DJ Premier does the dark and moody “Evening News,” a song completely devoid of his typical jazz lifts and scratched hooks, but no less richly produced or attention grabbing. Organized Noise is a necessary part of any Dungeon Family-related album, and you can find them on the aforementioned “Childz Play” and the thought-provoking “Scrap Metal” featuring Big Rube and G-Rock. The Neptunes match their quirky funk to Cee-Lo’s well on “The Art of Noise” and “Let’s Stay Together.” Even little known names like Locksmif and Traxx do nice on “Sometimes” and the title track “Soul Machine” respectively.

It’s hard to find a flaw in Cee-Lo’s album, but it may not necessarily be clear why to the reader just what it is that makes him so magical on the microphone. One has to wonder though if being shorter in stature than most of today’s popular artists just made him that much closer to the funk. While other artists sound contrived and phony when they’re trying to be spiritual, Cee-Lo has a style that’s both plain-spoken and profound, and like Saul Williams sounds good on paper but even better when delivered. Take this excerpt from “Sometimes”:

“For instance, I don’t let the TV screen
come in between my daily routine, at a spot where me and my boy went
Someone interrupted our enjoyment
Hmm, what do you know – an out of work MC looking for employment
Bt I’m still courteous with my greeting..
Brother, I’m eating!
And his style sounded similar to someone else’s
So, evidently he’s been cheating
But I couldn’t question the, des-ti-ny, in which we meet
So, you guessed it, I suggested that he just have a seat
And then I explained to him that I remained in the meantime
Mastering mysterious methods of writing
Finding my peace of mind with soft music and mood lighting
Then supernaturally I foresee
The beginning stages, and then eventually pages get filled
Completely
You see I dive into the depths of my soul
Seeking, to explore the hidden trea-sure, of a pure literature
While these others are unsure
Being that the deepness makes them doubtful
Deliberately delaying, saying
They’ll settle for whatever washes toward the shore
Hmm, delerious from delusion
My dealings with them are indirect so the conclusion is seclusion
Because, mixed beliefs create confusion”

There’s no confusion about Cee-Lo being a great entertainer, as much singer as rapper, as much spoken word poet as freaker of the flow, someone to whom no one style can be pinned but any one style he seems to fit in. It’s odd then that fellow Organized Noise member and OutKast Grammy award winner Andre 3000 doesn’t seem to get it. If they gave the award for natural soul, Cee-Lo would be holding the trophy. Instead Andre 3000 forces a voice not inclined towards crooning and unlike Cee-Lo sounds completely phony, when he should stick to the gift of rapping he first brought to hip-hop and made OutKast albums famous for. Some artists are gifted enough to be the “Soul Machine” and never recognized for it, and some are given awards even though they are pretenders to the throne. We’ll leave you to figure out which is which.