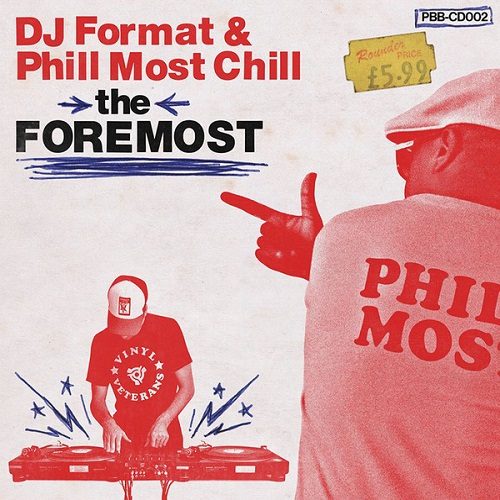 Remember random rap? Random rap was a phenomenon that emerged in the last decade, partially originating in a discontent with contemporary rap and spreading across the blogosphere as collectors unearthed obscure and overlooked tunes from their vinyl vaults and made them available in digital form. ‘Random rap’ then was simply a neutral tag to specify rap that didn’t fall into any of the established categories. The growing hype inspired twelve-inch reissues and incited bidding wars for original pressings, finally turning ‘random rap’ into a selling slogan by the late ’00s. Although the relevant bloggers and mixers always saw the term as a broad umbrella, random rap ultimately came to mean late ’80s/early ’90s, sample-based East Coast hip-hop from acts that never cut more than a handful of dope records. It was basically the internet catching on to an idea the editors of ego trip magazine had back in 2000 when they put out the compilation “The Big Playback”.

Phill Most Chill could have easily had a song on “The Big Playback,” for instance “On Tempo Jack,” the title track of his 1988 single. For other valid candidates, look no further than his new album. How come? Does “The Foremost” gather unreleased material from that era, similarly to Dooley-O’s “Watch My Moves 1990” ten years ago? Nope. “The Foremost” is all new, named after its two collaborators, Phill Most Chill and DJ Format. Phill hasn’t just stepped out of the time capsule, he’s actually done this kind of thing before, while Format too makes no secret of the fact that he’s inspired by the later ’80s.

Together they travel back to the days of high-top fades and gold rope chains, of James Brown loops and breakneck-speed raps. Speaking of, ‘fast rap’ was another new tag for old music, and it applies here a number of times as well. The duo even creates a fast rap theme song of sorts with “Get Busy Music.” They set the pace right from the beginning with “The Feeling,” Phill declaring, “Enough with these gimmicks / My rap has no respect for speed limits.” He whirlwinds through the track like Big Daddy Kane at his fastest. In regards to the music, however, it would be inaccurate to simply label “The Feeling” a throwback track. The dense drum programming – although obviously hearkening back to yesteryear – is trademark Format, and the cut possesses an aura of soul and blues hip-hop back in the ’80s hadn’t appropriated yet, at least not to that degree.

While “The Feeling” has a hardcore edge to it, “The Foremost” is keen to explore other manifestations of the era it revisits. On “Diggin’ For a Livin'” Phill most certainly also speaks for Format as he recalls his record mining adventures:

“Here I go again, on the road again
Fillin’ up the gas tank, hit the bank, so I got enough dough to spend
Found a super spot I wouldn’t even show a friend
Helmet with the light on, yeah, I’m goin’ in
This is not what you call light-weight diggin’
‘Heavyweight’, ‘Gotta Be Funky’ – Monk Higgins
Once I plunder the Soul, slide to the Rock ‘n Roll
On that Secret Squirrel/Morroco Mole
Been searchin’ for this ill record that I still ain’t found
You know the title? Don’t tell it… (Huh!) James Brown
made the most dope records you could catch – but
9 times out of 10 they probably scratched up”

“Take a Stand” is a political pro-black manifesto that samples Lakim Shabazz, whose name recently got caught up in an Eminem rhyme torrent in “Rap God.” “The Shape of Things to Come” is characteristic for when rap began first to explicitly express artistic ambition. “Beverly” is an adorable song dedicated to a special girl. When he rhymes, “Real hip-hop is when a girl’s so nice / that you make a song about her and say her name twice,” Phill underlines his positive approach towards the artform, although it should be noted that, starting with UTFO’s “Roxanne, Roxanne,” rap songs that didn’t only have nice things to say about girls proved far more significant. “Angry Birds” is the Philly rapper’s answer to negative mindstates, but with its droning beat and buried vocals it lacks the spirited vibe of the rest of the album, even with lyrics that stick faithfully to the ornithologic metaphor. “Work Song” has a similar problem, trying almost too hard to reflect dull repetition, but is saved by acute observations about the daily grind.

One of the points “The Foremost” tries to make is that even with music from a bygone era you can still make statements that are relevant for today. There will always be Beverlys and they don’t nearly get the attention from rap that they deserve. Phill also takes President Obama to the task on “Take a Stand” and doesn’t forget to mention how online market places changed record digging. And he drops contemporary references. Any such intentions however are overshadowed by the often uncanny resemblance to rap tracks from ’87 and ’88. This isn’t rap’s first attempt to recreate those specific years, but it’s one of the closest, even considering some tracks that are too much make-believe like “Triple Threat MC’s.”

After the first wave of credible rap nostalgia of the earlier ’90s (Wu-Tang, De La, Liks, J5) hip-hop was inundated with stale recollections of better times. DJ Format and Phill Most Chill cut the crap about how it used to be and go straight to the source. Opinions will surely vary on their approach, but they definitely deserve credit for how well they pull it off. On his blog www.thatrealschitt.com, Phill Most Chill, in typical tongue-in-cheek manner, refers to himself as a ‘random rap icon.’ Rap history knows plenty of success stories, but some of its most compelling chapters are written by talented writers who never were fortunate enough to be bestselling authors. Phill Most Chill seems quite happy with how it all turned out for him, as he reveals in the title track:

“P-h-ill Most C-h
-ill from the PA
Rep the 215 like Beans, Thought and Freeway
But way back in the ’80s I was shootin’ the gift
like EST, Steady B, Lady B and Will Smith
If stars align your time’ll come to shine
If they don’t they just don’t, whatever, pay it no never mind
Better rhymes could be the answer
or maybe you just need better beats people can dance to
There’s a chance you can be a star if you sell out
A female rapper rappin’ with her bitties all out
Maybe then the fickle audience’ll warm to you
But how many of us really know the formula?
Life is a game of chess, the more success, the more stress
So remember, sometimes more is less
My kids are A students and they doin’ they best
The inspiration for every word I manifest”