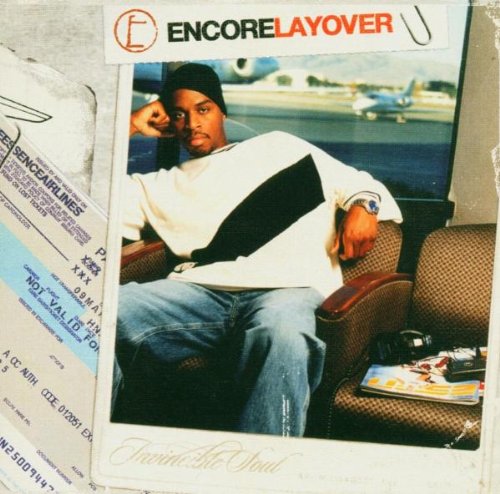 While it’s generally the East Coast most look to for underground hip hop, the West Coast also has its fair of accomplished artists. A loose collective of artists, including Del tha Funkee Homosapien, Dilated Peoples, Rasco, and The Pharcyde, among others, has proven over the years the West Coast can contend with the best of the East.

But, as is true in any genre, music will speak for itself, regardless of the constraint of labels. Fitting, then, that Encore is currently spotlighted as an up-and-comer at okayplayer.com, the homepage for acts such as The Roots, and Common, who have managed to juggle label pressures while maintaining underground credibility. The trick is challenging, but certainly not impossible, as many artists who are held in the highest esteem in underground circles are actually signed to major labels (Gangstarr, for example).

In his own words, Encore is resentful of the rift between the mainstream and underground scenes: “Layover is the concept of me waiting for my flight out of this bullshit we call underground. The underground was for independently talented cats. Now it’s got a bad name because it’s associated with not making complete songs, and making shit that is going out of it’s way to sound unpolished.”

As the quote indicates, Encore is a confident, skilled, well-polished MC, and the beats for Layover implement all the best features of various sounds. The work behind the boards is handled exclusively by underground mainstays Jake One and Vitamin D, as well as long-time Encore collaborator Architect, all of whom offer their unique flavors while managing to parlay them into a cohesive whole.

While there is plenty of the hard-hitting bangers that one might expect from an album entirely produced by the aforementioned beatsmithsâ€”thick, funk-influenced basslines, with the interspersed subtle trumpet or muted guitar strokesâ€”there is also a notable measure of smoothed-out, neo-soul. The better tracks work nicely to compliment Encore’s smooth, baritone vocals like the thumping “Layover Overture,” explosive horns of “City Livin’,” soaring strings and piano glissandos of “Essentially Yours.” Topically, there are definite nods to the “average-guy” toneâ€”a trend that seems to be en vogue again, largely in part to Kanye West’s rise to prominenceâ€”that runs throughout most of Layover, like the sweet family anecdotes of “My Way Home,” though it scarcely comes off as contrived.

Elsewhere, clean guitar chords and Nathan Thomas’ sultry R&B chorus add an emotional touch to the love song, “The Schism,” where Encore shows off his articulate flow and lyricism:

“Despite karma, first thing I noticed she liked drama
Testing my honor, trying to check for chinks in my armor
Said she didn’t need Sir Lancealot
Far from star struck, just liked to dance a lot
And wondered why my songs didn’t draw much (awww shit!)
You know my reaction, baby girl fronted on my one life passion
Huh, asking why my raps haven’t cashed in
Huh, acting like she want her grill smashed in
Now mind you, this is at a time
When I was trying to find truth, no time to refine Boo
She trying to live ghetto fab, pushin’ the pedal fast
Little did she know, that’s my past – I’m try to let go of that
See if you rolled it back a year or two
I had a little more play in me, little less spiritual
I would have had baby stressed, something terrible
Miracle or not, she just don’t know what she got”

There’s no glaring flaws to be found on Layoverâ€”in fact, few flaws altogether. For some, Encore’s raps might not be the most engaging or attention-grabbing, but even that, to his credit, is a result of his abstaining from gimmicky tactics. Though the guest spots for Opio, A-Plus, Arcee and Pep Love don’t hinder their respective tracks, they don’t add nearly as much as crooner Nathan Thomas on “The Schism,” and “Faithful,” or Ladybug Mecca on “Real Talk.” And, without yearning too much for mainstream submission, it probably wouldn’t have hurt to add something a bit catchier to a few of the hooks, like the otherwise-stellar first single, “Zigga Zigga.”

Perhaps the most impressive accomplishment Encore achieves is that the metaphor of the Layover title translates in the music. Obviously annoyed by titles and labels, Encore set out to make a good albumâ€”not a mainstream album or an underground albumâ€”but a good album. Well, he succeeds here, as Layover contends as an early candidate for album of the yearâ€”indie or otherwise.