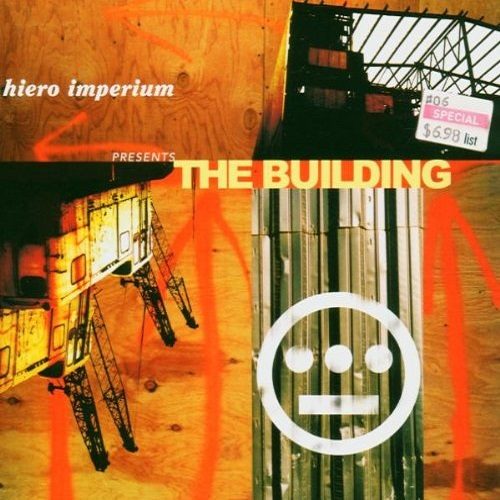 With the release of the bleakly monotonous “Full Circle,” it has become painfully evident to even the most rabid Hieroglyphics groupie that the crew has certainly seen better days. Unquestionably the most influential West Coast collective of the ’90s, Hiero’s once inexhaustible well of quirky verbal gymnastics and system-rattling, goosebump-inducing production appears to be approaching empty, their impeccable track record marred by inconsistent outings by both group members and Hiero Imperium affiliates. While there is much to dissuade one from purchasing “The Building,” a budget-priced sampler from the label, the tracklist is a hopeful prospect- solo shots from Casual, Opio, Pep, Tajai and Del are all listed, while a 9th Wonder remix of staple “Make Your Move” heads the 12 track platter. I’ll be the first to admit that I lost much of my enthusiasm for new Hiero material after Casual’s last gormless solo effort, but the price point and tracklist beckoned me to reach in my lint-filled pockets and purchase this record, and to be perfectly fair, I can’t say I regret that decision at all.

To be honest with you, I slept on the past few Hiero releases. I gave “Full Circle” two listens and chucked it in the nearest used CD bin with the swiftness. I copped Z-Man’s “Dope or Dog Food” LP on the strength of a friend’s hearty recommendation, but never really found the time to give it a thorough listen, though my initial impressions of its humorous but hard-hitting content were largely positive. I can’t say I’ve even heard the new Tajai, though it’s garnered praise across the internet. For anyone who’s hit the snooze button on Hiero in recent times (and who can blame you, really?), this serves up a triple shot of espresso, a heady brew of tongue-twisting, superhuman emceeing married with irresistible, slinky production, all infused with a soulful ingenuity that could only be Hiero.

Though it has met with widespread disapproval amongst the Hiero faithful, I find it hard to fault 9th Wonder for his work on the “Make Your Move” remix. While I have developed an intense distaste for 9th Wonder’s work of late (how boring can dude get? I swear this cat’s beats cannot be distinguished from one another), he manages to achieve the stunning feat of creating a beat that simultaneously recalls vintage Hiero while remaining distinctively 9th Wonder. The organic, scratchy feel of the drums is clearly 9th’s signature, but to an untrained ear this track could easily pass as one culled from the “93 Til” sessions. Elsewhere on the disc, other highlights include the crunkish slump of Casual’s “Oaktown,” the standout single from Encore’s “Layover” LP, “Real Talk” (an ingenious, breezy number featuring an inspired performance by a certain Ladybug Mecca… remember?), the Goapele-blessed, poignant Pep Love solo “Family Friends,” a number as involving and vital as anything on “Ascension”.

Stunningly, the compilation’s most underwhelming cuts arrive courtesy of my two favourite emcees in the crew- Del’s arty, Detroit house-infected track provides a bizarre backdrop for his eccentrically verbose and tired-sounding diatribe on “Funk ‘Em,” his refrain of “Motherfunk ’em, just to see the look on they face/ Funk ’em!” failing to gather enough momentum to gain the anthemic quality intended. A-Plus’ stab at a hardcore battle number on “Leave Me Alone” is hopelessly drab affair littered with redundant braggadocio and a disgraceful hook- “I don’t give a flying fuck right now/ Check it out, I don’t give a rat’s ass at all…” suggesting that it really might be prudent to take his sage advice and leave this track alone altogether.

Ultimately, as much as I hate to admit to my lapse in judgement, it appears that my scepticism towards anything Hiero has been erased by this collection. Hiero hasn’t sounded this potent, this alive in longer than I can remember, and I for one am certainly pleased to welcome an old friend back into my disc changer. Having been eclipsed by the rising prominence of peers like the Visionaries, the Freestyle Fellowship and especially the Living Legends, it appeared as though Hiero were set to be archived amongst faded champions like The D.O.C. and King Tee. Next time you hear “Hiero is sooooo 1997” around your way, make sure you have a copy of “The Building” handy. Rediscover Hiero!