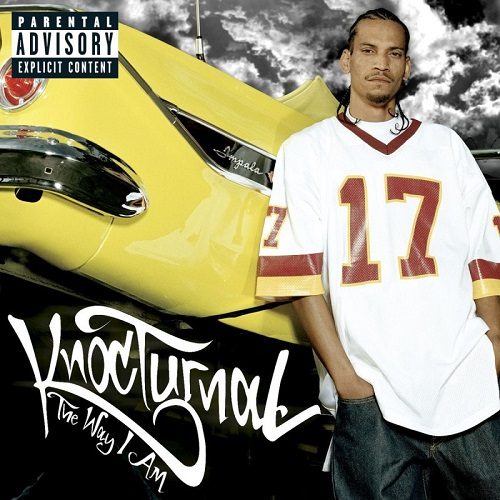 Hard to believe, but we’ve actually been hearing Knoc-Turn’al on the mic since 1999. That’s when Dr. Dre first introduced us to his new protege on his sequel to “The Chronic,” simply entitled “2001” and emblazoned with a big leaf of you-know-what on the cover. Eminem, Snoop Dogg and newcomer Hittman may have gotten all the publicity, but Knoc was quietly making a name for himself with appearances on “Bang Bang” and “Some L.A. Niggaz.” Then in 2001, his profile was raised further with the single and video for Dr. Dre’s hit single “Bad Intentions” from “The Wash” soundtrack. It was a marriage made in heaven – Dre’s booming beat, symphonic flute sample, and Knoc on the memorable hook bragging “I don’t give a fuck ’cause I’m just/drinkin, smokin, straight West-coastin/ Bitches puttin ass in motion/Pussy poppin, sex promotin.” That’s PIMP-TASTIC! Heads were no doubt psyched when Knoc dropped his “L.A. Confidential” EP in 2002, which featured bangers like “Muzik” and “The Knoc” featuring Dr. Dre and Missy Elliott.

Where’s he been since then? Quietly working on this full length album, simply entitled “The Way I Am.” And it’s good to see some things never change. On the title track, Knoc is still showing love to his mentor and the man who brought him in the game with the words “I’ve been ridin for five years, with D-R-E/you minor, I’m major league.” And not surprisingly, even LONGER riding Dre partner Snoop Dogg has a guest appearance on the song, with his laconic Long Beach stylings. The only things that might throw you about this track are the fact that Dre didn’tproduce it – Scott Storch did – and the fact that Knoc’s flow has been polished to a high test shine. In fact Knoc does not sound upstaged by Snoop at all – his flow sounds like a dusted mixture of Suga Free and Warren G, rolled up with a hint of B-Real’s nasal qualities into one funky motherfucker who’s lettin’ it ALL hang out:

“Who do you knowww that RIDES for da coast
with a new breed and style of rap like me?
I had the patience to study the game
Dr. Dre made two Chronics, and this is Chronic Three!
I make class-ic hits, ‘n buy class-ic cars
An’ see class-ic hoes at class-ic bars
(Now I just step in the spot and the girls all pause)
Magic stick! I break down walls
.. Got my heaters when shit jumps off
Really, you steppin to me is a lost cause
Party animal, here since a quarter to ten
Babyface, six-two with an L.A. brim
I got SHAYLtoes on, I don’t wear them Timbs
I got hoes, got weed, and a gallon of gin
Ain’t no tellin what I might get innn
The first night, do it right, I’ma do it again”

It’s not a coincidence or a typing error that extra consonants and pauses are added to the Knoc-Turn’al transcription – it’s just how he flows. His measured way of speaking draws out words beyond their normal pronunciations into a world of language all his own. It’s impossible not to be drawn to listening to Knoc when he speaks, precisely because of HOW he speaks. Combine this with a penchant to say even the simplest phrases with a flair that makes them either witty or funny, and Knoc shines. He makes hip-hop quotables straight up comedy: “That’s right, I like.. bi-sexual women, fuck dykes/Suck dick? No, but your father might – fuckin hermaphrodite!” But that’s the old shit, this is all new shit. Peep the Precision produced “Peepin’ Tom” for some new material:

“Once upon a time, in the projects YO
There lived a nigga named Knoc-Turn’AL
America’s Most Wanted, fo’ sho’
In a black lo-lo with tinted win-dows – I’m just
{*imitating Eazy-E*} Cruisin down the street in my six-fo’
Checkin all my traps and on my hoes – Life is
{*imitating Todd Shaw*} Too $hort! I stay on my toes
G’d up – I spill ‘Gin & Juice’ on brand new clothes
Pull up, hit a switch and drop the back
On the prowl in the black hat, lookin for cat
I got a chrome plaque that reads “Who’s the Mack?”
{*imitating DJ Quik*} Black Pussy! Always talkin bout it cause I love it
This ‘California Love’ got a nigga drunk and budded”

Knoc loves to have fun, and loves to give it up to all his West coast influences, from mainstream acts like N.W.A to icons of the underground like Volume 10. Supported by a bevy of bangin’ beats, he achieves his goal to rock and roll his way through life, hip-hop, and this album. His gangsterish “Click-Click” featuring Slip Capone and Yykkes sounds like an underground Royce Da 5’9″ banger. “Love Slave” is an ultra slick smoothed out freaky tales joint produced by none other than DJ Quik, sounding like “Bad Intentions Part Deux.” Warren G hooks up what might become the new West coast anthem for 2004, “What We Do” featuring him, Xzibit and Nate Dogg all pumped up to the maximum. And lest you think that Dr. Dre didn’t get a beat off in this piece, he can be found on the subtle and ethereal “I Like.” What’s impressive to note is that all four of these songs come BACK TO BACK right after “Peepin’ Tom.”

That’s what “The Way I Am” is like – certified top notch shit that comes back to back, one joint after another. It’s hard to find a song to front on – the futuristic “Change This Game” produced by Damizza, the soulfully reminiscent “Until the Day” by LAC Productions, the bouncy “Have Fun” by Timbaland and the Precision blessed “Never Stop Thuggin” featuring Lil’ Mo all follow one after another. It seems that in spending the last two years crafting this album, Knoc-Turn’al strove for just one goal – consistancy. He achieves that goal, despite a wide range of different styles and motifs, presented over a wide range of different beats by different producers. This ain’t that soft-ass, false-ass shit that you used to, Knoc-Turn’al got the bombs that’s type crucial. Be impressed, because Knoc came dressed with finesse. Llistening to him, you know you’re vibing to a hip-hop star of the now and for years yet to come. Get you some.

Knoc-Turn'al :: The Way I Am
8Overall Score
Music8
Lyrics8