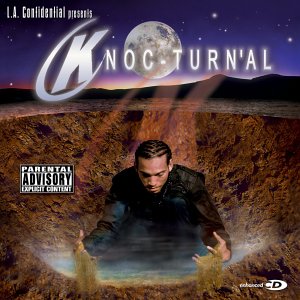 Sometimes it’s just too easy to be right. When looking through the Sunday circular for this week’s new albums (contrary to popular belief I don’t know when they come out any more than you do) I noticed that Knoc-Turn’al was on sale at Best Buy for $4.99. I turned to my wife and said, “Damn this shit’s cheap – even if it only has two good songs it’s still cheaper than the twelve inch singles or an EP would be!” Even then I was making plans to hit the store today.

Here’s the catch though – this is not a full-length album. If you saw this ad or perhaps one for a similar discount electronics/music store but haven’t gone to get that shit yet, this is your advance warning. We all know that the record labels COULD afford to sell a full-length album at that price, because they’ve been releasing new albums for $6.99 their first week for at least the last twelve months. Six songs for five bucks is not a bad deal though, especially when you consider that it’s “THA MOTHAFUCKIN KNOC” as Missy Elliott likes to say. Dr. Dre’s next big thing is stepping out, but surprisingly this EP is not on Aftermath at all; else this release would have been called “Aftermath Presents” instead of “L.A. Confidential Presents Knoc-Turn’al.”

Don’t panic; Dre hasn’t abandoned the upstart rapper at all. He produces the “Str8 Westcoast (Remix)” and co-produces the hit single “Knoc” we all know and love; and his protege Budda handles the beats on “Cash Sniffin’ Noses” featuring Slip Capone and Too $hort. The breakout song on this EP is Knoc’s latest single “Muzik” which has aCRUNCHY beat by Kayne West, who is quickly becoming a hitmaker on par with Timbaland, DJ Premier and Rockwilder. The lyrics could’ve been an afterthought with this song but Knoc still rocks a unique interpretation of just what “Muzik” is to him:

“She’s thick, she’s bad, so clean, she’s fine
She loves, she hates, she laughs, she cries
She hurts, she lies, she’s Bonnie I’m Clyde
She’s ghetto, she’s real, she sings, she rhymes
She comes, she goes, she lives, she dies
She’s sexy in thongs, she blows my mind
She stays in line, she’s smart, she’s funny
She’s crafty and cunning in the game she’s running”

The Hater-Ade drinkers among rap heads might be tempted to say, “Well that shit’s simple – anybody could have done that,” but those same thirst quenchers made the same comments about Juvenile’s “Ha.” If it’s so easy, why didn’t you do it first? It doesn’t matter though because if Knoc has learned one thing from his time with Dre it’s how to make hits. Maybe that’s why the “Str8 Westcoast (Remix)” is actually a sequel to “Bad Intentions,” except this time Knoc is rapping and Nate Dogg is doing the singing. If that wasn’t good enough, Shade Sheist, Warren G and Xzibit all drop some rhymes; the latter showing he’s long overdue for a new album:

“It’s two-thousand and two, my backpack raps
got my backpack, strapped and filled with plaques
I ain’t relaxed or laid back at home with my feet up
I drop product – lock and load, heat the streets up!
You weak fucks; shakin and dancin
Y’all takin pills? We takin penitentiary chances
I’m too advanced it’s, never the same
When I hit it and quit it you wanna come get it I’m widdit
When I say that I’m widdit that means
I got a mean defense team that’s gon’ get me acquitted”

Knoc’s rhyme style and delivery is ultimately the break point to whether people will love or hate this EP. It’s actually reminiscent of early to mid-90’s New York rap, when a lot of MC’s were experimenting with rhyming on and off the beat instead of sticking to structure. Think of it this way – if you were trying to make a chihuahua walk a straight line from one end of the block to the next, what are the odds he wouldn’t stop to sniff every fire hydrant and woman’s behind on the way? He still gets there eventually, just making a lot of unscheduled stops in between because he feels like it, and that’s the way Knoc raps. For Knoc the style works even when it shouldn’t, because his laid back rap style mixes the pimp attitude of Suga Free with the vocal style of a weeded Snoop Dogg.

It’s often been said before in reviews that if a rapper would cut his weak material and release a shorter album of his best shit, it would not only be a better product but score higher in record reviews. With songs like the posse-all-in “Let’s All Roll” produced by Fred Wreck and Knoc’s self-produced “LA Nite-N-Day” being just as tight as the songs already mentioned, six tracks of tightness pass by before you can even blink. Knoc-Turn’al proves that when GZA said “Too many songs, weak rhymes that’s mad long; make it brief son, half short and twice strong” he was 100% on the money – and so too is the Knoc with this excellent debut EP.