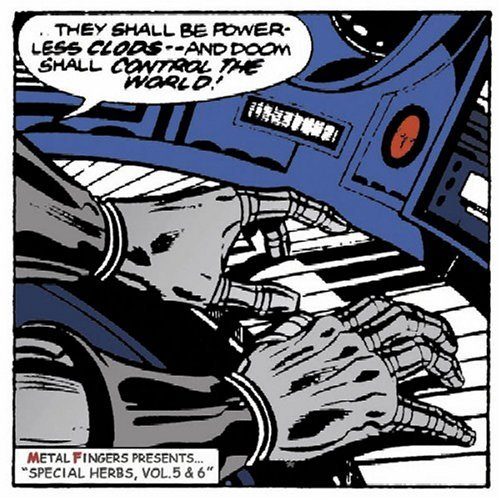 MF Doom – the demented mad scientist of hip-hop music and culture. In truth that might even be an understatement. Although he started out in the early 1990’s under the moniker Zev Love X, personal tragedies and an ever evolving mind have spawned almost as many alternate personalities as Kool Keith. The comparison’s apt when you consider that like Keith, all of these personalities may sound similar vocally, but each presents a different style and/or ideal musically. You just can’t put the MF Doom of “Operation Doomsday,” the Viktor Vaughn of “Vaudeville Villain” the King Geedorah of Monsta Island Czars and the musical stylings of Metal Fingers into the same category. They’re each unique, interesting, and independent facets of a man whose TRUE indentity may never be revealed. Like a great luchadore, MF knows the mystique of the mask can make the man behind it much more popular than he’d otherwise be.

Choosing once again to wield the persona of Metal Fingers, the composer who fuses various unrelated elements into a sonic hip-hop harmony, the MF’er has unleashed his newest set of introspective instrumentals. He has dubbed each set in this series his “Special Herbs,” which you’re free to interpret as either the ingredients he cooks up or the buds that he tokes up. It really makes no difference, because when Fingers nÃ©e Doom is inspired by his herbs, he serves up some of the best sonic concoctions to be heard anywhere. The only disturbing or hard to comprehend part of the magic that MF wields is why even after four previous volumes he still occasionally feels compelled on “5 & 6” to end tracks abruptly, with no warning or smooth volume fade-outs. As much as you can enjoy the tracks in progress, hitting the harsh ends is like the mental audio equivalent of smacking into a brick wall. Perhaps that’s why MF has a Metal Face after all – to protect him from the sudden impacts.

At just over forty-six minutes and thirteen tracks in length though, “5 & 6” may just be the strongest and most concise concoction that Fingers has brewed up to date. Starting with the loping “Pennyroyal,” each song builds elements together in ways that might seem casually simplistic but exhibit hidden depths. “Lavender Buds” is downright shocking in it’s epic beauty – seemingly tailor made for a smooth R&B singer to croon over, but teasingly shy in delivering the goods by only giving up brief vocal snatches over it’s carefully interwoven pianos, bass and drums. “White Willow Bark” is something closer to familiarity for old Doomsday fans, sounding synthetically electronic and yet perplexingly deep and rich in it’s overall impact. Just as the beat seems poised to achieve an orgasmic climax, Fingers pulls back and starts again, letting the instrumental build to a much richer and deeper aural joy. “Orange Blossoms” has a lilting flute and soft cooing vocals that achieve the opposite effect – far from being soft, they are actually haunting and spooky in a pleasantly chilling way. “Coffin Nails” is some straight up finger snapping foot tapping funk you can’t help but jam out to, and the “Kava Kava Root” is just as deep in it’s many different elements as it’s name would imply.

Things are no less intriguing or intoxicating on the album’s second half. It’s nearly impossible to pin down where the “Valerian Root” is going, showing no fear in breaking from one bass chord to the next with a technique that seems as off-key and yet perfectly considered as a DJ Premier classic like “D. Original,” particular when the keys tie the melody back together. “Jasmine Blossoms” is the most challenging to listen to cohesively – the beatboxing is almost amateurish yet quixotically the song could not flow without it’s beat and the thrown in stabs of some old school b-girl crew saying “SUPER!” as the glue. If you can quaff this thick brew, you’ll be ready for everything else that follows. “Black Snake Root” is some appropriately Shaft-like blaxploitation funk. “Horehound” is a demented revisitation of The Electric Company, given a huge adrenaline injection of bass and hip-hop attitude PBS never even thought about. “Dragon’s Blood” leaks through a little bit of that MF Doom personality again, with such high powered comically inspired drama you may want to shout “Holy Metal Faced madness Batman!” The “Myrtle Leaf” that follows it is thus organically refreshing. It all comes to an end on “Patchouly Leaves,” which appropriately enough sounds like it draws from nearly every technique Fingers has in the loops and samples it melds into a thoughtful, yet slightly weird, whole.

While the album’s back cover promised some “enhanced bonus footage” that this reviewer had neither the time nor patience to pursue further, “Special Herbs, Vols. 5 & 6” hardly needs such extras. Call him whatever name you feel like, but on this latest installment of instrumentals to please the hip-hop soul, you can hardly call MF whack. With this kind of alchemy up his sleeve, one can easily believe even the leadest of audio material can be turned into pure rap gold.