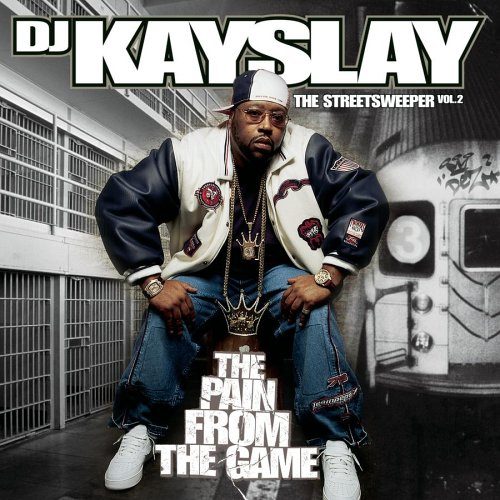 DJ KaySlay :: The StreetSweeper Vol. 2 – The Pain From the Game

Emerging as music’s true voice of the streets, mix tapes are an undeniably effective way for aspiring MCs to get their voices heard and their music felt. With rap heavyweights such as 50 Cent, Fabolous and Joe Budden all having parlayed mix tape verses into major label deals, this musical outlet seems to be hip-hop’s quietly dominant trend in 2004.

One of the biggest names in this mix tape market is DJ Kayslay, the self-proclaimed “Drama King.” The streets have hailed Kayslay the champion amongst urban DJs, awarding him with several Justo Mix Tape Awards while buying his mix CDs at a rapid pace. Kayslay has always been both controversial and extremely relevant, featuring notable battle records between major artists like Nas and Jay-Z, to even the recent feud between fresh voices Joe Budden and The Game.

May of 2003 saw the release of Kayslay’s first studio-recorded album, “The Streetsweeper Vol.1.” While including guest shots from some of hip-hop’s biggest names, this album was very hit-or-miss, following one good song with a forgettable one in a seemingly planned pattern. Almost a year later, Kayslay has released the follow-up, “The Streetsweeper Vol.2: The Pain From The Game”, a tour-de-force of diverse rap music that easily puts its predecessor to shame.

The guest list on this record is untouchable, touching all genres of hip-hop while flaunting the largest figures in the game. The opening track is a fantasy-like collaboration, pitting Southern legend Scarface with Wu-Tang’s complex wordsmith Ghostface in a lyrical “Face Off”. The cinematic Heatmakerz production fits the MCs perfectly, as both ‘Faces spit flawless bars with no clear winner emerging. Before you can recuperate from the audio assault of “Face Off”, G-Unit contributes the hard-hitting “Angels Around Me”, a track armed with energetic verses from members 50 Cent, Lloyd Banks, and Young Buck. 50 Cent’s superstar associate Eminem checks in on the menacing “I’m Gone”, proving why he is easily the best lyricist in the game today. Fellow Detroit native Obie Trice manages to hold his own alongside Eminem on this track, but Slim Shady shows how that his intimidating skills are as dominant as ever:

“I murder the scene as soon as I touch the page
You ain’t gon’ have no other choice but to rush the stage
And charge the mic, I hope you have the heart to fight
Cuz you gon’ have to, you ain’t got the smarts to write something that good
For you to come back at me with, what you gon’ do
try to out rap me with that happy shit
You motherfuckers crack me up
talkin’ bout how you’re gonna smack me up
Y’all won’t even back me up
Throw up your paws, you pussies can’t even scratch me hard
It’s like fuckin’ cat’s claws trying to jack me off
You think I’m afraid, cuz you trying to throw some fear in me
You think I’m dumb enough to roll with no security (*gun cocking sound*)”

Lady’s favorite LL Cool J laces up his Timberlands and goes to musical war on “The Truth’, serving a low-key Swizz Beatz creation with one of his most inspired and hungry verses in years. “Hands On The Pump” is a simplistic thug-anthem, as Memphis Bleek, The Game, and the underrated Sauce Money bless Kayslay with quality skills.

Kayslay realizes that the best compilations embrace the partygoers as well as the party-crashers, as he includes a few enjoyable radio-friendly selections. The conceptual “Not Your Average Joe” unites three separate Joes (Joe Budden, Fat Joe, and R&B crooner Joe) in order to whip up light ear candy between the album’s prominent rough-edged moments. Old-school fans will find a liking to ‘Don’t Stop The Music”, a club-ready offering featuring Lil Flip, Lil Mo and E-4O paying homage to the upbeat and infectious nature of rap’s early era.

The Drama King stays true to his reputation on “The Streetsweeper Vol.2” by giving several talented rookie MCs chances to shine. “Through Your Head” finds newcomers Jae Millz, Angelous, Cashmere, Trife, True Life and The Bad Seed ripping the impressive production from Stay Gettin’ It with equal amounts of focus. One of the album’s standout tracks, ‘Alphabetical Slaughter” a creative listen where the currently unknown Papoose blows listeners away with rhymes following along with the 26 letters of the alphabet. Papoose never pauses to catch his breathe after he first ignites the rock-hard Stay Getting’ It beat with:

While this album is an overall successful endeavor for Kayslay, it isn’t without some significant missteps. A song boasting Prodigy, Raekwon, and AZ should be a sure-fire winner, but “Untouchables” ends up being painfully boring due to sub-par verses and a lame beat. “Celebrity Love” turns a questionable premise into a definite loser, wasting a soulful backdrop with nearly laughable verses from female television and radio personalities LaLa, Tiffany, Steph Lova, and Sunny. A dizzying verse from Twista slightly saves the frantic “Get Retarded” from the Diplomats’ monotonous deliveries, while Cam’ron’s “Harlem” suffers from headache-inducing audio samples that drown out Cam’s words.

Despite these weaker tracks, though, Kayslay has ultimately put together a disc sporting enough highlights to make it worthy of your hard-earned money. “The Streetsweeper Vol.2” is loaded with collaborations that would be hard to find anywhere else, giving this release a special quality. Like he did on “The Streetsweeper Vol.1”, Kayslay wisely falls to the back and lets his guests control the show, thankfully neglecting his annoying ad-libs heard on his street mix tapes. Creating an album that will surely please all hip-hop audiences, DJ Kayslay’s latest lets the world know why he truly is the king of hip-hop’s street scene.