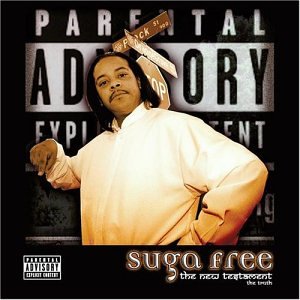 Suga Free. Don’t mistake the name. It’s not implying that this rapper is without flavor, although you could say that his pimpish raps are NutraSweet. Since his full-length debut on 1997’s “Street Gospel,” he’s been internationally recognized as a king pimp of hip-hop. Oh sure, a lot of MC’s TALK about pimping, or claim to be the second coming of Ice-T, but Suga Free is undoubtedly the only one who SOUNDS like the rapping version of Bishop Magic Don Juan. It’s written all over every word he spits, with a high Quik-like voice that sounds like it’s rubbed in sandpaper, mixed with HELLA West coast accentuations. He casually and effortlessly rolls phrases off his tongue about being Pomona’s perfect pimp, simultaneously as fly as Twista and as old school as “The Mack.”

Before you take a tall drink of that Haterade (TM) and ask why you haven’t heard about Suga Free before now, don’t trip. Yes, Suga Free had DJ Quik production on his debut, which made it a surefire hip-hop classic. The problem is that DJ Quik has always been able to make at least one or two songs on his albums radio accessible, while the raw uncut misogyny of Suga Free could even make Howard Stern blush. Therefore, “Street Gospel” was a word of mouth album – those who knew about it loved it, those who didn’t know about it never even realized they had missed out. Some of the other hater-made out there might be saying, “Well good! Who needs another misogynistic rapper anyway?” As Free himself would say, stop trippin’ bitch! Too $hort’s been recording rap records for two decades running, and ain’t nobody telling him to clean up his act. Despite what the FCC or the American Family Association might say, there’s nothing wrong with his rap. The real life act of pimping is of course flagrantly foul, but it’s not as though Suga Free is looking to convert millions of squares into pussy pushers. He’s spitting game for the same reason Ron O’Neal and Richard Roundtree made movies – and I don’t think anybody mistook those films for documentaries on how to be a bad-ass.

With “The New Testament,” Suga Free hasn’t changed a GOT DAMN THING. While he looks rather casual on the album’s cover and in the liner note photos, listening to his rap you can just as easily picture a floor length pink mink fur coat and a purple hat with a long feather in the brim. The Quik produced “Don’t Fight Da Pimpin'” remakes the Too $hort and Rappin’ 4-Tay classic and exemplifies this album in fine style – the fine style of taking the world’s oldest profession and talking about it, that is:

If you’re not disturbed by Quentin Tarantino films or Hustler magazine, there ain’t nothing you’ll find wrong with Suga Free. In fact, the opposite is true. He comes up with zany out of this world punchlines in his pimp talk like “bitch such a disaster with that square shit, Red Cross wouldn’t give her coffee.” You can’t help but laugh! Of course, any amount of pimp talk can take a pimp walk without the right music, but this album takes everything “Street Gospel” was and amplifies it. Over half of the album, from the extra fat layered notes of “Why U Bullshittin’ (Part 2)” to the final “Outro” rings with the beats that continue to make Quik one of hip-hop’s most under-recognized superstar producers. Even the non-Quik songs are still fly though, such as “Revenge of the Nerds”-like Poindexter synths of “He’s Pimpin’ She’s Hoein'” by Fastlane, the sultry sounds and vocals of “You Just Won’t Stop Talkin'” and a song that could ALMOST pass for crossover – the extra EXTRA smooth Frank Nitty “Did I Do Dat.” Unmentioned on the album jacket or the shrinkwrap, this album also comes with an extra DVD of Suga Free home movies, concert footage, and videos with a LOT of big booty females. Can you hate on that? I sure as hell hope not! “The New Testament” makes no apologies for what it is, and neither should Suga Free. In a world full of flavorless artists and musicians, the irony is that even with the name Suga Free he’s got more sweet than 98% of the street and can give you a buzz better than a Saturday morning bowl of Trix.