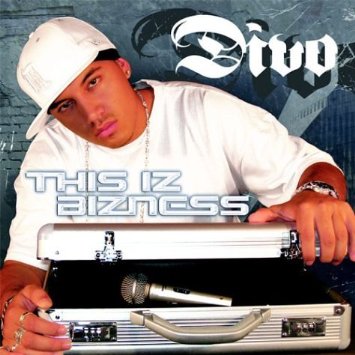 Canada isn’t the center of the hip-hop universe, but it is full of underground artists, waiting for their break into the rap scene. Kardinal Offishall, Buck 65, and Choclair are just a few of the artists who have made a splash south of the border. There is certainly no shortage of talent coming from our upstairs neighbors. Divo is trying to add another name to the list of hip-hop success stories with “This Iz Bizness.” His third full-length album, following “Sparks of Friction” and “The Evolution Theory,” represents the culmination of his work as an emcee up to the year 2004. He’s looking to break through to the American mainstream with a blend of club hits, battle tracks, and introspective slow jams.

Divo is far from a one-dimensional person. Born in war-torn Guatemala, his family relocated to Canada when he was young. Since age thirteen he has been writing rhymes, and in 1999 he started his recording career. In addition to his musical aspirations, he has a graphic design company to balance with his budding career as an emcee. Needless to say, Divo has his shit together. And “This Iz Bizness” could do even more to solidify his status as an up-and-coming rapper, not just an entrepreneur. As the title suggests, he certainly isn’t taking this endeavor lightly.

The album opens with a concise intro on which Divo rhymes for about 45 seconds. The music faded out right when I was starting to feel it, but it served its purpose of getting me properly amped for what is to come. Track two boasts a beat reminiscent of Biggie’s “Machine Gun Funk.” Entitled “Anything I Desire,” it serves as a passionate description of Divo’s ambitions as an emcee. With lines like “I’d rather get paid to spit/than have to slave like a bitch,” he paints a picture of what he’s trying to accomplish in the rap game. He also demonstrates a serviceable flow, weaving his words around the beat with some expertise. Unfortunately, he doesn’t really cover any new ground. If anything, it works better as a battle-rap, because Divo comes off as very confident in his skills. The “trying to get recognized” angle is pretty worn out, so luckily he injects a bit of braggadocio into his rhymes. This makes me believe in him more than anything else.

The two following songs are obvious attempts at radio play. “Love Of The Block” actually is quite catchy, and the R&B hook is a surprising success. It isn’t anything special, though, and ends up sounding a little forced. “Take Me Home” featuring Sumeet, however, is downright irritating. The production is horrendous, composed of finger snapping and an annoying whistle sound, and this time the hook should have been left out. Luckily these are the only two songs of this type on “This Iz Bizness,” because by track 5, the listener will be looking for something new. It’s not that I dislike club songs, it just takes a truly involving beat and memorable lyrics to reach success, a formula that neither of these songs have. “This Iz Bizness” probably would have been a better album without them.

“Wreck The Mic,” featuring DL Incognito, is the only true standout on the album. The beat has a simplified, DJ Premier-esque boom-bap sound, complete with scratched vocal samples of Cormega, as well as Guru’s verse from “DWYCK.” Divo does just what the title suggests, spitting:

“He don’t chill with you, I’m real with you
He’s too commercial, he’s too underground to build with you
What’s the difference, if it’s dope it’s dope
If I’m feeling your shit I’ma let you know”

This is simply an excellent song, and I wish he had included more of the same on the album. A couple of other standouts fill the album out a bit as well. “How We Do,” with Titus, is an excellent uptempo track with heavy-hitting drums and a beautiful orchestral sample. Divo turns this one into an anthem of sorts. “Under Pressure” is driven by a piano loop that sounds very much like “Who Shot Ya,” and is a solid posse cut. “Move Remix” boasts the most interesting production on the album, combining horns and a repetitive bell sample with pleasing results. Unfortunately, the rhyming is not terribly memorable, and disrupts the flow of the song. Despite this, the “Move Remix” is a needed inclusion to the album.

After a solid first half of “This Iz Bizness,” featuring several memorable joints, the second half begins to drag quite a bit. The production loses its edge, with more simple, understated programming, and several of the cuts just don’t have any energy. There are far too many guests, and the songs that don’t have guests on them (“U and I,” “Show Luv”) are standard, slow R&B odes that don’t bring much to the table. There is a scattered gem or two, but they are few and far between on the tail end of the album. Essentially, there is nothing wrong with the music, but there is also nothing unique or even remotely inspiring. With the relative strength of the first half of the album, it is too bad that it gets bogged down towards the end. Divo could have avoided this by cutting out some of the weaker parts, which would have made “This Iz Bizness” much more concise and enjoyable.

Originality isn’t the only thing wrong with this record as it winds down. I didn’t hear enough of Divo on the second half to really get a feel for his vocal style or flow, and this is truly disappointing. Guest appearances abound, and he doesn’t give himself enough time on the mic to show the listener his skills. Even when he does have a song alone, he doesn’t explore terribly diverse subject matter. His attempts at revealing his personal side are not involving because he avoids intense topics that a rapper such as Eminem might disclose. He has some ability, he just needs to think more about what he wants to say, give himself space to say it, and hone his skills for his next effort. Divo is not an astonishing wordsmith, certainly not on the level of Pharoahe Monch or Jay-Z, but by maximizing his ability, he could become a great lyricist. He just isn’t there yet. Of course, the fact that he splits time with numerous guests doesn’t help.

“This Iz Bizness” has the elements necessary to be a much better album. Divo, with his rhythmic flow, exudes talent at times. Unfortunately, at other times the music is mediocre and his rapping is uninteresting, and there are too many of those moments to ignore. R&B hooks abound, most of which don’t fit, and there are few production highlights hidden amongst the numerous generic rhythms. Of 19 tracks, there is one great one, a handful of good ones, and plenty of filler. Divo is on his way, he just needs to refine his rhymes a bit, and put together a complete album. “This Iz Bizness” is a shaky effort, certainly not great, but with work and refinement, his next one can be.