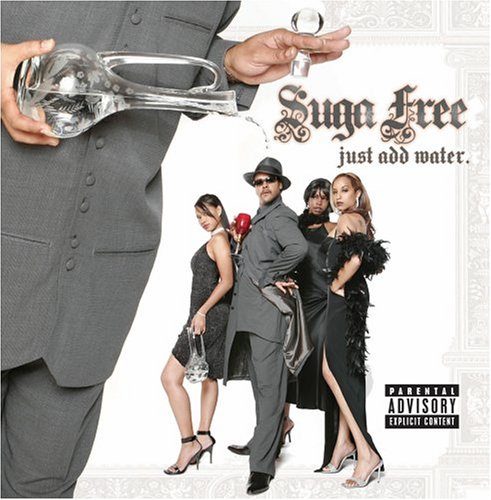 I must confess, I’ve been sleeping on the Pomona pimp in a major way, and in Suga Free’s own words that would make me a “Square” with a capital S. Despite Suga Free boasting a strong affiliation with my favorite producer, DJ Quik, and hearing him on various projects, I never got around to picking up a Suga Free solo. But during a week where the most intriguing new release had already been sent to me as a promo, my option for a rap fix was between Suga Free’s latest and Lil Troy’s Scarface diss record. My curiosity almost got the best of me as Lil’ Troy’s alleged evidence of Face being a federal informant was sure to be at least entertaining, regardless of the truthfulness behind it. But in the end I decided to give Suga Free a chance based on appearances by both Snoop and Mannie Fresh, and the Pomona pimp did not disappoint. “Just Add Water” is a dope album that’s dripping with California funk and destined to be one of this summer’s top albums in the car and at BBQ’s everywhere.

One big thing stands out when it comes to this Suga Free album, the fact that DJ Quik doesn’t produce one joint on the entire CD. The two have been rumored to have problems but Suga Free shouts out Quik in the liner notes, so this could just be the result of Suga Free trying a different set of producers on for size. Thankfully, though Quik didn’t make any of the beats himself, Freeze, Kenny McCloud, Poochie Ross, Blaqtoven, and others come through with high quality west coast bangers track after track. Freeze is the album’s main producer and contributes pure west coast funk, including the distinct high-pitched west coast synths and laid back pianos on the syrupy sweet “So Fly.” Freeze’s mastery of the slick west coast sound doesn’t stop with the lead single as he crafts funky horns around a dope bass line on “U Know My Name” and drops another radio friendly sonic melody on “Boyfriend.” Other producers’ contributions maintain a surprisingly consistent vibe with Freeze’s work giving the album a great overall feel. Poochie Ross’ bass heavy and bell assisted “Put Your Hands Up” adds a little bounce into the mix. Kenny McCloud drops two solid, but very different beats. “U Ain’t Knowin” features a funky beat with plenty of bounce that serves as the centerpiece of the track. “Suga Cain” centers around some dope electric guitar riffs, but still brings plenty of energy. Through and through, the production on “Just Add Water” maintains a very consistent and familiar west coast vibe but avoids sounding repetitive or even cliche.

Suga Free himself is always guaranteed to come with is unique style and personality. Whether he’s jumping from a soulful falsetto to a straight up rap or pimped out vocal tirade, Suga Free is sure to entertain. Being a pimp, quite literally, Suga Free’s songs focus around the world’s oldest profession (I mean the pimp had to come before the ho, didn’t he?). “So Fly” captures the essence of Suga Free as he spits game to those who don’t know:

“One day I heard somebody say, if it’s good to you then it must be good for you
But bullshit, cause niggas shrinking, getting skinny than a motherfucker
I bumped my head, when I should have been dead
When I was mislead â€“ And I like it
Ok, Man y’all better quit lying to your girl
You’d be surprised what she’d do for you man, cause that’s your world
If she can help you do better, if you sit down and talk
And we all know that shit be sounding like Whomp-Wh-Whomp-Whomp
But if you sincere about what’s coming out your mouth
And you’re telling her ass what this game is about
Man, she’ll run for you
And every time you wake up and get G’d up and brushed up, this bitch’ll roll a blunt for ya
And you know what’s so sad
Way over half of you niggas will never get a chance to experience that
You think she chilling with her friend again
Man she walking down the strip so she can make her some ends
I keep my nails done, I speak well, watching my cholesterol
Live on a body of water and enjoy drinking alcohol”

And while there is plenty of pimping to go around on tracks like “U Know My Name,” “The Ranger” and “Boyfriend,” Suga Free drops plenty of summertime music appropriate for all occasions. “How I Get Down” finds Suga telling grown ups to “get your hands away from that BBQ and let the kids eat first” and shouts out his lost homies including Mausberg. “If You Feel Me” takes the saying “pimpin’ all over the world” literally as Suga drops a verse with a Japanese singer. Overall, no matter what topics Suga Free addresses, he remains entertaining and even makes you laugh with lines like “ah man, this is touching like a butterfly landing on a little retarded kid’s hand.”

Suga Free is a unique figure in the rap game; a rapper with plenty of personality and the style to back it up. Even without DJ Quik, Suga Free manages to drop a dope album with banging beats and catchy songs that will have the most conservative person rethinking the evils of pimping. With 19 full tracks, there was plenty of room for filler material, but Suga Free avoids dropping even one weak song. Add a dope Mannie Fresh remix of “So Fly” at the end of the album, a few skits by Free himself, and comedian Katt “Money Mike” Williams adding comic relief throughout and you have a highly enjoyable, well rounded album that is sure to get plenty of spins all summer long.