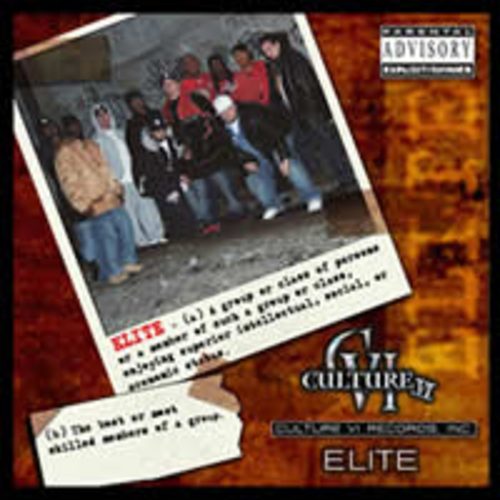 Any form of music has its highs and lows, and sometimes when you listen to a lot of low quality music, you wonder if there will be anyone to come to the rescue. Culture VI is a very refreshing album that shows a sense of hunger that will give any pessimist hope.

The statement on the back of the CD says “Hip-Hop History Starts Now” and anyone who can be so bold should definitely be prepared for ridicule. But Culture VI, a 12-member collective from Elmhurst, New York, will not have a hard time proving the reason behind their musical missions. “Elite” sounds cocky, but the 17 songs on this CD may prove them right. Musically they are all about the keyboards and synths, with the occasional addicting sample, but that’s where the comparison to a lot of today’s hip-hop ends. The power in the music is complimented by their powerful lyrics and flows, distinctive and different enough to bring back memories of the first time one heard the Wu-Tang Clan or Derelect Camp.

But even those comparisons aren’t appropriate, because some might think they’re trying to be like the Wu. Not at all. What does stand out is the “family vibe” that a few crews have, and this is why Culture VI works. The production is very nice, most of it produced by YZ (not the same YZ of “Man With The Master Plan” fame). One of the best songs, “The Legacy”, introduces most of the people in Culture VI, but I wished the instrumental had a bit more punch as it sounds like it lacks a bit of bass and a snappy snare. As for the rest of the album, they take you into their world and mess up your head until they’re damn ready to get you out. One of the best tracks is “Apocalypse Now”, featuring a rapper by the name of Juganot. The soul vocal sample at the beginning is definitely a play on The Doors’ “The End”, but once that fades, Juganots venom begins to sink in:

“I was conceived by a superpower who ruled the world with an iron fist
I was discovered by a world reknown scientist
And the plan was to reduce the population of man
By creating some type of internal assassin
Blastin’ flesh with guns wasn’t enough
Not everybody carries burners but everybody fucks
Big bucks invested for this sick, twisted
Demented plan so diabolical
Forget about guns, make the weapon biological
And blame it on niggas in Africa fucking the animals
And spread it through the media, there’s never been a seedier
Scheme since genocide of sickle cell anemia
Dreamin’ of a way to slay large quantities”

From exploring the possibility of what faces us to what faces us in closer circles, “Authentic Tribute” takes a passionate look at the concept of family and what keeps many of us going even when things seem to fail on a regular basis.

What I like about the music on this is that it’s very anthemic, filled with loads of motion picture incidental tracks that definitely help add a visual to each of these songs. Lyrically, each of these guys are ruthless and raw, yet well-controlled. It could have easily slipped into something mediocre, but that world should not be mentioned alongside the Culture VI name. “Up in Smoke” may appear to be some kind of hazy Cheech & Chong tribute until you start playing the song, and becomes something more meaningful.

Culture VI are more than ready to be on a major label, but I’m almost afraid to say that in case they may lose the hunger each of them present on the album. One hopes they may be able to take over the scene from the inside out.