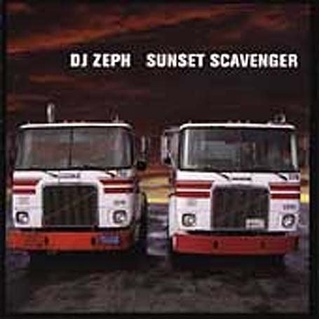 The jazz era was a glorious period in music. It is looked upon much like the 60’s as an era when music paused for one beautiful second in time, and completely enthralled a nation in warm rapture. Today however, the uncanny, enchanting era of Jazz feels great and golden with reverent admiration, but distant and petrified in power. Like most great acts of improvised art, ensuing generations find it impossible to emulate, or evoke the same majestic satisfaction, except through hardened nostalgia. This is certainly true of Jazz. It almost feels like Jazz has been shut away in a box -like a time capsule- and is being protected by its decrepit, bygone culture and creators, like ghosts guarding the beauty they breed. On “Sunset Scavenger,” the second release from DJ Zeph, a fervent Jazz zealot attempts to resurrect that time capsule, and integrate it with modern hip-hop.

“Sunset Scavenger” is a surprisingly comfortable mix of Jazz’s sensual sound and Rap’s upbeat kick. The percussion drums, which provide a majority of the beats, are punchy and jabbing. Yet, they jog along with a steady, soft pace that is comfortably close to their jazzy-snazzy roots. Track two is an example of this happy marriage. Plus, guest rapper Lyrics Born sashays a swarthy-smooth flow that mirrors the song’s infectious rhythm perfectly.

Most of the album is composed using completely conventional Jazz instruments. You won’t find any trunk rattling, boom-tube blowers here, just trumpets, flutes, percussion drums, etc. But it’s ok, because any out-of-bounds-sound would only disrupt the overwhelming sensuality of Zeph’s style and irritate the audience’s relaxed demeanor, like flicking the ears of a sleepy friend. However, the album is far from Radiohead hypnotics, the songs have step to them, and swagger too. For instance track 10, “Frogs,” sounds like a Neptunes foot-rattler, only a little N.E.R.Dier. Azeem kills it too with some punchy lyrics over a corky frog croak and nasty bass guitar.

“Let loose the noose and use truth
don’t bite, strobe light through the night
flow hard, spit God, life life
half baked grade-A tape ain’t great
Your wrist cripple, it’s that simple
these mics are not nipples
the clock’s tickin’, the plot thickens
each chump chucks chickens
[…]
Slowly I creep through the world of deceit
And grieve on my feet
Everything seen disintegrates
Like silhouettes cinnamon mist in smoke from cigarettes”

It quickly becomes apparent that Jazz is not the only musical influence on “Sunset Scavenger.” It’s shocking how many obscure genres and musical eras he mix-masters into the album’s dank sound, and it is even more surprising how inherently natural it all feels. There is defiantly some late eighties packed in to the break dance antics of track 7 “FloorWax.” It sounds like an even MORE coked-up Furious Five on a fast-forward flashback. Also pushing the eighties era, Rashaan Ahmed bridges the ten year gap with Tony Touch tenacity and brings us back to the days of side-ways ponytails and cut-off mesh T-shirts.

Zeph throws about everything in the pot by the end: sampling, scratching, international sounds, classical eloquence, eighties hysterics. I’m thoroughly convinced he can mix anything together and make it work. For instance on track 6, “underscore,” a whining violin fades in first, then the bass beat pops open, pounding you back and forth like the heavy pendulum of a grandfather clock, it is followed by some scratching (what would a DJ album be without a little scratching?), next a mandolin drops in outta left field to mimic the scratching, and frankly I just lose track after that. I think a little electronic tickling tinkles in toward the end but I could have been zoned-out daydreaming by then; the album certainly has a neo-jazzy knack for setting your soul at easy.

There are a few problems with the album. First and foremost, there simple aren’t enough raps to go around. The album’s guest appearances are exceptional, but regretfully few and far between. This is very chaffing to the album’s relaxing feel, because it leaves the listener glancing over at the skip button inpatient for the next rapper, instead of calmly allowing the music to subdue them. It’s a strange paradox, because with no MCs on the album, the soothing, smooth music would satisfy just fine. However, the sporadic cameo raps create a rude basis of comparison for the pure jam sessions, washing over straight-up â€“good- musical tracks with a bland, unsatisfying appeal, like Christmas making the other 364 days seem like shit.

Also, the album can feel monotonous, especially in reflection. There is no real evidence to this, the beats are inventive, and the songs vary in intensity and inflection. Yet, somehow Zeph’s sultry swagger seems sodden and overall dampening to his impressive creativity. Here lays another paradox, the album sounds and feels very synchronous of a true jazz pallet. However, it is self-loathing in its own monotony. Its inherent cause seems to relate to today’s listeners. To them, jazz just seems boring. The day of the speakeasy saloon is past, and Generation X is conditioned strictly for romp-roasting rambunctiousness.

Sadly, the album is beautifully depressing. It’s like falling in love with a girl who doesn’t love you back, a lost cause that leaves you brooding and melancholy instead of exuberated. DJ Zeph has certainly proved himself a diligent and cultured composer who has a natural ear for music. But the hope of hearing a hit off “Sunset Scavenger” is about as delusional as seeing the masked MF DOOM on TRL. The high points includeâ€¦well anything with an MC on it. Guests in the Zeph house seem to bring out his most hospitable talents, and you will find his most focused beats. “Sunset Scavenger” will lull the listen into a soft, pastel dream; only to roust their stupor with a nodding head, or a tapping foot -begging them to get up and move. The sun set on the Jazz period over a half a century ago, but DJ Zeph’s is still determined to scavenge through its fleeting, decrepit remains like a zealous historian searching â€“fighting- for a lost cause.