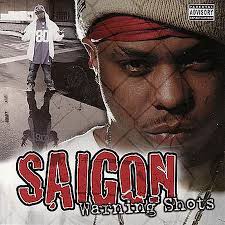 The New York City mixtape scene can be considered a breeding ground for hungry, young rappers hoping to turn street buzz into major label attention. One name that has consistently graced these tracklistings, and even inspired special “Best Of’ editions, is Saigon, a street-raised and conflict-weathered MC with a penchant for speaking his mind. Generating a strong buzz over the past few years, Saigon’s career has been unfortunately plagued by a past jail bid followed by major label neglect, forcing the man to take matters into his own able hands.

Serving as an appetizer for his upcoming official debut, The Greatest Story Never Told, Warning Shots is a collection of previously released favorites and standout freestyles, packaged to display his talents to listeners and justify the high amounts of praise he has received below the radar. Boasting production from proven beat-makers The Alchemist, Scram Jones, and EZ Elpee, Warning Shots is an entertaining listen fortunately flaunting more highlights than misfires.

The first shot fired is “Favorite Things”, a track that unfortunately misses the target and may mislead listeners into feelings of doubt. The corny chorus and lifeless beat instantly pushes your finger to press the Skip button, a move that benefits this release as it leads into an impressive sequence of rugged selections. “Let A Nigga Know” shows Saigon in full battle-mode, serving threats and boasts with a notable sense of confidence. EZ Elpee’s simple and effective piano and percussion combination heard on “Come Again” allows our host to offer call-and-response styled verses, while the dark and menacing “NY Streetz” abandons all gimmicks and sticks to a hardcore formula. The smooth-flowing “Stocking Cap” sports a soul-tinged Alchemist backdrop and finds Saigon still sticking to his thugged-out guns.

While these tracks are successful in showing off Saigon’s skills, they fail to show diversity in subject matter and may be written off as generic “thug music” by haters and skeptics. It isn’t until “L.O.V.E.” that this MC attempts to stretch his creative muscle. On this track, he tackles familiar female-related issues with a witty sense of humor and charisma, which is slightly continued on the light-hearted yet inferior “Huh Mama”.

Saigon is at his best, though, when he attacks social commentary. “Kiss the Babies” is poignant political awareness where he questions our corrupt government and offers solutions for its many problems, all placed over a blues-tinged production. Check out some of what he has to say on the currently controversial war issue:

“It’s the end of the way of life as we know it, this is the last straw
George Bush about to declare the last war
Tell everybody you love that you still love ’em
and if you got kids, then take time to hug ’em
I don’t really think that you know what niggas are facing
We are near the end of a twisted civilization
This isn’t a nation, cut all the money for education
and build more prisons as a replacement
How is it that they can win a war against terror and
in the ghetto we losing the ear against heroine?
Where are all the thoro men, the Martins, the Malcolms
the ones that will lose they life to change the outcome?”

“Pop Quiz (Multiple Choice)” is Saigon at his creative best. Before attacking the negative aspects of our society on the second verse, Saigon’s first array of bars offers up several questions, all accompanied by possible A, B, C, and D answer choices. Consider it an audio Scantron, testing listeners intelligence on sensitive issues without providing any definitive solutions. Take a sample portion of Saigon’s “pop quiz” and see how well you do:

“The fourth question is a question that’s still in me
who do y’all niggas think it is who killed Biggie?
(A) Southside Crips because Puffy owed them a grip
(B) Some crazy Pac fan that flipped and unloaded a clip
(C) Missiles and pistols from government officials
(D) The same cat that came back and sang ‘I Miss You'”

Concluding with four previously heard yet still hot freestyles, Warning Shots accomplishes exactly what Saigon set out to do with this release: keep his street buzz going while generating a new fan base. Compared to the current crop of new MCs striving for commercial acceptance, Saigon is at the front of the pack, at times suffering from common rap problems but ultimately surpassing them with his ready-for-celebrity persona conveyed on Warning Shots.

At his strongest, Saigon is a very talented MC armed with abilities to craft complete songs sprinkled with enough wit and swagger to inspire slight 50 Cent comparisons. Occasional punchlines take a back seat to narrative and crisp verbal showcases, clearly evidenced on The Alchemist crafted banger “Yes’, where Saigon rides the blazing beat to damn near vocal perfection. The problem that Saigon tends to suffer from, though, is repetitive song topics, favoring one-dimensional intimidation rather than exploring his gift of introspection. Being that Warning Shots is not his official debut album, this can be somewhat overlooked, and hopefully when his time comes to truly shine, Saigon will fully show off his chops and capitalize on his potential.