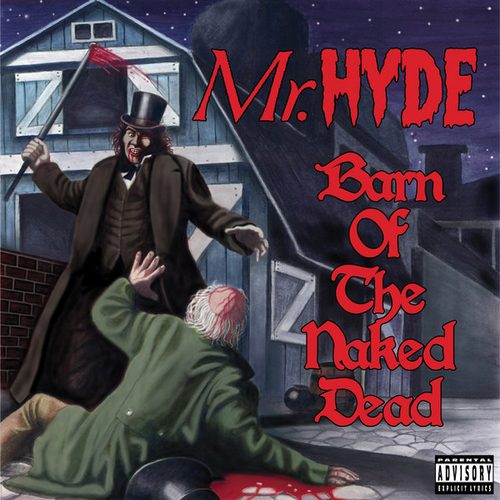 Fans of Necro should be familiar with Mr. Hyde, who has collaborated with Necro over the years. Finally, he gets a chance to prove his worth with an album of his own. If you are into lyrics that tend to be shocking for shock value, with an underlying sense of well thought out verses in the name of gore, Mr. Hyde is for you. In Mr. Hyde’s world, there is no time for partying, drinking, or having fun. Every walk outside is a risk, and every step becomes one step closer to death. Occasionally, what Mr. Hyde will do is quicken those steps in order to get you out of your daily misery. This is the hip-hop equivalent of bands like Napalm Death, Deicide, Mercyful Fate, and Possessed, both were of value but you had to dig deep in order to find out what was really going on.

In Mr. Hyde’s case, it’s about the instant pleasure of cutting up bodies over and over for the sake of personal entertaiment. In “Married To Pain”, Hyde puts it all on the line, telling the listener what one must submit themelves to, with no methods of escape:

“It’s Mr. Hype you fucking whore, best be locking up your doors
Contaminate this floor with gauze, stitch you up to cut you more
Blood is what you lost, you a very lucky corpse
Slicing up like Vietnam people cutting puppy dogs”

Hyde gets like that on all of the songs on “Barn Of The Naked Dead”, it’s as if you’re walking into the house of a horror movie fan, where the imagery of blood and gore is his fetish. Just when you think he can’t come up with something to outsick the last song, he does it again and again. The way he raps too is very effective, it definitely fits the gloomy production of Necro.

Speaking of Necro, he’s not about to stay in the production shadows on this one, for he delivers a verse (in “Them”) that will hopefully get Mr. Hype to sharpen up his lyrical machete:

“God of atrocity, fuck you with five fingers constantly
The monstrosity, king of the scumbags, king of colostomy
My gun bang, we run thangs, give you a necktie
Look how your tongue hangs, it’s bloodbath pornography
Splatterfest, sado-masochist, I paint the walls with your blood
Physical graffiti, cynical and greedy
This is Murder World, welcome to your death after your afterlife
I murder you again, laugh at the burn into your head”

The album is a blood and gore fantasy, a troubling one that gets into the sick mind of the persona known as Mr. Hyde. If you listen to just the gore factor, you may miss out on a lyricist who can pretty much slaughter everyone with their silly sing-song rhymes. “Barn of the Naked Dead” is definitely not going to appeal to everyone, but for those with a wicked sense of the sickness, and for those who wish to listen to unique twists of the “story rhyme”, Mr. Hyde is definitely someone worth pursuing. That is, if he hasn’t pursued you first.