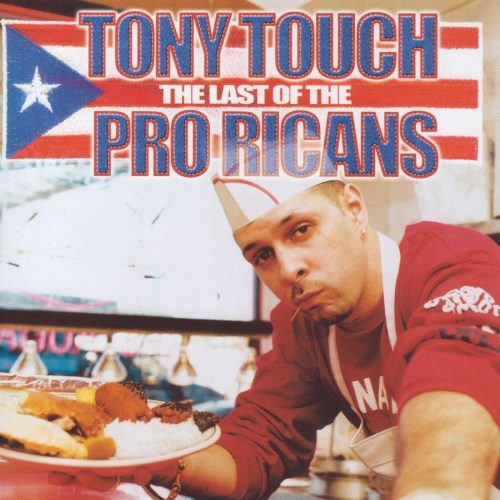 Tony Touch :: The Last of the Pro Ricans

A lot of people carelessly toss around titles like “The Mixtape King” like merely annointing yourself as such gives you automatic credibility. Meanwhile Tony Touch, the self described “Pro Rican” is el reythroughout the boroughs of New York City and worldwide. He was already hot before his shit became official on a major label, but since “The Piece Maker” and it’s sequel hit store shelves, it’s been hard NOTto notice his influence. While other mixtape DJ’s rely on big name guests to host their selections, crow about so-called “exclusives” and say they’ve got “the streets on lock,” Tony Toca eschews gunshots and gimmicks and brings it all back to the roots of the mixtape – all the best songs in one place. Touch is a throwback to the days of Ron G and Kid Capri, and like them he can back it up by not just mixing or selecting but producing and even occasionally spitting lyrics on his own shit.

Between the two major label albums for Tommy Boy and Koch Records, Touch quietly snuck in “The Last of the Pro Ricans” on the strong indie imprint Sequence Records. The opening track featuring Doo Wop “G’z Up” is a return to their successful union as the “Diaz Bros.” from the first “Piece Maker.” It gets you warmed up nicely for the rarely heard track “Best Behavior” featuring Big Pun and Fat Joe. While Toca does at times show bias to fellow hispanic hip-hopers, it’s never to give shine to an undeserving track or MC. Just witness “Capicu” as an example, as it’s an all-star fiesta featuring Fat Joe, Noreaga, Juju, and Tony Touch himself. Juju steals the show on the closing verse:

“What’s goin on nigga? It’s real
Fifty milimeter people-eater, God you kneel
Fuck you nigga how you feel? You fragile like Ally McBeal
Snap you in half, what the fuck is the deal
Junkyard, ain’t no lyin to me
If you lie than you dyin with me Burnin in hell, nigga fryin with me
And I don’t want nobody cryin for me
I want a thousand rounds in the air flyin for me
Cap, cap, ca-cap-cap! So smell the gun powder
Livin in a place you couldn’t get the fuck outta
The Horror, niggaz you know your whole life
try and kill you, can’t even control your own wife
Keep movin, stay underground, I ain’t losin
Life is the deadly decision I keep choosin
Sent like a bat out of hell
For every bitch sittin up in a cell
Keep it funky till we all outta jail!”

While some of the tracks found within are well known like Afu-Ra’s “Stick Up” featuring Big Daddy Kane (originally from “Life Force Radio”), who cares when they’re so good you want to hear them again? Touch is not going to waste your time with songs that aren’t worth hearing twice. The list of producers found on the tracks is an all-star line-up in itself. DJ Premier handles songs like Rise and Shine’s “Gotcha back” and GangStarr’s “Natural.” Juju handles the aforementioned “Capicu” in trademark Beatnuts fashion, along with Non Phixion’s “Suicide Bomb.” Nature’s “What Cha Know” has a hardcore Mega Hertz bounce, Onyx wrecks the bells of war on Havoc’s “Hold Up” track, and Wildlife rip through “That’s Bless” featuring A. Bless coutesy of a fat loping piano and bass selection by Showbiz. By the time Guru gets down on the closer, it’s all gravy from start to finish:

“It’s that wise older brother, that mind-moldin brother
Still that nine-holdin brother, spittin like no other
I smother other rappers as they gasp for air
Came to give you exactly what you asked for here
I’m like a one man task force here
And once again, brains on bend, as I go half with Premier
Here… I’ll give you the mic, psych!
This is my stage kid, you’ll feel my rage kid, tonight
Who’s gangsta, who’s flossin, who’s thuggin, who’s boss man
I’m here to get respect from L.A. from Boston
My celly rings often cause I got the goods
MC’s ride the wood, any beef I got the hoods
Now come come now, what the heck were you thinkin?
Feel the dum dum’s now, leavin you numb while you leakin
I’m speakin, just to let you rap pros know
Ain’t no gimmicks, no phony image, cause I’m a natural”

Keith Elam’s words could just as easily describe Tony Touch. When it comes to making mixtapes, whether they be $12.99 on the rack of your local Best Buy or $20 from your local street vendor, he’s a natural.