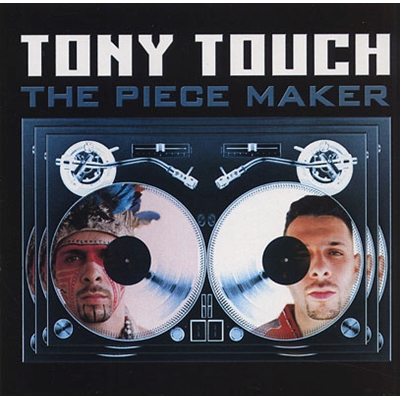 In hip-hop and mix tape circles, Tony Touch is best known as the DJ who brings you “50 Emcees” at a time. Spinning off this game and fame, this modern day Kid Capri has done the same thing Capri did a generation ago: release an album which includes his own raps.

Now understand, Capri’s debut hip-hop album was not by any means “wack” – it was just unappreciated by an audience who was used to seeing the Kid BEHIND the scenes (making occasional cameos) instead of in front of it. Touch seems to have learned from this mistake – he has an all-star regiment of the same kind of MC’s who appeared on his ghettofabulous tapes providing exclusive new songs. In fact, this album has more in common with the Rawkus release “Soundbombing 2” than Funkmaster Flex. Full length, slamming new tracks.

Starting it off on the right note is the new GangStarr track “The Piece Maker,” wherein Guru spends most of his time giving Tony Touch his props. “Well respected, well connected, from Bushwick to Vegas/b-boy fanatic, dramatic on the crossfaders/all my people that love that real shit/ they got love for Tone cause he make em feel shit.” Never thought I’d ever hear Guru give any DJ other than Primo THAT much props.

The Flipmode Squad is unfortunately forgettable, but the DJ Muggs produced “U Know the Rules” has that dark murky Cypress Hill flav’ which unintentionally makes Touch sound like B-Real and vice versa. Either way, it slams. Next up is Tru Masta’s Wu-Tang jammie “The Abduction” with a classic Wu-styled off-beat type rhyme which is set off right away by GZA (who we NEVER hear enough of). Not surprisingly given the guest list of stars so far, we also have a new track from the Likwit Allstars (Xzibit, Tash, Defari) on what is actually a somewhat mediocre track for DJ Scratch but which is saved by the energy of the guest MC’s. This is followed by an all too short interlude by Royce the 5-9 which should have been a full length song.

You’ve probably already heard the next track, “Return of the Diaz Bros.” with the funky “Salsation” horn samples. Even though Doo Wop and Tony Touch are not the world’s greatest rappers (big surprise, they’re DJ’s first) they flow competently and are helped along by a MEGA-energetic track and the humerous rantings and ravings of Roc-a-Fella’s own “Pain in Da Ass” (doing his very best impression of Scarface). For a change, a record label actually made the RIGHT choice on a first single.

“No, No, No” is the next joint up, a smooth flowing cut by the underrated Heltah Skeltah and O.G.C.’s Starang Wonduh. “I Wonder Why?” is even better though. With guest vocals from Keisha and Pam of Total, this disco remake should swing any party and bounce any club. The instrumental alone would give people chills, but the whole vibe is quite simply SLAMMIN. Jennifer Lopez should give Toca a call for HER next remix.

If you’re surprised we’re only halfway through the CD, then you shouldn’t be surprised at the quality of what’s coming up next on this all-star compilation. Prodigy’s solo rap “Basics” is some straight Queensbridge Dunn knowledge (the kind of science missing from M-O-B-B’s last album) and “Pit Fight” is a rowdy party anthem featuring Greg Nice and Psycho Les which would make Tha Liks proud. “What’s That?” is a choppy De La Soul/Mos Def joint that is mad nice here but which MIGHT not be appreciated except by heads due to the sparse bassline.

“The Club” would better succeed there as the Diggin in the Crates fam hits harder and Capri himself shows up for a guest appearance on the mic. “So hear me now, I bring the thunder plus the rumble/then I step back and watch your whole career just crumble” – see, told y’all Capri was no slouch on the M-I-C! A.G.’s verse afterwards though is even funnier though, cause he’s out “pissing on sunroofs.”

Cormega shows up on another one of those “much too short” interludes, but on an album this fat it’s no surprise that a couple people got cut short on mic time. The next two tracks should win mad converts who were undediced on getting the album – the irrepresible SunKiss is on yet ANOTHER track with Big Punisher (how much work did they do before he died) on “The Foundation” and then Eminem and D-12 work together on the new track “Get Back.” Both of these songs are grimy hardcore and mega appealing to lovers of raw rugged raps.

As if this album needed any higher points to close out on, the underrated 8-Off Agallar (former Unsigned Hype winner) is on yet ANOTHER too short interlude (his self produced beat is MAD chunky) and THEN followed by the reunion track “Class of ’87” featuring Kane, Kool G. Rap, and KRS-One. Should we dub this track the Killer K’s? As if in response the following track “P.R. All-Stars” throws mad heads together with well known hip-hop chatta Winchester Yankee and lets you get to feel the flavor of these unknown Borinquen and Taino rappers over Touch’s chunky reggae style riddim.

Building on an already solid reputation in the underground mix tape circuit, Tony Touch keeps his mic time both minimal and unannoying and gives a VERY solid selection of hip-hop’s best artists time to shine on fat new joints. If this was ANY movie’s soundtrack, it would easily outgross the film. High marks to Touch for reviving a field which lesser contemporaries like DJ Clue nearly killed with boring CD’s.