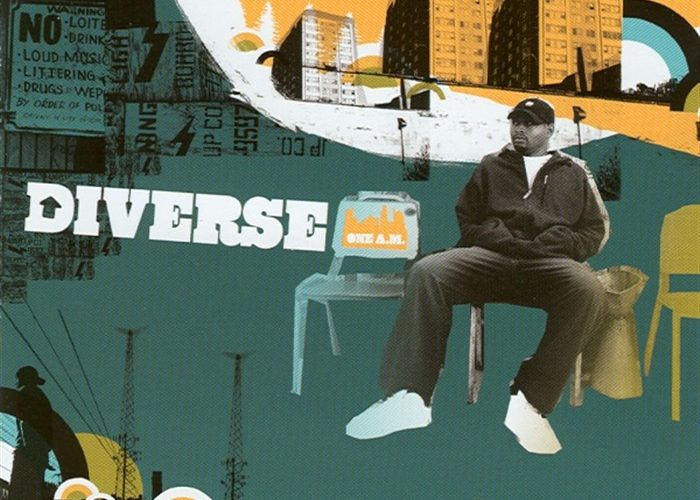 In a time where notoriety stems from flaunting flashy style rather than possessing unquestionable skills, albums like Diverse’s One A.M. are hidden treasures. Being released to little or no press but gaining a strong yet minute fan following, One A.M. has benefited from positive word of mouth to become one of the underground scene’s tightest releases in the past year. The Chicago-based MC has a crisp flow and an infectious charisma, spitting his rhymes clearly while packing them with clever metaphors and expert lyricism. Someone as talented as Diverse deserves more attention than he has been given, and this album is one that puts the majority of major label discs seeing release in the past year to definite shame.

Any album boasting production from beat-maker extraordinaire RJD2 is guaranteed to please eardrums, so the fact that One A.M. features five of his creations is damn near worth the price of admission. Taking Diverse’s well-executed delivery and adding RJD2’s multi-layered sounds behind them equals quality hip-hop music, with both on top of their games in each of their five collaborations found on this album. One A.M. opens up with “Certified,” a banging exercise in “black rock” that thumps with guitar licks, solid drums and faint piano keys and induces instant head nodding. “Uprock” finds Diverse showing and proving nicely over an undeniably funky RJD2 beat, while the bugged-out “Explosive” is assisted by Lyrics Born as both he and Diverse effectively speed up their flows to catch up with RJD2’s spastic yet fluid backdrop.

Vast Aire is invited to bless the engaging RJD2 instrumental on “Big Game,” with Diverse slightly shining above his guest star as he rides the melodically smooth beat punctuated by hypnotizing vocal samples and rolling bass. The moody and eerie feel of “Under the Hammer,” where the gifted microphone-damager Jean Grae teams up with Diverse to attack RJD2’s mind-numbing production, darkens One A.M.’s carefree vibe. “Under the Hammer” showcases the bleaker and more serious side of Diverse, proving that he can handle varied types of subject matter with winning results.

The always-inventive production skills of Madlib are heard on “Aint Right” as Diverse narrates a two-part tale about unexpected death striking those who deserve it as well as the innocent. His storytelling abilities are impressive, strengthened by Madlib’s jazzy and somber beat. The bells and chimes placed on top of “Leaving” convey an introspective aura for Diverse to brainstorm, while “Blindman” calls out those with tainted views of the world.

One A.M. is an extremely enjoyable album, packed with enough sure-fire smokers to heat up any sound system. Those who do not agree will most likely find problems with Diverse’s at times dizzying verbal performances. This kid’s vocabulary is as extensive as any veteran English professor, sprinkling his verses with large words that may force listeners to constantly finger through their dictionaries. This point, as well as the consistent boom-bap of the One A.M.’s production, makes this album accessible to mainly underground fans, with its appeal never reaching radio-influenced tastes. This is a shame, though, because people daring enough to check out Diverse’s blazing debut disc will undoubtedly keep this in their Discmans for hours at a time, becoming absorbed by the purity and genuine musical appreciation exhibited by this promising new MC.