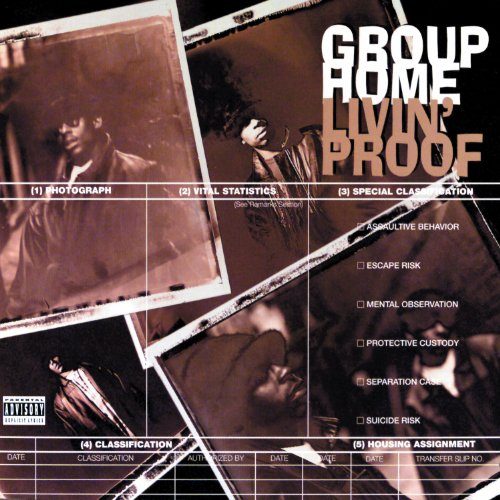 Ask anyone in the game and they’ll tell you: DJ Premier is the man. He’s blessed everyone from Biggie to Rakim to KRS on his own, and dropped 6 albums in 15 years as half of GangStarr. In addition, add Jeru The Damaja’s first two efforts to his list of successes. He has certainly staked his claim among hip-hop’s all-time elite producers with an endless string of classic joints. Without question, Premier has earned his spot at the top.

One of his best moments, and most easily forgotten, is his work on Group Home’s 1995 album “Livin’ Proof.” The group, made up of Lil’ Dap and Melachi the Nutcracker, was essentially spawned by Premier, as they were members of GangStarr’s extended crew. Lil Dap even appeared on “I’m The Man” from the classic “Daily Operation” LP. The duo’s debut came three years later, right on the heels of Jeru The Damaja’s “The Sun Rises In The East,” another great production work by Premier. Due to the sub-par rhyming, “Livin’ Proof” is often overlooked, but it stands the test of time as a magnificent collection of beats from DJ Premier in the prime of his career.

After a short instrumental intro, “Inna Citi Life” kicks it off with a mellow loop and Primo’s trademark scratches on the hook. The following title track boasts wickedly hard drums and a melodic sample. While the music is in place, though, the lyrics leave something to be desired:

“Yo I rock on the block with the real hip-hop
As you start to clock… and jock
Yo, I’m comin’ off with mad rage
Eighteen, and hittin’ the real stage
But don’t worry bout me, cause I’m makin’ it
And if I can’t have it, then I’m takin’ it
That’s how it is, cause I’m livin’ trife
Where’s my knife, take a chance witcha’ life
Rappers decapitate, and disintegrate
You I will mutilate, when I penetrate”

The rhymes aren’t terrible, they just don’t grab your attention at all. The show to see here is Premier’s spectacular production. Every song has various elements to listen to. “Tha Realness” has a mean bassline and Prodigy’s voice is chopped up beautifully. “Up Against The Wall (Low Budget Mix)” has the same 2-second loop over the entire song, tweaked so that always sounds fresh. The lead single, “Supa Star,” is driven by an ill piano stab. All 13 tracks contain head-nodding beats worth checking out.

DJ Premier has a remarkable knack for hip-hop music. Whenever a track is getting repetitive, there will be a surprising switch-up, drum staggering, or vocal sample to keep the listeners on their toes. The crown jewel, “Supa Star” has three separate productions, with the actual song sandwiched between catchy snippets. The sampling can be studied and learned from as well. Think “Daily Operation,” simplified and with a little maturity and you’ll get the idea.

The obvious problem with “Livin’ Proof” is Lil Dap and Melachi. The content of their rhymes is poor, and neither of them has a compelling voice. Here and there, one of them spits a quality verse, but for the most part, they are amateurs on a professional album. Despite this, they flow adequately over Premier’s grooves, which allows the lyrics to blend with the production. It is fairly easy to involve yourself in the marvelous sounds without being distracted by the inferiority of the rapping. With an LP of this nature, that is quite important.

“Livin’ Proof” falls right in the middle of DJ Premier’s golden era. His beats are devoid of the occasional carelessness he has exhibited more recently in his work with hip-hop’s elite. Several of the songs have two beats; one fades out to make way for the other. It is a testament to Premier’s genius that he is able to seamlessly flip two versions of “Up Against The Wall” with completely different tempos. Due to Premier’s handling of each production, the lesser caliber of emcees performing on this album does not detract from the musical brilliance. If you can look past the mediocrity of the lyrics, you will be rewarded. DJ Premier had the New York streets locked up in the mid-90’s, and this is “Livin’ Proof.”