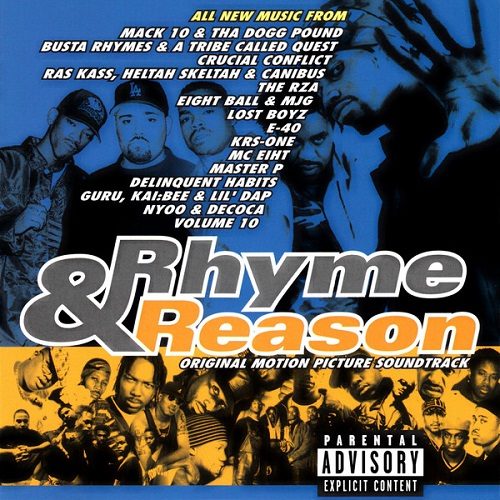 For the past year or so, movie soundtracks have become a separate event on their own, in addition to the actual movie. The upcoming documentary, ‘Rhyme & Reason’, has a soundtrack filled with artists: KRS-One, Crucial Conflict, Delinquent Habits, Ras Kass & Heltah Skeltah. We’re only reviewing the sampler this time, so we got the shit to get you open.

The first single to be released off this album is Mack 10 and Tha Dogg Pound’s “Nothin But The Cavi Hit”. Here’s the West doing a little something to stop this coastal rivalry. When you come to Inglewood, Mack 10’s there welcoming you in, a sac in his palm, which quickly ends up in your hand. You’re taken around the area, and hit a couple house parties. Mad honeys up in the place, and the brew is free-flowing. Cali ain’t such a bad place, is it?

You want ill lyrical skills? Is Busta Rhymes and A Tribe Called Quest good enough for you? They like it “Wild Hot”, and that’s how they bring it to ya. Don’t get too close to the fire, cause you might just get burned real bad. Remember to check your eyebrows on the way out.

Two cuts that are real disappointments are Eightball & MJG’s “Reason for Rhyme” and “Is There a Heaven 4 a Gangsta?” by Master P. The former track sounds like too many songs that have come out of the South recently. There’s gotta be some variation. And as for this Master P character, his track sounds as if he’s trying to act like Tupac. His name is even mentioned in this song, and just doesn’t sound like something original or even unique.

With two flops on a sampler containing only five songs, those odds may not seem to be in our favour. However, some of the artists not appearing on the sampler have produced quality in the past, so this soundtrack is a venture worth pursuing.