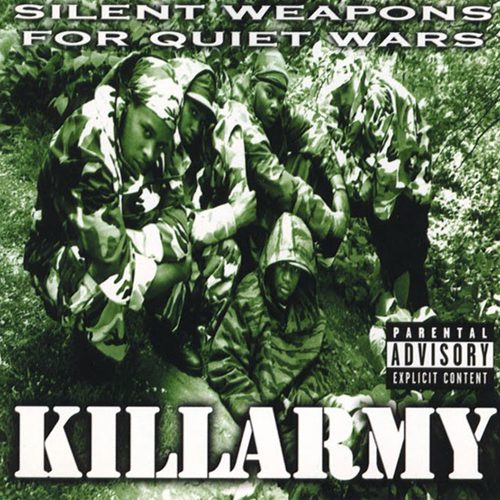 “There’s a war going on outside no man is safe from” may be one of the most chilling lines ever spit by a rapper. Mobb Deep’s Prodigy delivers it so matter-of-factly at the top of “Survival of the Fittest”, that little doubt is left in the listener’s mind that there really is such a war to which one could fall victim to at any given time. And maybe he has a point. After all, a number of attempts to explain our existence chose to resort to martial terminology. Survival of the fittest has been established as one of the most basic principles of evolution. Christians believe that every human soul is caught up in a war between good and evil. Communists interpret modern history as a war waged between the haves and the have-nots. And some historians still like to think of wars as the true turning points in the course of human history. There have been civil wars, guerilla wars, holy wars, gender wars, cold wars, world wars, trade wars, wars on drugs, wars of independence, wars as short as the Six-Day War, or as long as the Hundred Years War. But the war rap music talks about has always been a very specific one.

It’s the war waging in many inner city neighborhoods across the United States, a war nourrished by poverty and unemployment, by drug abuse and repressive law enforcement, by gang rivalries and lacking gun control. It’s an unspectacular war without precision bombing and information warfare, a conflict that in most people’s mind hardly qualifies as a war. That’s because it’s a war most of us ARE safe from. If the recent events in Iraq and elsewhere tell us anything, it’s that war is not a word to be taken lightly. Ernest Hemingway, writer, war reporter and world war veteran, put it this way: “Never think that war, no matter how necessary, nor how justified, is not a crime.” Although those who lead others into war often promise just, short and clean wars, the sad truth is that all wars eventually reveal their true nature, causing us to look away in disgust. But war is also a reliable tapestry for heroic tales and human tragedy, making it a recurring theme in the arts. Especially its heroic aspects continue to fascinate us, just think of the current box office smash “Troy”, a movie about a mythical war fought thousands of years ago. Consequently, the war reports rap music has delivered to our doorsteps have presented us with a fair amount of heroes, the most recognizable of which remains the late Tupac Shakur.

Many war stories have been told through rap music, some undoubtedly true, some possibly made up, but one act took the concept further than everyone else – the group Killarmy (pronounced Killa-army). One of the earliest projects on Wu-Tang Records, Killarmy was generally perceived as a camouflage-clad analog to the Wu-Tang Clan. Their earlier recordings such as “Swinging Swords” (promo single from 1995), “Wake Up” and “Seems it Never Fails” (released in 1995 under the Wu-Fam umbrella Population Click) featured NY-based members Killa Sin, 9th Prince and Dom PaChino (AKA PR Terrorist). By 1996, the group’s producer, 4th Disciple, had introduced MC’s Beretta 9 and Shogun Assason from his hometown Steubenville, Ohio to the group, who now was ready to release “Camouflage Ninjas” b/w “Wake Up” as their first official single. A sixth rapper, Islord (who worked as an assistant engineer on “Only Built for Cuban Linx…”), was mostly absent from their 1997 debut because of a jail sentence.

“Silent Weapons for Quiet Wars” came at a time when references to war were already a common occurrence in hip-hop. Sista Souljah’s battle cry “We are at war!” had long faded away, when the male rap world began to mobilize, as evidenced by mid-nineties song and album titles such as “War Games” (OC), “Tradin War Stories” (2Pac), “War” (Royal Flush), “The Art of War” (Bone Thugs-N-Harmony), “Bells of War” (Wu-Tang Clan) or “The War Report” (Capone-N-Noreaga). Master P’s plan for world domination unfolded as his ‘No Limit soldiers’ occupied airwaves and store shelves in increasing numbers, while Brooklyn’s Boot Camp Clik finally came together for a joint operation on “For the People”. Not everything made a whole lotta sense. Too often, these war reports came from a soldier’s perspective, not a general’s, leaving the listener wondering who was at war with who, and why.

“Silent Weapons for Quiet Wars” was a little bit different. But no less confusing. Each soldier, it seemed, was engaged in battles of his own. Killa Sin was the one with the hood tales. Shogun Assason may have been the only one with any real experience in the armed forces, proclaiming that he “served active duty in the army,” later stating more precisely: “I catch a flashback from Iraq / that’s when I start terrorizing tracks.” 9th Prince (RZA’s younger brother) seemed on a warpath against the Christian church, while Dom PaChino was everything from an “ancient warrior trapped in Castlevania” to a “Puerto-Rican Terrorist from the Middle East / refusin’ the mark of the beast,” “wagin’ guerilla warfare,” while at the same time engaging in “counterterrorism with precision.” To the casual listener, Killarmy’s motives are likely to remain a mystery. Even those familiar with more militant forms of rap music will have a hard time pinpointing what this crew’s mission really is. At best, you can say that “Silent Weapons for Quiet Wars” is a post-Desert Storm, pre-millennium, pro-black rap album that uses manifold metaphors and analogies relating to war.

This album may be hard to summarize, but that also means that it isn’t one-dimensional. Drawing inspiration from all kinds of sources, it covers the full range of war-related imagery, in victory and defeat, in attack and retreat. It begins with their choice of weapons, which include everything from Excalibur and other “legendary weaponry like crossbows” to futuristic miniature homing missiles. Conspiracy theories, comic books, political history (“Nat Turner was my militant ancestor”), historical wars and last but not least movies have all contributed to the camouflage collage that is “Silent Weapons for Quiet Wars”. The kung-fu flick quotes in “Universal Soldiers” will remind you of the Wu-Tang connection, but the samples in “Under Siege” and “War Face” take you deep into the Killarmy realm with excerpts from ‘Full Metal Jacket’. Rich in detail, this album comes close to a peace activist’s nightmare, stacking military reference on top of military reference. To say it with Shogun, Killarmy “plant a time bomb in your ear / and hold your brain for hostage” for exactly 64:45 minutes.

With its wealth of references, “Silent Weapons for Quiet Wars” is wide open to interpretation. It was almost inevitable that someone would start to dig up lines like “The mission be assassination, snipers hittin’ Caucasians / with semi-automatic shots heard around the world / My plot is to control the globe and hold the Earth hostage / in my fingertips with tight grips like Atlas / See, I got a warplan more deadlier than Hitler / it was all written down in ancient scriptures” when it became known that the sniper that held the Beltway area at gunpoint in October 2002 shared some of the same rhetoric. That conspiracy theorists, searching for coded language, would like to see a link between 9/11 and lyrics like “Ex-con, attack the Pentagon with unorthodox firearms from Vietnam,” or think of suicide bombings by Islamic extremists when they hear “Shit is deep as I walk into danger / blowin’ up spots with bad vibes and anger.” But likewise, a statement like “Criminals in the army engage in war games / cause we’re living in the last days” is likely to remind you of the inhumane methods of investigation the US used at the Abu Ghraib prison in Iraq. Heck, if you listen close enough, even the infamous Unabomber says hi when 9th Prince talks about “scientists found killed and wrapped up in curtains” and describes himself as a “professional assassinator professor.”

But in the end, “Silent Weapons for Quiet Wars” is a work of art that nobody in his right mind would mistake for a militant manifesto that should be taken literal. It offers us a look through the scope of a soldier, who’s maybe more concerned about the death trap that is the ghetto than about the illuminati installing a new world order: “Don’t sleep on the average cat, he’s packin’ steel” is the conclusion of one of their choruses. Or as Shogun puts it: “Let’s go to war with breakbeats / my battleground is in the streets.” And occasionally, Killarmy even remember that hip-hop too has its fair share of battles, as Killa Sin declares: “It’s war for all you rap acts who’s wack.” Constantly switching between figurative and literal, Killarmy prove that they truly are “Universal Soldiers”. At one moment, you can be witness to Sin robbing a crack dealer at the beginng of “Burning Season” and spending the rest of the song on the run, the next, you bump into a haunting rendition of the Irish traditional “The Wind that Shakes the Barley” at the top of “Blood for Blood”, before Dom PaChino paints the following scenery: “Deep in the hot sands of Savannah stands a rhymin’ Highlander…” Beautiful.

Being quite an intense experience, this album once led this reviewer to speculate that “Silent Weapons for Quiet Wars” was the album that “Wu-Tang Forever” should have been. That Killarmy had become the Wu-Tang Clan of 1997, that 4th Disciple was the next RZA. Not quite. The Wu double disc has overcome the initial disappointment, while after two more albums, Killarmy’s weak points stand out more clearly. Unveiling a “militant chamber that’s hidden,” the seven go at it with that same warrior spirit, but their lyricism is far from as refined as the Clan’s, their personalities far from as charismatic. Nonetheless, their intent to construct “deadly poetry over murderous melodies” was realized superbly on their debut, thanks to 4th Disciple’s inspired orchestration and the rappers being so serious about their military duty. To this day, “Silent Weapons for Quiet Wars” is truly an “adventure like bein’ kidnapped by seven ninjas.” Only that ninjas go much more calmy and focused about their business.