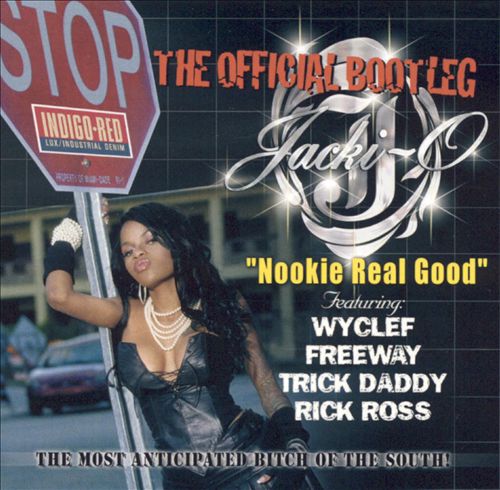 This album’s a little bit difficult to classify. Complete with a gem case, tray inlay and front cover insert, this CD was shipped out by the label TVT Records and it’s “official.” Actually it’s more like an official preview of the forthcoming album “Poe Little Rich Girl.” During the “Champion” remix with Trick Daddy, Jacki-O herself goes out of the way to remind us “this is only the mixtape.” As a result this fully produced and executed CD will probably never see store shelves, unless you live near a college radio station that routinely dumps off it’s promotional copies at an independent CD reseller to supplement their meager budget (or one DJ’s partying and drinking budget).

That’s a shame really. Listening to this album you can presume in advance (no pun intended) that songs like “The Watcher Remix” with a Jacki-O verse inserted into a Jay-Z track won’t make the actual album. These are fun songs to listen to, as can be said of most of “The Official Bootleg.” Jacki-O hails from Miami and reps herself as “Queen of the South.” The self-described “skinny black girl” raps about some of the nastiest things you’ll hear on record. On the aforementioned “Champion” remix, she even tells Trick that “If I suck your dick it’ll cum fast/cause I’ma stick my thumb in your ass.”

Wait a minute – Floridian female MC, talking some nasty sex shit, rapping with Slip-N-Slide noteables like Trick Daddy and Rick Ross? That seems familiar. That sounds like… Trina, who four years ago coined herself “Da Baddest Bitch” in all of hip-hop. Is there something funny going on here? Not at all. They really are two different MC’s, even though they sound an awful lot like each other and could easily confuse somebody who isn’t paying attention, especially given the similarity of their subject matter. It’s been two years since Trina released “Diamond Princess” so Jacki-O can hardly be blamed for filling the vacant slot as rap’s raunchiest female, although when Trina returns expect a war of debauchery one-upsmanship not seen since the heyday of Luther Campbell.

In fact, is there something in the water down Miami way that just makes people freakier in general? Must be a lot of women walking around in bikinis all day (or for the ladies if you prefer, men with six pack abs wearing muscle shirts). Of course there must be something in the water for the athletes too, since college football teams from Florida always seem to dominate division I. Whatever’s going on down there, Jacki-O is not afraid to showcase raw unbridled attitude along with her sexual prowess. She’s quick to say “Fuck Y’all Niggas” to men who aren’t up to her standards, “poe-ass pimps, talkin that shit, actin like a bitch and ain’t got a pot to piss in.” She certainly seems to have gotten or received her share of industry connections on this “Official Bootleg”: Freeway raps on two tracks, Wyclef is on the remix of her first single “Nookie” and Timbaland shows up on and produces “Out of Control.”

This over 50 minute long album.. or bootleg that is.. or mixtape.. whatever you want to call it is definitely a good listen from start to finish. At times on songs like “Take My Breath Away” she sounds remarkably like Lil’ Kim. On the “Sleepwalkers” influenced song “People Change” she sounds remarkably like Foxy Brown. In fact by turns Jacki-O sounds like most famous female rappers of the last four years. This means one of two things – either Jacki-O believes imitation is the sincerest form of flattery, or she hasn’t really developed her own style yet.

There’s certainly nothing wrong from a technical standpoint with “The Official Bootleg” and the album shows strong potential for “Poe Little Rich Girl” to be a surprise hit this year. Artistically though Jacki-O can succeed sounding like others, but won’t achieve the “Queen of the South” title she claims without being more original. She’s got a good start though, so hopefully Trina won’t have Warren Sapp beat her ass for taking her spot. Just kidding! Coincidence or not, the two have a lot in common, and getting people’s attention as a female who takes what she wants verbally and sexually is just one of them. Time remains to be seen if the two of them can both hail from the same part of the country and co-exist peacefully, and if Jacki-O continues to mature into a more distinctive artist.