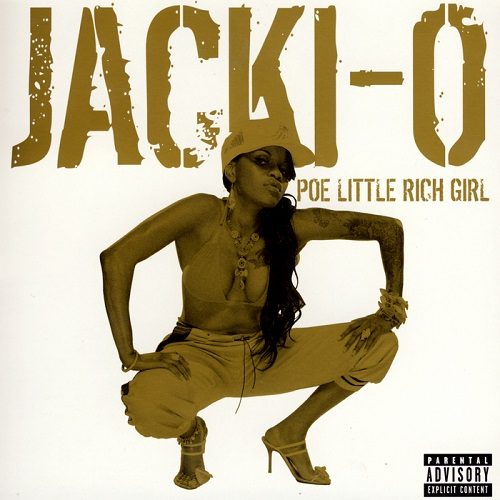 You know, I don’t mean to be an asshole, but you would think artists like Jacki-O would have realised how stale the smuttier-than-thou rap chick persona is by now. Several questions invariably surface when listening to “Poe Little Rich Girl” – “Don’t we already have a Trina?” “Is there really a market for this stuff anymore?” “What is with homegirl’s LIPS?” A confounding listen in every way, this is one of those records that causes me to re-evaluate my overwhelming love for down South music.

It genuinely mystifies me when I attempt to identify the target audience of this record, though I’d assume that she shares much of fellow Miami siren Trina’s testosterone-driven fanbase. However, while Trina’s previous two efforts benefited greatly from the perks of her Slip N Slide membership (dope production, contributions by Trick Daddy) and Southern contemporaries such as Gangsta Boo and La Chat have enjoyed similar nepotistic advantages, Jacki-O’s record is flat and hopelessly uninspired. One might be able to overlook the clear deficiency of quality beats on offer here if Jacki had convincing delivery, but she also happens to lack the intriguing cadences of La Chat and Gangsta Boo, the raw ingÃ©nue of Trina and the versatility of Shawnna. Instead, she delivers tired, sexually lurid content in an appallingly indistinct fashion, a fact that isn’t helped by her utter inability to write a decent hook. Tracks like “Pussy (Real Good),” with its persistent refrain of “That pussy, pussyâ€¦pussy real good, pussy off the chain, go on and do ya thang” are damn near nightmarish, while horrific missteps like “Sugar Walls,” “Gangsta Bitch” and “Ghetto World” don’t fare much better.

Another vexation with this record- what on earth is with buzz surrounding this kid Red Spyda? For a dude who first made waves throwing unreleased Big and Pac acapellas together, his tracks are haplessly pedestrian and amateurish. “Gangsta Bitch” is a tossaway Seven Aurelius track, while “Sugar Walls” sounds like a cross-pollination between the very worst elements of dancehall and go-go. Elsewhere, Timbaland provides one of his laziest tracks to date with “Slow Down” and the usually astute Cool & Dre of Terror Squad are found asleep behind the boards on “Ms Jacki.” D Speck’s “Sleeping With The Enemy” features synths that sound like they were sampled from an â€˜80s MIDI program and even Trick Daddy can’t save the hollow sounding drums of “Champion,” littered with such redundant Jacki-O nuggets such as “I’m from down south, I’ma suck dick and spit it in ya mouth.” Ghostface shows up on an impressive Nottz (SO slept on) composition in album closer “Tooken Back,” but it’s far too little, FAR too late- remove this joint from the album and you have a record that has no redeeming qualities whatsoever. Imagine an album where even the introspective moments (“Ghetto World”) are silly and maddeningly insubstantial.

I’m still scratching my head pondering over the purpose of this record. The niche for explicit Southern femcees has already been filled quite adequately by artists like Gangsta Boo, and the fact that Jacki-O has managed to eke a career on a label as illustrious and well-distributed as TVT is absolutely astounding. More proof that the “New South” revolution is starting to get a little farcical.