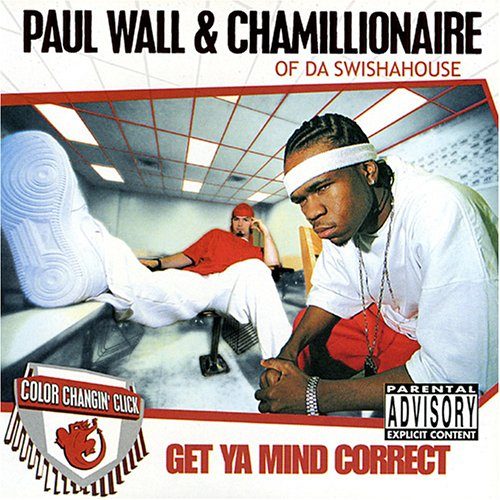 Admittedly this review is a little bit late. Be that as it may there’s hardly a week that goes by that I don’t get some e-mail saying, “I really like that Z-Ro review, but can you give the South a little more shine?” or “I wish you would throw down some more of the Swishahouse fam on there.” Well I’m trying y’all. I go out of my way to pick these albums up as often as I could find them, but the Big O just doesn’t get that good distribution like points further South do. Nevertheless when I spotted Paul Wall & Chamillionaire’s “Get Ya Mind Correct” in stores a few weeks ago, I couldn’t pass it up. Earlier this year RapReviews featured a review from Cham’s younger brother Rasaq in which this album was actually mentioned, so it was time to do the right thing, go legit and get MY mind correct with an official copy of the album.

First thangs first; if you lookin at the front or back cover, Chamillionaire the brother wearing a white sweatband, and Paul Wall is the light-skinned dude who looks like he could pass for Fred Durst. The duo was brought into Swishahouse by Michael Watts after they recorded an intro for his Houston radio show, and there was such strong local demand after hearing it he couldn’t help but put them in the mix. “Get Ya Mind Correct” was their chance to show a larger regional and national audience what the Houston locality already knew – that Paul Wall & Cham were “Thinkin’ Thoed”:

Paul Wall: “To tell you the truth, Chamillionaire’s better than me
His flip-flop shines a little bit wetter than me
But it don’t matter we’re both on the same team
I’m thinkin thoed and I know we think the same thing
I, chop the block like circumcision
Lookin at my chain too hard’ll hurt ya vision
Steppin into my garage should be worth admission
I got deep dishes just like if I worked in the kitchen
I’m thinkin, paint that change everytime ya blink
My rims are 23’s so they old enough to drink
I don’t like dinosuars or Jurassic Park
But the rims sure look Jurassic when I park!”

Chamillionaire: “I’m thinkin pullin so many cars out the garage
that the city will build a freeway that ends in my yard
I’m keepin, big face people in the safe or the wallet
So that man, Uncle Sam, can’t jock my deposits
Hold up, Paul I’m impressed, I thought you was the best
But you just said I was the best – so it’s a tie I guess!
NBA draft teams wanna recruit us
3-point diamonds man, the Lakers couldn’t out-shoot us
Got them, groupies sittin on the Gucci stitchin
And Coupes be flippin, wonderin why the roof is missin”

Braggadocious? Hella. Pimped out? Oh fo’ sho’. These boys is Houston’s finest, some throwed ass players knockin pictures off walls all over the Dirty South. With their rhymes already in tact and polished from years of paying dues locally, it all comes down to the beats. Best believe, when it comes to beats, they got in spades. The heavy pounding pianoes from Bruce Takara on “Falsifying” will keep your bells ringin’. The dirty bounce of Pretty Todd’s work on “U Owe Me” shakes the concrete hard. Bluenote checks in with some floating beautiful shit that sounds extra pimpish next to the hard rhymes on “The Other Day.” The Deep Fried Camp thugs so hard on “Balla Talk II” you expect Mystikal to come flying out over the track at any second. And you can’t sleep on Drathoven, who loves that electronic sound on “Go Grind.”

Over time as you listen to “Get Ya Mind Correct” you can’t help but notice Chamillionaire sounds a little bit like Andre Benjamin – that is the good version of Andre back when he still rapped more than he sang. Paul Wall is not Big Boi though, he’s more like the Bubba Sparxxx of the Houston scene. If you can imagine Bubba working with Chamillionaire instead of Timbaland and Andre working with Paul Wall instead of Big Boi, there you go. You might not think that’s a natural combination at first, but the lyrics show these two Houston hard-hitters have a natural chemistry with one another and that there’s no slackin’ in their mackin’. While you can’t expect anything heavier in the lyrical department than talking shit and flossing big whips, it’s a straight up piece of entertainment for people who love fat beats and big pimpin’. Don’t be afraid to “Get Ya Mind Correct” too with two of Houston’s finest.