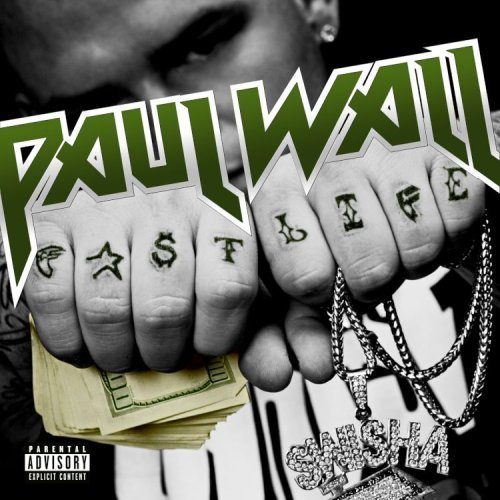 Paul Wall’s hip-hop status was established with “Get Ya Mind Correct” in 2002, but this public’s level of interest in the ice grilled H-Town representative has been far less stable. It seems to have peaked around 2005 with the release of “The People’s Champ” and to have been in slow decline ever since he rapped for Brooke Hogan on “About Us” in 2006. His second solo album “Get Money, Stay True” fared poorly compared to the previous release, failing to reach gold certification, with no single cracking the top 20 of Billboard’s Hot Rap Tracks. It’s likely this was water off a duck’s back for Wall as his iced out grill business TV Jewelry kept on custom fitting rappers with million dollar mouthpieces, and he spent a good chunk of 2008 touring with Ill Bill and Tech N9ne. Regardless of Paul Wall’s mainstream status, he was still getting money and staying true to his swagger and his Southern hip-hop style.

2009’s “Fast Life” comes across as a square middle finger to crossover and pop, digging deeper into his Southern roots and unearthing an all-star album of the grimiest rappers in the region. Even Wall’s lead single “Bizzy Body” features Webbie, although if any song on this disc can be aimed at the radio this would be it. Produced by (and also featuring) Mouse On Tha Track, the sparkling backdrop is matched to a big bass boom with the power to vibrate club walls. The “she a busy body, she a busy body” hook is easy to remember and imitate. While Wall’s verse is misogynistic it’s not malicious – it can be cleaned up enough to go pop.

“That girl get around, all work no play
She stay under me, but trust me, she ain’t that afraid
She want a player with paper to come save her
and move her downtown to a high rise skyscraper
Put that thang on me ’til I can’t even walk
Right now she got a mouthful so baby can’t talk”

The rest of the album keeps it dirty dirty. Gorilla Zoe and Yung Joc show up to get “Fly” on an Antwan Thompson track. Yung Redd and Z-Ro stay loyal “One Hundred” percent over a pounding Xfyle beat, and give Z-Ro props for crooning the chorus too. The closest that Wall gets to the North is linking up with his Kansas City family Krizz Kaliko and Tech N9ne on “Sumn’ Like a Pimp,” although he does reach out West to Oakland to put Too $hort on “Pop One of These.” Otherwise you’re more likely to hear one of H-Town’s representers like Baby Bash on “Lemon Drop” or Lil’ Keke and Trae over the rocked out “Pressin’ Them Buttons,” a track which is a throwback to the lyrical braggadociousness that made his first album stand out:

“I’m in the seventy-five Cadillac convertible drop
On them buttons sittin lovely, go on and grab your mop
Got the parking lot boppin when I drop them screens
I’m on the internet stuntin, I’m the YouTube king
Sittin’ Sidewayz, I’m in a daze, gone off haze slow
Choppin off blades, cause I’m paid, and the cannon spray low”

It’s no coincidence that Wall references one of his biggest singles in the verse. Paul Wall would definitely like to taste that level of sales success again, but he’s found he can live the “Fast Life” with or without being mainstream, which gives this album a Southern swag and fly bop that seemed to be lacking on his last release. It’s appropriate that out of all the tracks on Paul Wall’s, the best may be “Mr. Clean” with Z-Ro, a song produced by Beanz & Kornbread. What could be more Southern than beans and cornbread? Paul Wall may or may not be “The Champ” on the charts but he’s got his niche and he’s staying deep in that cut, which enables him to get money and stay true to Texas all at the same time.