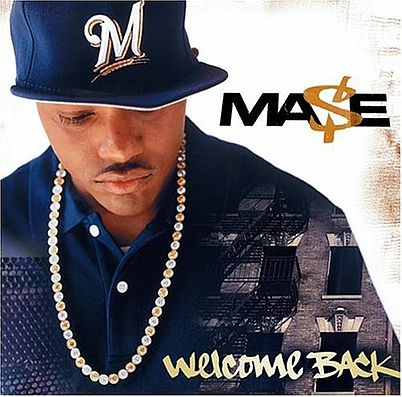 Well, well, well. It looks like Mason Betha came back from giving up the mic to pursue the calling of God. I suppose that there are people out there who were saying, “God damn I was just waiting for that boy to release a new album! I missed that slow-flowing, mush-mouthed Harlem retard who wore shiny suits and let Puff Daddy pull his strings. Where the fuck’s he been? I was just dying to hear some more of his inane music on the radio!”

That’s not me. Personally I was more than happy to hear that Ma$e had given up being a baller to become a holy roller. I thought the mediocre showing of his Harlem World spin-off, the poor sales of his “Double Up” album and the general apathy of both rap and pop critics in general to his simplistic lyrics had finally given the man reason enough to hang up his glitter uniforms and crossover hits for good. Welcome him back? Not likely. After all I may be white, but my name’s not Vinnie or Horshack. In fact if I tell Ma$e to stick a rubber hose up something, it’s likely to cause an enema. The only good reason for me reviewing this album for RapReviews.com is a general lack of enthusiasm from anybody else on the staff to do it. It seems they are about as excited to see Ma$e return as I am.

It’s good to know Ma$e hasn’t lost his knack for perverting classics by other artists, whether or not P. Diddy produced them. I’ll still never forgive either of them for singlehandedly ruining both Matthew Wilder’s “Break My Stride” and Grandmaster Flash & Melle Mel’s “The Message” in one fell swoop on “Can’t Nobody Hold Me Down.” This time Ma$e has made Madonna his target, turning TAFKAM (The Artist Formerly Known As Madonna) Esther’s hit “La Isle Bonita” into some garbage called “Harlem Lullaby.” It’s poetic justice in a way, since Madonna ripped off Public Enemy’s “Security of the 1st World” in her song “Justify My Love” without paying for it or giving P.E. credit, except that in this case TAFKAM Esther is credited and is probably being well compensated to have her song whored out by one of rap’s most mediocre. She’s not the only one. Eddie Kendricks is probably turning over in a Birmingham grave hearing “How’s Your Love Life Baby” pimped out on the song “Money Comes and Goes.” At least that’s a subject Ma$e should know a little something about, if he did indeed give up his worldly posessions to pursue the ministry (the alleged reason for his retirement five years ago).

Intrepid readers, it only gets worse. For some reason Bad Boy can’t resist using “Do You Know Where You’re Going To” one more time on “I Wanna Go” – they should really retire it by now. And to no one’s surprise, John Sebastian’s “Welcome Back Kotter” theme is in the title song “Welcome Back.” Personally I thought it was done best when Onyx recorded “Slam Harder” and that there was no reason to do it again, but if there’s one thing Bad Boy’s been known for over the years it’s recycling other people’s ideas. The further they get away from their Biggie Smalls and Craig Mack roots, the less they have in the tank that’s innovative or fresh. The only two artists they’ve had since who did anything worth a shit, Black Rob and G. Dep, are both gathering dust on the shelf. And they brought Ma$e back instead of releasing a new album from either of them? Their priorities are WAY out of line. Let me put it this way – looking at the liner notes for “Keep it On” and reading that it interpolates “We Don’t Have to Keep Our Clothes On” by Walden & Glass, and I have this interpolation in my own head: “We Don’t Have to Keep it On (Any More).” Time to turn it off.

Frankly I don’t care if Mason Betha is in love with a girl from Mississippi named Tyler. Or it could be Tara. Maybe even Tyra. With his half-assed breath control and microphone techniques, who the hell really knows? These sentiments on “I Wanna Go” flow right “Into What You Say,” which I’m not really into at all other than the fact Rick Rock did the beat. He also produced the album’s “Breathe, Stretch, Shake” single featuring P. Diddy, which is the only good thing I can say about that song too. Generally the music is tolerable throughout – inoffensive in most cases, and in some having enough bass you might catch yourself head-nodding or toe-tapping. That’s generally how Ma$e got away with it over the years – despite being one of the poorest excuses for a “master of ceremonies” ever over the years, his songs became hits not because his raps elevated the beats, but because they were so simple and inane they did not DETRACT from them. After all, if you subtract nothing from something, you’ve still got just as much of something as you did before. For that very reason I suspect Bad Boy will find the correct way to “Welcome Back” the return of Ma$e to the tune of platinum sales and big royalty checks for Mason Betha. I suppose that’s the best thing for Mr. Betha since the calling of God didn’t work out for him, but then again even he admits that rap has changed a lot since the 90’s and all the players are different in his lyrics. The game is new, but it’s still the same ol’ Ma$e. Whether that will help or hurt his chances, only time can tell.