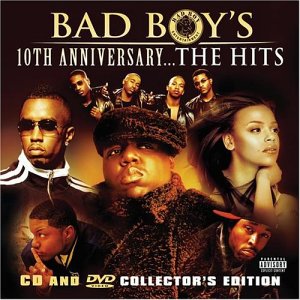 A decade of destruction. No wait, that’s the Undertaker. Actually, that’sBad Boy Records too. Both at times have seemed larger than life, totally dominant over their opponents and basically unstoppable. These may seem like trivial coincidences, but the list of comparisons doesn’t stop there. Puff Daddy’s first solo album was titled No Way Out

, which is also the name of the annual PPV that occurs every year before Wrestlemania. If that wasn’t odd enough, take that the first song on “No Way Out” was entitled “Victory,” and the first track AND lead single off their “10th Anniversary” album is an updated version of the same song for 2004 – now featuring G-Unit members 50 Cent and Lloyd Banks.

Historically speaking though, it’s likely that Sean ‘Puffy’ Combs chose that name for the song as a testament to slain Bad Boy rapper G. Dep, and instead produced vanity projects like the P. Diddy album (a nickname B.I.G. had given him) “The Saga Continues” and the even more self-glorifying and highly inaccurate “We Invented the Remix.”

Having invested his interest into half-hearted, largely uninteresting third tier MC’s like Loon and MTV projects like Making the Band which produced the equally uninspiring group Da Band, Puffy seems clearly to have lost his edge. But just like World Wrestling Entertainment, Puffy is taking the opportunity of an anniversary to stage a grand comeback. While Vince McMahon and company celebrate 20 years of Wrestlemania, P. Diddy and the Bad Boy Family celebrate 10 years of hip-hop. Both have lost some of their greatest stars due to personal conflicts and highly publicized tragedies, but both have found ways to survive even when naysayers (this reviewer included) would have considered them down and out for the count. You could certainly do a lot worse than a compilation of Bad Boy’s best songs from the past decade, but you’d be hard-pressed to do better. Their tragedies and mistakes can’t overshadow the fact they’ve created some of rap’s most memorable moments.

If you’re a hip-hop fan, many of your all-time Bad Boy favorites can be found on “10th Anniversary.” You’ll find it all here, both in lighter fare like “Feel So Good” by Mase and in more hardcore offerings like “Whoa” by Black Rob. The rambunctious and “Warrior” inspired “Flava in Ya Ear (Remix)” is here. You remember it – Rampage’s thunderous attack, LL’s incomprehensible lyrics, and the manic energy of Busta Rhymes in the final verse. And who can forget the classic “All About the Benjamins” when Lil’ Kim declared herself the Queen Bee of rap, while Biggie brashly boasted “fuck the state pen, fuck hoes at Penn State” and captivated a national audience? The B.I.G. songs Bad Boy picked for this disc, from the sultry smooth “Big Poppa” to the R&B duet “Can’t You See” with Total represent his legacy well. Other rappers may feel slighted though. How about a Craig Mack classic like “Get Down,” or G. Dep’s “Special Delivery,” or the classic remix of the latter that brought the two together? And how did Mase rate only one solo cut, when “What You Want” with Total and “Do it Again” would have been equally fine choices? In fact to be honest, a true retrospective of their ten years in music probably requires a two-disc set with at least twice as many tracks. Still, whether you consider him an angel or a devil, give the man his due – Puffy or if you prefer P. Diddy and his label Bad Boy Records have been one of the most influential music makers and industry shakers of the past decade, and the hits on “Bad Boy’s 10th Anniversary… The Hits” reflect at least SOME of that legacy. For what it’s worth, I look forward to 10 more years.