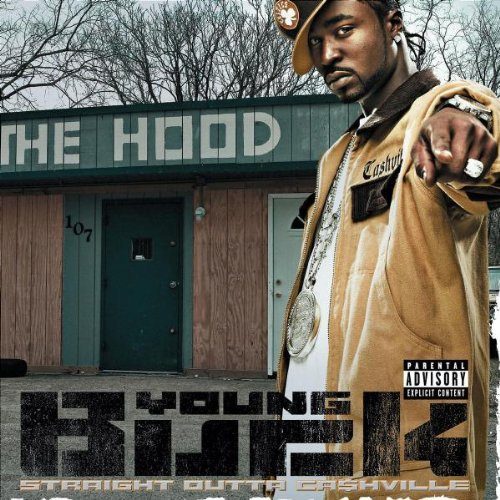 G-Unit goes out of their way to make sure you know who they are. You would have to try damn hard to avoid hearing them on the radio or seeing any of their music videos, unless your favorite genre was country music. 50 Cent set the precedent, coming up from an underground “How to Rob” star to eventually achieve international fame (and almost losing his life in the process). 50 obviously believes in giving back, because his homeboys Lloyd Banks and Tony Yayo were slated as the next to shine out of his crew. Their rep on mixtapes had people hyped to see the G-G-G-G-Unit shine.

There was only one problem – Tony Yayo got sent up on a bid and wasn’t able to make a major contribution to G-Unit’s national debut. Obviously the album couldn’t be put on hold, as all parties involved (from 50 himself to Interscope Records) had to strike while the iron was hot and use 50’s hotness to put the group on a major level. Who got the call to sub in? Young Buck. A relatively unknown Dirty South underground rapper who was just starting to make his name big, Buck’s surprising inclusion in the group not only gave G-Unit a more well rounded sound but made him into an international star all his own. Although Lloyd Banks was the first to release his own solo album, Young Buck is arguably the one G-Unit fans have been waiting to hear from. Buck has the most engaging vocals other than 50. His Tennessee roots meet with New Orleans influences to create the best of both worlds. Buck has the saavy and style of mentor Juvenile with the deep sound and style of Eightball meets Craig Mack. Just say “hahhhh WODIE” instead of “hahhhh BWOY” and you know why Buck was just destined for stardom from day one. All Young Buck needed was one big single to blow, and “Let Me In” served the purpose just fine:

“I feel attention when I walk in the club
G-Unit to the socks, bitches all on a thug
Gimme a Henny on the rocks, and a bottle of bub
I don’t need security, this fo’-nickel enough
I came to ball wit y’all, buy up the bar and all
So bitches call ya hoes, and niggaz call ya dogs – I’m here
If you love ya wife keep her at home tonight
She might never come home again – nigga, aight?
Teeth, neck, wrist, all lights, my life’s like
ridin in Ca$hville and runnin all stop lights
Homie is that real, I pray I keep livin
My momma just had a dream of seein me in prison – damn!
My daddy’s a dope fiend, and I don’t really miss him (FUCK HIM)
Ain’t seen him in 10 years and a nigga still livin
The same old two step we move to a rhythm
50 holla get ’em Buck, you know I’m gonna get ’em, raaah!”

The infectious sing-a-long “I know you gon’ let me shine and get mine/ I know you gon’ let me in with this line” chorus and pounding Needlz beat makes this song the hardest track to crossover in all of 2004. That’s not to say Young Buck is a one trick pony though, or that his “Straight Outta Ca$hville” album is one hot single with a lot of filler. The pulsating “I’m a Soldier” track at the start featuring 50 Cent sounds like a hot unreleased “Beg for Mercy” track. Quoth the Buck: “I come from a small town where organized crime is the rule/you kill niggaz without permission, niggaz gon’ kill you.” Tony Soprano would no doubt approve. The swinging and symphonic “Look at Me Now” featuring Denaun Porter on beats and guest vocals (a.k.a. Kon Artis from D-12) makes it a strong contender for single in it’s own right thanks to smooth melodies and Buck’s heartfelt sentiments: “You wonder why I hustle, my life’s on the line/my baby gotta have milk when she’s crying.” Of course Buck is gonna show love to his compatriots, as David Banner and Lil’ Flip are both on “Welcome to the South” over a loud and raucous Red Spyda beat.

The styles vary throughout the album. “Prices on My Head” featuring D-Tay and Lloyd Banks is a somber journey through the paranoia of having success in hip-hop. “Bonafide Hustler” on the other hand is a G-Unit all-star track, with both 50 and Tony Yayo getting shine on a Diverse beat. Of course you can’t release a big album these days without having at least one Lil Jon beat, and “Shorty Wanna Ride” is actually one of his best – it sounds nothing like any of his tracks currently playing on the radio. “Bang Bang” has Needlz doing his best impression of the RZA/Kanye West style with a surprising Nancy Sinatra sample in the hook. One of the darkest and most intriguing tracks though has to be “Thou Shall,” where Dirty Swift and Bruce Waynne lift from “Smokey Rainclouds” by Andrey Vinogradov (you read that right, trust me) for a song which resonates with emotion but howls with violent rage:

“I’m livin for me now, cause I done went to war with the other side
Lucky me cause the enemy’s mother and brother died
Hotshot gunshells and Teflon chestplates
is tatted on my arm nigga, thuggin ’til my death day
Y’all niggaz just wait, right after my court date
It’s gon’ get grimy like New York say”

Of course people always want to know if the rappers who talk the hard can actually live it the way they spit it. People already know about 50’s credentials from being shot through the jaw, and right or not it did tend to add the air of believability to the stories he spun on wax. Perhaps people will feel the same way about Buck knowing he took two in the back and lived in a hustle gone bad. Regardless of whether Buck banged as much in the past as he does on wax, there’s probably little reason for him to have to any more thanks to G-Unit’s success. With an album of hot beats from the opener to the closer “Walk With Me” featuring new Aftermath recruit Stat Quo (not counting the bonus track “DPG Unit” appearing on some editions), there’s no reason to think Buck can’t at least equal or exceed the solo success of Lloyd Banks, if not outright challenge 50. Without having Eminem as a guest or relying on Dr. Dre for any beats, Buck has turned in an album not only worthy of his new fam but true to his Nashville roots. “Straight Outta Ca$hville” not only unites the East coast with the Dirty South, it proves that when it comes to banging it out the only real difference is the accents.