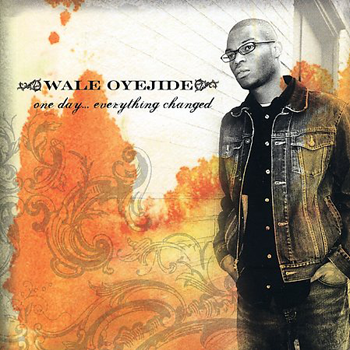 Wale Oyejide :: One Day, Everything Changed

After introducing himself as Science Fiction on last year’s “Walls Don’t Exist” album (Third Earth Music), Wale Oyejide returns, this time without an alias but with his very own vocals complimenting his self-described ‘broken jazz’. Whatever you want to call it, “One Day, Everything Changed” is hard to categorize, covering a musical spectrum ranging from afrobeat to ambient and travelling forth and back between Africa and America. While hip-hop remains the one ingredient all tracks have in common, Oyejide’s music transcends barriers, just like you would expect from a man who was born in Nigeria, lived in the Middle East, and attended college in Atlanta.

Its hip-hop references, lyrical and musical, make “One Day, Everything Changed” a modern manifestation of Native Tongue philosophy, evoking comparisons to the earthy sound of Blackalicious’ “Broken Arrow” and the futuristic retro flair of Common’s “Electric Circus”. “This Is Dedicated To” not only name-checks folks like Pete Rock, the Juice Crew, Black Sheep and J-Live in its chorus and has guest rapper MF Doom remembering “a time when there was no fake gun-clappin’ rappin’ happenin’ / let me know when they done yappin’,” it also sees Oyejide reminiscing by way of Q-Tip: “Back in the days when I was a teenager / before I had status and a pager / you could find Wale listening to hip-hop / you could find Wale on the floor whenever the beat dropped / Nowadays radio only plays the same songs / (…) / It is time, change our ways, bring it back to where it belongs.” Sung, like most of this album’s lyrics, slowly and sustained, with an emphasis on drawn-out vowels. One can assume that this singing style reflect’s Oyejide’s Nigerian roots, but funnily enough, as he keeps repeating Buckshot’s “Don’t front, I know I got you opin, kid,” “This is Dedicated To” turns more and more into an East Coast version of TQ’s “Westside”.

But instead of just waxing nostalgic, Oyejide attempts to infuse his music with the militant message that got lost in the mix as hip-hop became part of the establishment. “There’s a War Going On” is a diatribe against discrimination and disinformation:

On a similar note, but with a harder edge, we have “Riot & Revolt” with its engaging chants and snare-driven drum track, as Oyejide puts his finger on some of Western society’s sore spots. Make no mistake, this is music that advocates a change. Still, it doesn’t rage against the machine the way your typical angry- at-the-world rock band would, rather it throws a party where people can recharge their batteries and exchange opinions, before everyone goes back to their individual struggle against the system. Not a particularly new approach (at least not to these European ears of mine), certainly not new to African music, but nonetheless important in the context of US hip-hop in 2004.

Most of Wale Oyejide’s compositions consist of thick-layered rhythmic foundations, combining carefully crafted basslines and quality beats adorned with percussive elements largely foreign to rap music. Atop of that, we find layered, often African-accented vocals that provide the melodic threads. By whatever studio wizardry – or just by old fashioned musicianship -, the tracks offer enough room to breathe, so that you don’t feel like having to take a timeout from the seamlessly streaming music. That is, if you can appreciate a steady groove and don’t take Wale Oyejide for his ‘broken jazz’ word. Because there’s little of that to be found on “One Day, Everything Changed”. Some selections could actually use a couple of unexpected breaks and jazzy solos. “There’s a War Going On” has a drum programming similar to Talib Kweli’s “Get By”, but without the presence of impelling rap vocals (Jay Dee’s guest vocals remain arbitrary in every aspect), it shifts too slowly. For a track that is less monotonous but retains a hypnotic effect, check the title track featuring Detroit MC Lacks.

In a similar fashion, the singer’s predictable line-by-line singing style can try one’s patience. Thankfully, Wale Oyejide’s repertoire includes a wide range of vocal expression, from the street corner twang of “Damn James” to the blues rock shouting of “Ever After (Part 2)”, from the aforementioned African vocalizations to the Baduizms of “Keep Pushing”. He may not be as accomplished a singer as someone like say, Seal (who’s half-Nigerian), but he’s just as much a musical traveller, surfing on the cultural stream across the Black Atlantic, with the difference that Seal is a professional pop singer, while Wale Oyejide is a musical scientist whose heart beats loudly for Africa and African people. This is best symbolized by “Ibadan Sunrise” and its afterthought, “In the City”, where Oyejide takes you from urban Nigeria to urban America within a matter of seconds. In reality, sound would never travel that fast, but in the universe of music, it only takes one man to cross time and space in one fell swoop. On “One Day, Everything Changed” Wale Oyejide is that man. So rather than charging him for failing to reach the brilliance of a Fela Kuti or the Jungle Brothers, let’s thank him for finally bringing together what always belonged together.