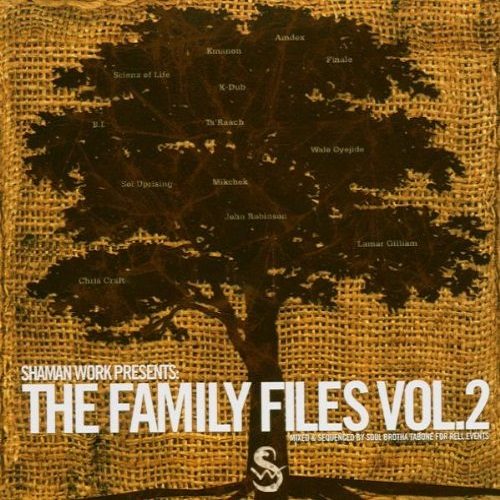 As a label, Shaman Work first registered on this reviewer’s radar when I was assigned to cover Wale Oyejide’s “One Day, Everything Changed.” It was one of those records that don’t quite fit the RapReviews.com bill, offering good, worthwhile music but little in the way of traditional beats and rhymes. The presentation probably wasn’t to the liking of the reader who recently complained that we reviewed eight albums, half of which he had never heard of, and failed to cover major releases by Cassidy and Boyz N Da Hood the week they hit the stores. It’s safe to assume that Oyejide’s album wouldn’t have been his cup of tea either. Thing is, at RapReviews.com we’re damn proud of the fact that we cover underground and mainstream hip-hop with equal dedication. The day you see our coverage of independent hip-hop subside is the day that our own independence is at stake. You might get your Cassidy review on time if that ever happens, but will you be sure you get an honest opinion?

Since I’m more of a traditional beats and rhymes guy myself, I welcome “The Family Files Vol. 2,” a label compilation in mixed form presenting all new music by the likes of Emanon, Scienz of Life and U George. The aforementioned Wale Oyejide invites the Shaman All-Stars to lend some fiery rap rhetoric to “There’s a War Going On (Shaman Family Remix).” Over Oyejide’s percussive yet pensive beat, rappers Aloe Blacc, Lil Sci, Stacy Epps, Finale and Mikchek demonstrate that Shaman Works definitely hosts a pool of talent. Such as the always interesting Dr. Oop, who on “R U Ready” gets his Chuck D on as he comments on the war in Iraq:

“I got a letter from my homeboy, the other day
I opened and read it, I said, ‘You muthafucka!’
He volunteered to bring Iraq terror
Picture him killin’ or dead, I could never
Get a clue, man, you’re not defendin’ us or representin’ us
And ‘be all you can be’? Fuckin’ ridiculous
Exploitin’ dreams of black and latin teens
‘Get a edge on life’ by bein’ a killin’ machine?
Yeah, they lookin’ for ‘a few good men’ – poor brown men
Send you abroad to kill more brown men
But let the warmongers’ sons take the field with guns
Make ’em fight they own wars and there wouldn’t be none”

“The Family Files Vol. 2,” while flowing smoothly thanks to a line-up of like-minded producers and Soul Brotha Tabone fusing everything together on the decks, at times is a disjointed affair. LA’s Emanon and the group’s rapper Aloe Blacc are heavily featured to promote their upcoming full-length “The Waiting Room.” There’s a very brief Metal Fingers “Special Herbs 9&0 Exclusive.” Some guy named Blu does a short Wake Up Show freestyle. Nathaniel and Stacy Epps add a slight touch of soul with sung performances. Mikee and Whizzla, winners of Shaman Work and HipHopSite.com’s “This Is Dedicated To…” remix contest present their version of the Wale Oyejide/MF Doom collabo. It will be interesting to see how Shaman’s latest signing, CL Smooth, blends into the collective, but someone who clearly has a hard time blending in are BI, Broadway and Masco, whose “Drop Top,” tacked onto the end, is a non-descript Down South ditty about smokin’, stuntin’ and ridin’.

Like the low points, the highlights are sparse on “The Family Files Vol. 2.” U George exposes the street hustler/rap star type on “Watchin U,” but despite proper reasoning (“Didn’t have to do it but you just loved thievin’ / in any season / there was no limit / you would only prey on the old, the weak and the timid”), his performance lacks the suggestive power needed when calling others out. Tracks like Synoptic’s “Perfect Imbalance” (produced by Staffro) or Finale’s “Timeless” (produced by House Shoes) are representative of much of the music here, understated, relaxed flows over subtle, jazzy backdrops, always a touch on the Ummah/Soulquarians side of sound. Nothing terribly exciting to be honest, but that may be due to the fact that the focus is on nobody particular. Hopefully, we will find it easier to concentrate when judging announced releases from Emanon, Metal Fingers, Ta’Raach, Wale Oyejide, Lil Sci & MF Doom, Stacy Epps & Madlib, Scienz of Life, Sol Uprising, Beatvizion and Finale. A lot of work awaits the people at Shaman Work, and that admonition is accompanied by only the best of wishes.