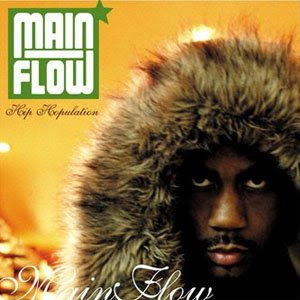 Ask Canibus, constructing an album is far different from early career mixtape endeavors. A nice flow doesn’t necessarily translate to success even on an individual song basis. For starters, the production has to be tailored to one’s voice and style. A whole CD of thematically bland material won’t fly either. Essentially, it is a matter of effort. Most rappers know what the people fiend for, but they don’t always provide. So, while Cincinnati emcee Main Flow already has the needed skills, it takes a whole lot more to move units and get people talking.

While not a household name, Main Flow has certainly been around in the music biz. Starting in 1997 with the debut of the trio MOOD (which included DJ Hi-Tek), he has been building an impressive resume. Working with names such as Killah Priest and 7L & Esoteric has allowed him to hone his skills. He has developed connections galore, and recently has generated some buzz with the lead singles. Now, through Brick Records and his own Wanna Battle imprint, he is set to drop “Hip Hopulation.”

He should get some recognition, because he gets it mostly right. As the album’s name indicates, he is trying to paint a broad picture with “Hip Hopulation.” Despite the ambitious possibilities inherent in such a title, he doesn’t try to do too much. For the most part, it’s just straight solid hip-hop from start to finish. Of course, every joint doesn’t work, and there are a few lesser moments, but there is something for everyone. Main Flow won’t get you thinking too hard, but this is a stellar introduction to one of the underground’s premier emcees.

“Loving the Game” with Planet Asia sets it off. Reason provides the beat, one of several on the album, and the uptempo nature perfectly suits both emcees. The result is a banger, and a surefire college radio hit. While nothing spectacular or innovative, “Loving the Game” will definitely get your head nodding. With many rappers struggling to find their niche, it is great to see two emcees just rocking over a funky track. You’ve heard it before, but it still sounds fresh.

After a couple of misfires, the party is re-ignited. “Such a Fool” with Soulstice is laced with an incredibly smooth backdrop and has serious radio potential as well, simply because it’s so damn catchy. As an added bonus, Main Flow rips the mic quite nicely:

Next, the LP hits a somber note with the magnificent “Is Hip Hop Worth Dying For.” Reason flips a sample that is nearly depressing, but the track is able to maintain its beauty with a hypnotic old-school soul hook. Talib Kweli does not waste his guest shot, and it is clear that something is seriously bugging him:

“Running through your town
Hunting you down for fronting you down
This fucking clown tried to come around for a pound
White boy with a backpack
I overheard talking about Blackstar was whack
And Hi-Tek tracks was flat
Tried to give me some dap
And said I’m in his top five
Emcees that he loves to see perform live
He said ‘KRS was the best, and Redman came second’
He said he like Supernat but he don’t like his records
The Roots was the best live as far as group
He’s like ‘Mos Def’s aight, but what’s up with his leather suit?
I seen him on stage singing and doing rock covers’
… Fucking cocksucker
The first thing I said was ‘get the fuck out my face’
Asshole probably think this got something to do with race”

Unfortunately, the ensuing verse by Main Flow proves that, while his is a formidable emcee, he isn’t nearly in the same league with someone like Kweli. His rhymes are occasionally quotable, but he lacks the focus that could elevate his status to the next level. He’s got the flow and vocabulary, but on the majority of “Hip Hopulation” he can’t quite make the leap. While far ahead of the average, he lacks that little something that makes someone like Ghostface or MF Doom so special.

Several of the songs on this album are attempts at radio play. Fortunately, they are tactfully done. Along with the aforementioned cuts, “She Likes Me” has a heavy club flavor. This collaboration with eLone, which is getting heavy play on college radio, has just the right amount of R&B tint without being overdone. The remix should turn some heads as well. It’s nice to see a well-crafted club track that fits within the context of a more hard-edged album.

Now, the bad news. A surprising number of disappointing collaborations pepper “Hip Hopulation.” A track with Black Thought falls short because of the jerky beat from DJ Vin-Roc, ruining an appearance from The Roots’ frontman. Similarly, “Street Pay” with 7L & Esoteric is too nondescript to work. The beat is only average and neither emcee brings their A-game. Guests like these have the potential to elevate the record, but instead they just provide filler. Even a Hi-Tek sighting is wasted on a brief freestyle interlude. If he had donated some of his magic on the production side, it couldn’t have hurt.

If anything, Main Flow’s new record suffers from not being ambitious enough. There are plenty of songs worth listening to, but a seventeen-track album should have more heat like “Is Hip Hop Worth Dying For.” When any album hits such a high note, the rest of it pales in comparison. This is especially true with “Hip Hopulation,” because much of the rest of the record is relatively uninspired. It’s good music, with solid production and vocals, but after several listens you’ll find yourself rewinding to a few of your favorites.

Criticism aside, there’s plenty to listen to on “Hip Hopulation.” Thankfully, Main Flow easily avoids the curse of “Can-I-Bus.” His first attempt at mainstream success achieves a pleasant balance between rawness and catchiness, and the sporadic mistakes can be forgiven. Several of the seventeen tracks could use a facelift, but for the most part, there’s no reason to complain. The hesitancy on the part of this reviewer is due to the few moments on the record that, if expanded on, could have resulted in a remarkable work of music. As it stands, however, “Hip Hopulation” is a solid entry in a potentially wonderful career.