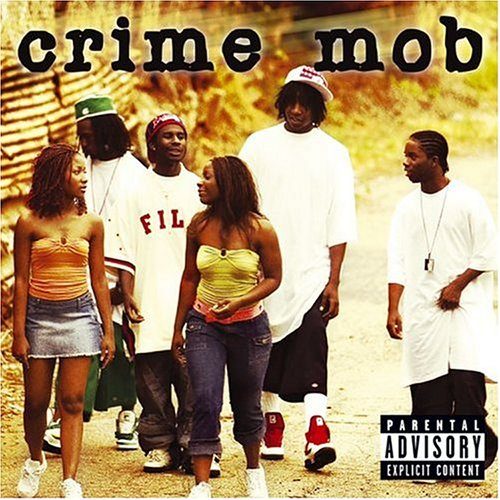 You have to give the Crime Mob credit. Until now, I have never seen any artist who advertises you can get ringtones from their website right on the album cover. Given how popular these bite-sized renditions of hip-hop hits are becoming (wifey even played me a damn good version of Twista’s “Overnight Celebrity”) there’s no doubt this is a very savvy and smart marketing move. It would have been an even more blockbuster move if they had given away the ringtones for free – sadly they’re $2 and up. Just imagine how much free publicity the Mob would get if every time your phone rings you’re helping promote their self-titled debut album. That’s absolutely fucking brilliant. Hopefully by this time next year, hundreds of artists across the board will be giving away ringtones. After all, a happy cell phone user with a lower bill may just spend that extra money on your CD, especially after hearing it so many on their phone it gets stuck in their head.

One wishes the same street smarts in self-promotion had translated into lyrical acumen on their album, but the Crime Mob don’t reach that plateau. As a matter of fact, they fall far short. That’s not to say that “Crime Mob” isn’t an interesting album, especially if you’re a lover of crunk music. The Mob uses that hardcore dirty South sound to the fullest on their lead single (and what will undoubtedly be their most popular ringtone) “Knuck if You Buck.” Combined with a guest verse from rising star Lil Scrappy, this is the one track on the whole album guaranteed to push units. Peep their game:

“Well I’ma gat totin pistol holdin nigga on yo’ damn street
Stompin jumpin bumpin and we crunk off in this damn thing
Throwin dem bows up at deez hoes they screamin ‘n bleedin from they nose
But we start to swing we make them niggaz hit the flo’
Ain’t no game off in this thang, we be deep off in yo’ party
Crime Mob niggaz get it started, and we niggaz be the hardest
So – if a nigga come and run his mouth just like a ho
Punch ’em dead up in his nose and stomp his ass down to the flo'”

Now to be fair and/or perfectly honest, expecting a lot of highly intelligent lyrics on most “super crunk” albums is the exception, and not the rule. In fact the general feeling seems to be that the more crunk you are, the more violent you are, a trend dating back to “Tear Da Club Up” if not further. That’s not to say the rule holds true across the board though. OutKast, Ludacris, T.I., 8 Ball & MJG and U.G.K. (free Pimp C) have all proved you can be crunk and commercially successful by being both crunk and clever; mixing their verbals with both soft and hard beats while beating up punchlines and dropping more gems than Jacob on tracks. Crime Mob clearly doesn’t give a fuck though. It’s not just their attitude, it’s their whole style of rhyming. Say something really violent, rhyme it with something else, repeat ad nauseum. While Lil Jay can produce head-nodding beats, songs like “Stilettos (Pumps)” prove that even the group’s female rappers Diamond and Princess can get as ignorant as the men:

Princess: “I can look jazzy, act nasty wit my stileto heels on
But if a ho says somethin, tries me, then her hair will get thrown
I’m turnin heads left and right soon as you see one foot step out the car
Strollin through the club, then I make my way right by the bar
Yeah yo’ nigga eyein me, I take him from ya so watch out
I’m lookin jazzy actin classy, but I got a sexy mouth
Hair is done and nails are too, and I match from head to toe
Then to top it off I’m rockin 6-inch black stilettos ho”

Diamond: “Stilettos on my feet, I’m sexy wit a mug
I’m buckin on y’all haters just to see if y’all crunk
We swangin throwin bows, cause y’all boys thought we soft
I’m knockin heads off, I’m the baddest of ’em all
Makin niggaz fall, man they fightin and they tusslin
Club owner scared that the gurls might start bustin
We crunk and we thuggin, we takin it public
This is for the gurls in the trap steady hustlin”

Hip-Hop has had successful nasty girls before, from the bad bitch Trina to the sex addict Lil’ Kim, but both have more style in their flow and humor in their rhymes than these two do in their little pinkies put together. If you hadn’t gotten the idea already this album was monotonously thuggish, song titles like “I’ll Beat Yo Azz,” “Fuck Niggaz,” “Ain”t No Joke” and “Put Yo Hands Up” ought to give you the idea. There is a Lil Jon produced bonus track at the end of this forty-seven minute album, but that’s only if you can last long enough to get there. As much as I’ve given Three 6 Mafia shit for pairing good beats with bad lyrics in the past, I’d have to say now even their rhymes seem fresh by comparison. I’d give this one a thumbs up for the beats only but even that’s marginal. Ironically enough I’d say pay the $2 for whichever ringtone matches a song you like, and save $10 over buying the album.