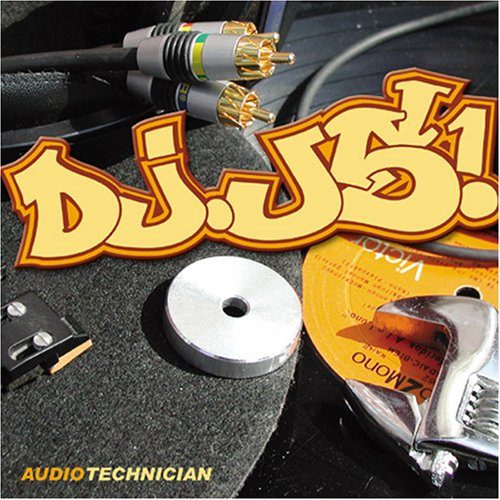 Check the stats: DJ JS-1 has been touring the world with Rahzel since 1998, he has been featured on every “Return of the DJ” installment except the first one, he has put out DJ tools like the “Rock Breaks” and “Scratch Roulette” LP’s, he has collaborations with KRS-One, Kool G Rap, OC, Masta Ace, Big Daddy Kane, Tragedy Khadafi, Prince Po and Ill Bill to his credit, some of which can be found on the two albums he did with his production partner Dub-L, 2002’s “Ground Original – Level One” and 2004’s “Claimstake”. It’s hard to understand why JS-1 thinks it is necessary to follow up the latter at such short notice, especially with an album that can only be described as lackluster.

“Audio Technician”, his new album on Bomb Hip-Hop, is a hodgepodge of past achievements, previously unreleased tracks that sound like leftovers and a couple of highlights. For what it’s worth, the aptly titled “New Level” is one of the more interesting tracks. JS-1 lays down the first 16 of his recording career, and already he’s landing punches with “My style’s irreplaceable like Vestax parts” and dissing peers with “They use music as a fashion statement / so blatant, disrespectin’ my artform / I take a radio DJ and I stomp on him / I drop on him, blow up the Mixtape Awards / only the wack show up while I’m out on tour.” While he may not be a born rapper, he successfully translates his DJ ego to rhyme form:

“Don’t try to duplicate, I show you how it’s done, kids
you get lost in the land of 1200’s
You don’t want this, keep a low profile
you must pay dues and study my scratch style
It’s on file, I crab, flare and transform
You weak-wristed, one-handed with bad form
my hand strong, I’m Grand like Wizard Theodore
I never jam long, I leave ’em fiendin’, needin’ more”

All the more he should have provided his fans with a whole new fix. Among the previously released tracks we have “Audio Technician” with its weak MPC drums, typical DJ battle tracks like “Complicated” and “Cold Cutz”, collaborations with members of his old crew (Spinbad, Slynke, Ody-Roc) such as “Babylon 5” and “Dangerous”, and finally the concept cut “Rule #4080”. JS-1 is certainly well advised to get from behind the turntable and get into production and put his name on real songs. But “Audio Technician” is so disjointed that it makes you actually wish for an album with nothing but cutting and scratching.

There are two tracks with Rahzel on the beatbox, the solid, tag-teamin’ “Make Me Laugh” and the not particularly eventful “BX Streets”. Tonedeff and Pack FM go through the motions on “Basix”. There’s a ‘Scratchapella’ version of “Ventilation” off “Return of the DJ V”. You get a disgraceful ‘remake’ of Special Ed’s “The Mission” by Trez, who turns the classic into an utterly pointless crime story. And worst of all, you got some really sub-par production. From Eternal & React’s “In N Out” to the Five Feet Perspectives’ “Press Rewind”, the production just ain’t cutting it, being plagued by weak drums and an amateurish mix. The nostalgia of BL-One & Jak Danielz’ “Bringin Back NY Rap” doesn’t mean jack when sound- and skillwise you’re light years behind what KRS-One once called “that old New York rap.” It gets even worse with Dub-L’s “The More U Got”, which is really unbearably bad and shouldn’t have made it onto an estimated DJ’s album.

And so it’s up to members of the underground elite to save “Audio Technician” from ending up a complete disaster. C-Rayz Walz, Akrobatik, Breez Evahflowin and React give the man behind the wheel some credit on “Flying Guillotines”. None comes as spectacular as Akro and his opening line “While other DJ’s try to beef up usin’ steroids and creatine / JS-1 use the 12inch like flying guillotines,” but it’s React who probably sums up JS-1’s potential best: “Whoever said that the turntable’s not an instrument / has never seen JS-1 get into it.” It’s hard to tell by this album, but DJ highlights like “Cold Cutz” (f. DJ Spinbad and DJ Slynke) and “Rule #4080” leave more than a clue as to what the man is capable of. He just needs to turn his craft and knowledge into an appealing musical form. He may have done it before, but fails on “Audio Technician”.