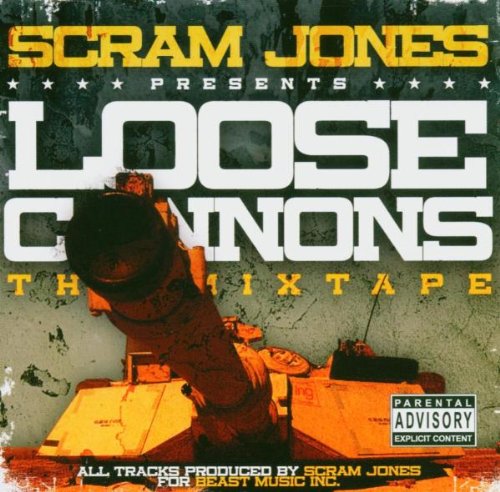 Before you let the Jones’ get you down, let me break it down for you: Jim Jones is the latest of Cam’ron’s Diplomats to have a solo out. Mike Jones could be the next Houston rapper to blow. Scram Jones finally is a New Rochelle-born hip-hop renaissance man who attacks the game from all angles. From Jae Millz’ “No No No” to Terror Squad’s “Yeah Yeah Yeah”, Scram Jones is quickly making a name for himself as a producer. But the man’s got a couple more tricks up his sleeve. He’s not only an accomplished DJ who hangs out with the X-Ecutioners and spins at NYC’s longest running weekly open mic show (End of the Weak), he’s not only done beats for Saigon (“Color Purple”) and Lloyd Banks (“Work Magic”), he’s also nice with the rhymes, a combination of talent The Source willingly acknowledged when they made him the Unsigned Hype of February 2002, concluding: “Capable of tight production, clever punchlines and killer cuts on the 1200s, Scram Jones refuses to walk that line between turntablist and master of ceremonies. He can play DJ turned producer or rapper, making him a hot commodity in today’s one-dimensional hip-hop community.”

Two years later, Scram Jones takes another step towards his own album, in hopes of joining the ranks of other one-man armies like back in the day Diamond D and more recently Kanye West. Following the “Beast Mode” mixtape series he did with Vin Tha Chin (‘We don’t play exclusives, we make exclusives’), Scram Jones serves up another mixtape filled with original production. Not quite yet the ultimate blend of Scram’s numerous talents, “Loose Cannons” presents usual mixtape suspects Saigon, Ali Vegas, Jae Millz and Jae Hood along with members of Scram’s High Society crew, with the occasional joker card coming up. It certainly starts off just right as Scram introduces himself with a collage of quotes from the past and present that hint at the fact that we’re dealing with a very knowledgeable cat here. He goes way back with fitting lines like Diamond’s “See, I write my own rhymes, produce my own shit / yeah boy, I ain’t the one to fuck with.” After letting others do the talking on the intro, Scram starts to rhyme himself, promising to bring a “little somethin’ for the streets / little somethin’ for the jeeps / little somethin’ for the freaks / little somethin’ for my peeps.”

He certainly has a little somethin’ for his immediate fam, High Society. He provides beats for Marvalous (“Oughta Know”), Jack Venom (“Killaz”) and Contraband (“Lay Down Your Gunz (Remix)”), he races double-time with Jack Venom on “Speed Demons Pt. 1” and trades multis with Marvalous on “What More Can I Say”:

“Still busy tryina get these dues paid
Cause like a man’s wig dudes is gettin’ toupÃ©d
We change a rasta, make some new trades
before a branch on your trees throws you new shade
This game gets dirtier than food trays
and half the shit that’s out there is really fugaz’
I cut you twice like I had two spades
snatch your books up and turn to a new page
Killin’ roaches, Scram’s the new Raid
Never gave a F till it became my school grade
This ain’t Elvis, my shoes ain’t blue suedes
though heads get it twisted like some new braids
One rhyme and you gettin soufflÃ©d
doin’ punchlines like I was sniffin’ Kool-Aid”

Much more noteworthy, however, is the dark track composed of a sneaky bassline, measured drums and atmospheric background noise. A similar mystery vibe is achieved on several other tracks, such as Saigon’s “Real Talk”, Sean Price’s “Remember Me” or the Jae Hood freestyle. But as a general rule, Scram Jones will use anything that comes in handy, whether it’s keyboards for “Killaz”, a Billy Joel vocal sample for “Oughta Know”, videogame blips for “64 Bit”, dramatic organs and strings for a Tragedy Khadafi freestyle, or overloaded subs for “Glass of Sizzurp” (with Jim Jones, Nore, Nature, and Cardan). He’s particularly good when he’s concentrating on the rhythm section, see Jae Millz’ “Born and Raised”, a sequence of crashing breaks topped by an anthemic flute, Nature’s “Air it Out” with its booming beats, or Saigon’s “Fuck Wit Me”, a tumbling piano/drum combo. There’s really a variety of beats on here, and for Scram Jones to apparently claim every single production credit on this mixtape is quite an achievement.

Lyrically, the whole thing is a mixed bag containing standard thug talk, punchlines and polysyllabic rhyme patterns. If taken to extremes, each one of these methods will result in one-dimensional babble. Here, that goes to a certain extent for Saigon, Papoose, Immortal Technique and Cam’ron. It’s good to come across the occasional vet (Tragedy Khadafi, Sean Price, Sadat X), who is more well rounded. While he doesn’t have a delivery that would grab you right away, as a rapper Scram Jones has the potential to appeal to different constituencies as well. There’s the usual combination of brash confidence and rhyming stamina, but he will also add a personal touch (“12 Years Ago”), he’s looking for the perfect punchline and has a larger reservoir of references than your average up-and-coming rhyme slinger. But for now it’s apparent that producing is his main trade:

“Keep it tight like a straitjacket
and if the sample tight, I’ma straight jack it
and ‘Work Magic’ so everyone can hear
how I went from ‘No No No’ to ‘Yeah Yeah Yeah’
So I don’t need to be rappin’ for me to go platinum
DJ – I need to be scratchin’… (*scratches*)”

For future projects, mixtapes or otherwise, it would be cool to hear even more scratches, to see Scram do more for the old school than letting Grandmaster Caz, Melle Mel and Kurtis Blow just do drops. Apart from that, “Loose Cannons” is an enjoyable mixtape that despite its amount of exclusives doesn’t have to scream “Exclu(e)sive!” every other minute. If you enjoy thuggish NY tapes and wanna witness a possible future heavyweight at work, you’re at the right address. If you let Scram Jones tell it, he’s already on the expressway to fame: “I make a beat on my MPC / put it on MP3 / get in my MPV / and go to MTV / and tell Carson / all I want’s the car, son / you know I got the arson.” Apparently Carson already knows, or MTV’s “Total Request Live” host wouldn’t have phoned in his first ever mixtape drop for “Loose Cannons”.