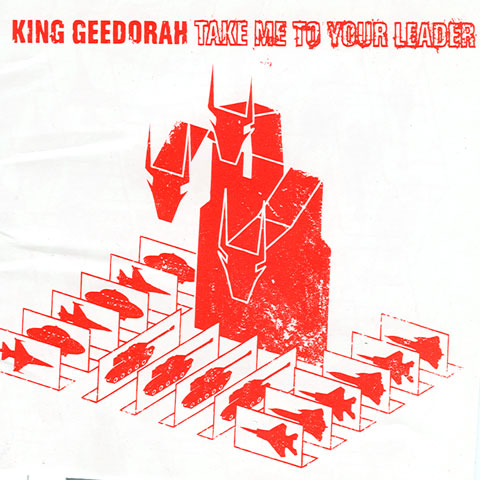 King Geedorah :: Take Me to Your Leader

One could make a compelling argument that MF Doom is the best in the world right now. Given how prolific he is, it really is astounding that he has kept his work at such a high level. Ever since 99’s “Operation: Doomsday,” he has rewritten the criterion for evaluation of an artist. Sometimes, it’s nothing tangible, just that feeling he exudes every time he picks up a mic. His first non-instrumental project after his solo debut, coming four long years after “Doomsday”, was “Take Me to Your Leader.” In retrospect, given his penchant for boasting several personalities, it is no surprise that this record was delivered under the guise of King Geedorah. Despite this odd decision, and the fact that he doesn’t appear that much on the mic, this album was just the beginning of his evolution towards the underground legend he is today.

There are two facets to Daniel Dumile as an artist. The most visible is MF the emcee. Under the name Metal Fingers, occasional guest shots, and two of his five solo albums, there’s also the talented producer. Behind the boards, the quirky soundscapes that MF crafted for “Operation: Doomsday” are what drove the album to classic status. Aside from his debut, “Take Me to Your Leader” is his other complete non-instrumental production work. It contains more musical variety than “Doomsday,” and is a snapshot of just what Doom is capable of as a producer.

Doom’s work on the boards is necessary here, because he doesn’t emerge nearly enough as a vocalist. In all, there are only a handful of songs on which he rhymes. This is more of an opportunity for his Monster Island Czars to rhyme. Things get off to a hopeful start on “Fazers,” another one of the man’s classic vocal performances:

“King Geedorah, crush on his seed’s teacher
They need to pay her better, she had nothing on the reefer
Heifer, and I had to offer her a stick of gum
She was as thick as they come, and taught a strict curriculum
Which is only good for my son
When I’m in the hood? Razor’s on tongue
Nowadays, it’s amazing raising young
Rule number one: keep your fazers on stun”

Every single line that MF Doom drops on this record is pure gold. This is all the more evident when the plethora of guests is lined up alongside him. The others aren’t bad, they just can’t even begin to touch Doom’s flow, charisma, or brilliantly conceived wordplay. This is most obvious over the alluring guitars and erratic drums of “Anti-Matter”:

Mr. Fantastic: “A hundred things on the re-up of course I’m living fat
My Mercedes outside nigga where yours at
Top down on a good day the K the I the wood way
Got cats thinking should I stay fuck what the hood say
Niggaz wanna rob me now
Bitches wanna slob me now
Hoes didn’t holla last year feel sorry now
Practice jumpshot Reggie Mil, Robert Horry now
The nigga that you with played like Atari now”

King Geedorah: “Excuse me mister, do she got a sister
Who he not to kiss her, true she do got a blister
Not a movie plot twist like a Twizzler
If I needed my meat burnt I’d go to Sizzler
Getting paid like a biker with the best crank
Sprayed like a high ranked sniper in the West Bank
Type to just blank and don’t show much pity
When I’m in the city I always keep a dutch with me”

See what I mean? Mr. Fantastic’s voice fits like a glove over Doom’s laid-back beat, but he is still dwarfed by the three-headed monster. Despite the fact that it’s a great album, “Take Me to Your Leader” frustrates the hell out of me. The production is so good that with MF Doom the emcee’s fingerprints throughout, it would have been classic. Tracks two and three are perfect examples. The electric guitar-driven “Fastlane” is a solo song for Biolante, despite the fact that it appears as the second song on MF Doom’s album. Following this is “Crazy World,” another solo joint for another rapper, Gigan, who makes matters worse by having an incredibly grating voice. That’s two out of the first three songs devoted to two considerably less talented artists.

Among the random collaborations is the incredible “Next Level.” Not surprisingly, the beauty of the track lies not in the guest emcees, but MF Doom’s sublime production. Blending an exquisite horn section with meandering pianos, he crafts an exceptionally soothing beat for his cronies to rhyme over. The song title must refer to the inspirational production, as the rappers offer nothing new. It’s tough to fault them for not earning a place alongside Doom, but all the same, his vocals would have made “Next Level” damn near perfect.

The defining moment of “Take Me to Your Leader” comes at the very end. “The Fine Print,” one of the two full length songs that only feature Doom, shows him at his absolute best. His production is clunky, awkward, but ultimately majestic. The jerky, staggering beat is punctuated by a thick trumpet, and assorted unearthly sounds (including a beatboxer) complement the track perfectly. MF sounds completely at home over the unusually spastic backdrop, and gives a lyrical performance on par with anything he’s ever done. Though there aren’t too many vocal traces of him on this release, it’s nice to hear some classic Doom before the music fades.

Rants aside, “Take Me to Your Leader” is vintage Zev Love X, MF Doom, King Geedorah, or whatever you want to call him. His production is simultaneously stimulating and gentle, a sweeping barrage of strings and horns that never gets repetitive. The guest emcees are never wack, and occasionally venture into the same league as Doom. The fact is, with the melodies provided them, they don’t need to. And, of course, whenever MF touches the mic, the world is his. This is a concept album of the highest order, and contains moments of sheer brilliance. If you’re a fan of MF Doom, this is for you. Even if you just want to venture to another world, where the beats are sicker and everything is just a little bit twisted, check this out as well. It won’t disappoint.