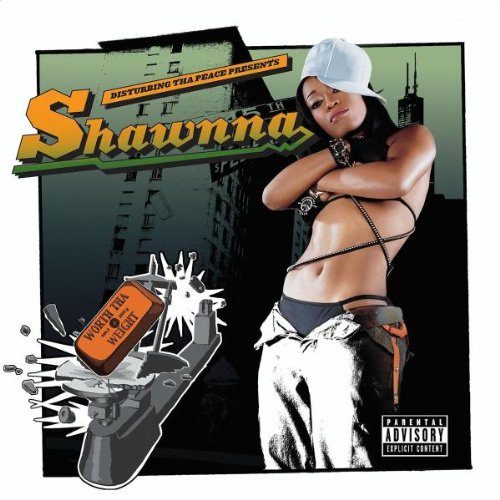 Shawnna’s not exactly a new jackstress in rap, she’s been putting it down for a minute. Even if you don’t recognize her name off hand, you’d know her as the co-star from Ludacris’ first hit single “What’s Your Fantasy,” and that was four years ago. Since then Shawnna has become the Queen Bitch of the extended family Ludacris calls D.T.P., much like Lil’ Kim was to Junior M.A.F.I.A. And not unlike Kim, Shawnna sees herself as a bigger star than that, capable of holding down a whole album and not just holding down guest verses on other people’s shit – but she’s certainly not afraid to “Shake Dat Shit” to get it:

“S-H-A to the W – double N-A, real bitch don’t play
Your eyes can’t hide what your lips won’t say
You’re acting like the Dukes of the Fifth won’t spray
It’s okay, they gon’ learn
Chi’s most wanted bitch wait yo’ turn!
Sac full of yum I’m a make that burn
Y’all can’t smoke none anyway
Wild ones, walk wit a bitch through wild slums
Trying to figure out if they’re scared of the hips or the chips
Or they really can’t talk to a bitch wit wild guns
No games, hat to the side wit low frame
Now I came in this industry killin ’em
Now they all feelin me
Sippin on Henny wit an O and a gram!”

Thanks to an infectious Timbaland beat and Ludacris returning the favor by doing Shawnna’s chorus, “Worth Tha Weight” was off to a hot start before it even hit stores. For the record, female MC’s tend to be split into two categories by most consumers these days – good looking honeydips who talk a little nasty in their raps, or baggy pants b-girls who are just as dope as any man lyrically but sadly don’t sell like it (one hopes that Jean Grae will eventually be the exception). Now that’s not to say that rap’s best female vocalists aren’t sexy, or that rap’s sexiest female vocalists can’t spit hot shit, but a music industry predicated on using gimmicks to get anything over they consider “chancy” long ago decided that for women to rap and appeal to men, they get further pushing sex than syllables. It’s been a constant struggle for dope MC’s like Lyte and Latifah to prove they’re all that without getting hoochified, only made harder when “nasty bitches” sell millions. To be fair some of hip-hop’s dirtiest divas really DO get their freak on and not just as a marketing gimmick. After all Willie D said let a ho be a ho right?

So hate me now for calling it like I see it, but Shawnna is definitely out to do the ho stroll on “Worth Tha Weight.” When she’s not selling sex, she’s doing her best to thug up the tracks. And that’s not all bad, since she does put a little bit feminine empowerment in the lyrics. On “Let’s Go” she boldly challenges men to oral stimulation over a Just Blaze beat: “Believe me, shorty won’t know can he freak me/shorty won’t know ’til he eat me.” You’ve already heard “R.P.M.” featuring Twista and Ludacris on the D.T.P. album, but it’s nice to hear Shawnna spit that hard and fast on a track and be able to hang with the big dawgs. The clubs are gonna love Jermaine Dupri’s beat and Shawnna’s Kim-esque style on “U Crazy.” She even proves capable of scaring the shit out of lesser artists on “My Chicago (Part 2)”:

“It’s rarely I ever need introductions
Cock back the hammer and ram in ya function
Timberlands get stomped and I’m sayin shit is nothin
I ain’t gotta be bluffin
Your man I’ll be dumpin, dead at your pumpkin
Bitches wanna get a piece of me in the booth
Well I’ma show these chickens the meanin of bein the truth
And now my niggaz got you spooked and almost peed in your boots
And now your pockets gettin loose and I’m a G with the juice”

The most surprising track on the first half of the album may be her duet with Missy Elliott over a Kanye West beat entitled “What Can I Do” – it’s hot enough to be considered as a future single. She thugs it out with Noreaga on the “Posted (Remix),” tries to get some R&B R. Kelly style crossover on “So Real So Right” (an unabashedly sextastic track), actually does a decent update of MC Lyte on “Kick This One” and then go for some sexy soul over Terrace Martin’s saxophone samples on “Super Freak.” As the album winds down, Icedrake does a dead-on impression of Timbaland’s style on “Turn it Up” while Kardinal Offishall drops in to give the album some patois flavor on the “Block Reincarnated (Remix).” This is followed by “Cami’s Solo” (must be Shawnna’s daughter) and a bonus track – the “Dude” remix featuring Beenie Man and Ms. Thing. At eighteen tracks and nearly 60 minutes long, you’re not left with the impression Shawnna said anything really profound, but she did say it in an enjoyable way over an impressive selection of beats. Shawnna does indeed in the end turn out to be “Worth Tha Weight.”