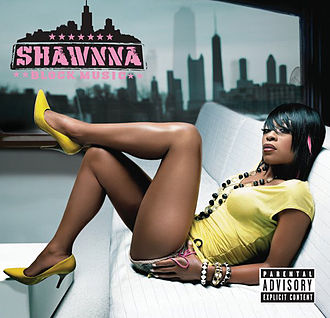 Proud to shake that thang and pop that P, Shawnna’s shameless sexuality certainly hasn’t hurt her in record sales or career advancement. In fact it’s fair to say that out of all the Disturbing Tha Peace members to go solo with an album she’s been the most successful. By no means was “Worth the Weight” a lyrical masterpiece, but it was full of enough good beats and raunchy raps to get over anyway. Shawnna was already one strike down before “Block Music” was even released though due to “Gettin’ Some” having one of the shittiest beats I’ve ever heard. I realize this was a top 10 hit everywhere but I just can’t fathom why – Xcel’s track is monotonous, lacking melody and built on some of the weakest-ass bass beats ever heard – and that’s being NICE. I couldn’t stand this song on DTP’s “Ludacris Presents,” was not happy to see it released as a single, and was even more dismayed to see that the “Remix” didn’t change the track at all other than adding more vocalists.

“Block Music” doesn’t start out as being any more promising. Normally I dig a Carl ‘Chucky’ Thompson beat but his track for “Can’t Do it Like Me” sounds like a flimsy attempt to do Southern style bounce. Not many things in this world automatically scream to me “I’d rather be hearing Tear Da Club Up Thugs” instead but this one instantly brought to mind “Push ‘Em Off.” The lyrics might be weaker but the beat isTEN THOUSAND times better – DJ Paul and Juicy J know their shit. Somebody should also explain to Shawnna that it’s not a good idea to come off sounding like a clone of Da Brat when you’re both from Chi-Town – after all homegirl was not afraid to threaten Sean Waltman with a champagne bottle so I suspect if she keeps it up Shawnna might get cut. Vudu may have done a great beat for Field Mob & Ludacris on “Georgia” but the thrill is gone on this album’s title track and Shawnna’s rap does nothing to impress either:

“Chevy doors open, beats bangin out
Flame smokin that thang and my chain blingin out
Cell phone ringin, I ain’t pickin up
I’m gettin drunk with my bitches and I don’t give a fuck
We drinkin Absolut, with pineapple juice
They passin out by the minute, but I ain’t halfway through
We smokin plenty weed, I’m talkin heavy ‘dro
Not that domestic my nigga we buyin me-xi-co”

Okay I hear y’all saying it and I agree – nobody expects Shawnna to be a profound lyricist. Even if we set the bar lower just for her though she still fails to reach it, simply because in the first eight lines she’s already recycled every major gangster rap cliche there is – being drunk, smoking marijuana, and wearing a big flossed out chain. I suspect if I listened to the rest of this song she’d talk about having a gold or platinum grill, buying out the bar, shooting a bitch for starting some shit over a man, and fleeing the scene in a fast and expensive automobile. Frankly I can’t be bothered to find out though because this song sucks ass and I’m not listening to the rest of it. I find myself having that same reaction to most of the songs on “Block Music,” with only the occasional track breaking through for the beats. B-Crucial actually makes her sound like Trina on “Damn” and that’s definitely a step up, and a guest appearance by Smoke of the Field Mob doesn’t hurt. Vudu comes a little tighter on “Candy Coated” but this one is helped much more by 8 Ball & MJG giving the otherwise tired subject matter some personality and style. G-Ball gets a little OutKast on production for “Can’t Break Me” but Shawnna’s rapping already left me broken. The hardest bass beats may be on Staybent & Salaam Remi’s “Lil Daddy What’s Good” but this song screams Paul Wall cameo and none is to be found.