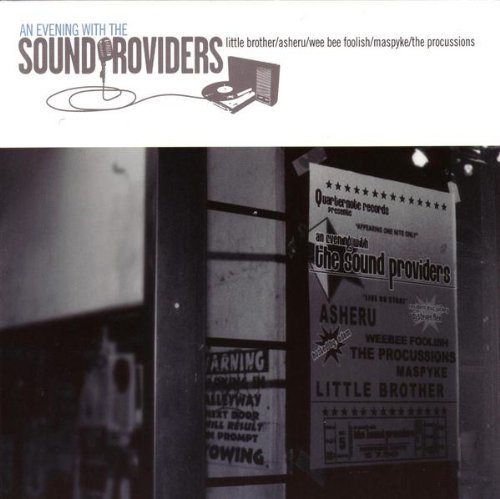 Hip-hop fans listen up: before Nasty Nas, there was a musical phenomenon by the name of Miles Davis. Before Jigga Jay-Z, there was a legendary trumpeter men dared to call John Coltrane. Before 50 Cent, Lloyd Banks, and Youngbuck, there was Charlie Parker, Sonny Rollins, and Thelonius Monk. But of course, you already know all of this. If you’ve listened to at least one hip-hop song in your life, chances are you’ve heard the influence of these great jazz musicians, even if you haven’t come to realize it yet.

From DJ Premier, to Ali Shaheed Muhammad, to the Beatnuts — hip-hop producers have faithfully paid homage to their jazz predecessors in the form of sampling. With Madlib recently invading the Blue Note archive on Shades Of Blue and El-P composing his experimental concoction High Water: Mark, it seems hip-hop is rekindling its long lost appreciation for jazz music.

Alongside these producers, California’s own Sound Providers have been long heralded as beatmaker extraordinaires for their ability to convert yesterday’s long-forgotten jazz vinyl into today’s head-nodding hip-hop. On their official debut, An Evening With The Sound Providers, the producing duo jam with the laidback groove of a local jazz nightclub. And as the two-man group dig deep into the crates for that bebop pub sound, they bring a few MC’s along with them to liven up the show.

Unspoken Heard’s Asheru stops by on “For Old Time’s Sake,” and he expresses his admiration for hip-hop music over a set of jubilant xylophones. Meanwhile the Procussions do their thing over the Dixieland guitar strums of “5 Minutes,” and Maspyke contemplate life on the brilliantly piano-chopped “The Throwback.” But it’s Little Brother’s cameo that makes the best impression on the groovy “Braggin & Boastin.” As a romantic bass guitar plucks away, Phonte and Big Pooh send a warning to all would-be rappers â€“ be careful what you wish for:

“Another day up in these labels of rap
And you’re a battle MC, who swears that your style is fragrantly fat
Can’t wait to hit the studio, disabling tracks
So everyone could hear your shit on turntables and DAT’s
You put your single out, so now you’re laying it back
‘Cause everybody’s screaming, “Yo son, your name’s on the map!”
…
But prior to all the props and the street buzz
Nobody in your neighborhood could give a fuck who you was
Because they don’t love you, they love what you stand for
The car you drive and the loot you got your hands on
That shit could end in a minute, any minute
And your driveway won’t have all them Bentleys in it”

Aside from a short roster of guest MC’s, An Evening With The Sound Providers is comprised mainly of jazz-fused instrumentals, and that’s where the SP’s stand out. On “Night Steps,” a thick bass cello wavers in-and-out, while tropical xylophones chime on the soft “Pacific Vibrations.” The samples used are so authentic that if paid proper attention, the rustling snap-crackle-and-pop of vintage vinyl can be heard in the backdrop.

But the question immediately rises: why, oh why didn’t the Sound Providers throw some MC’s over these ill beats? I could almost envision a dope J-Live verse over the tickling ebony-and-ivory keys of “Autumns Evening Breeze,” or perhaps a brief Capital D cameo on the contagious lo-fi bops of “Only Moments Ago.” Instead what you get are hollow jazz samples that while enjoyable on the first listen, quickly become repetitive two minutes into the track. I suppose MC’s will have fun using these grooved out instrumentals as freestyle fodder, but jazz purists (such as myself) will be anxiously waiting for a tangential drum roll, or perhaps a spontaneous piano solo, or even a slight moment of improvisation. But to no avail. Looped jazz samples are all you’re getting, buddy.

But don’t get me wrong, An Evening With The Sound Providers has its fair share of instrumental gems, like the Ahmad Jamal-esque piano melody on “Jazz at the Cove.” However, it lacks the spontaneity and liveliness of an original jazz cut, and I’d personally much rather listen to a 1970 Jamal original than an infinitely looped remake â€“ especially when it’s devoid of any lyrics to relate to.

Sound Providers have always been known for getting their fingers dusty when it comes to sampling jazz compositions, but while they are renowned experts at splicing classic jazz shards with modern boom-bap percussions, without an MC to stand as the figurative cherry on the top, those same beats leave a bland aftertaste when served on their own. The few tracks that have MC cameos will probably get regular rotation on my stereo, but the straight instrumentals â€“ although nicely orchestrated â€“ won’t get as much attention after a few spins.