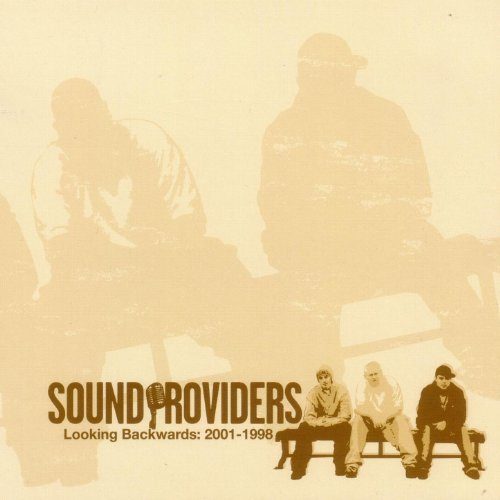 Looking backwards to a couple years ago, contributor Kenny Rodriguez did a nice write-up on the Sound Providers debut album “An Evening with the Sound Providers.” For those who want to skip ahead with this review and not look back I’ll summarize briefly: Mr. Rodriguez was feeling the Providers on the beat tip, but wished that they had come correct with more guest MC’s and better lyrics overall. It was a good enough album to make a dent on some playlists, but it’s telling that none of the RapReviews staff placed it on their “best of” lists for The Year 2004 in Review. In short, nice first try for the SP’s, but come back tighter the next time to get more props.

Oddly enough instead of moving forward in 2006, the California beat maestros have taken a step in reverse to release “Looking Backwards: 1998-2001.” This release on ABB Records is a collection of all their singles before ABB put out their first album. HANHH?! You read that right. It’s hard to know how to interpret that move. Either ABB likes the Sound Providers so much they decided to release a nice compilation package, or the Sound Providers have done so little for their label of late that they were forced to go this route to put out a new release. That’s not to say it’s a bad idea either way. The SP’s had some pretty fly singles in the early days of their career. It dates back to when the rapper Profile was part of their crew, before he pursued a solo career. That doesn’t seem to have worked out too well for him since he doesn’t have any albums listed on AllMusic, but on the track “No Time” he spit to some smooth grooves with a style that would blend perfectly into Styles of Beyond. Peep the verbals:

“To the top of the game, with the mic in my hand
What more could you expect from the three man band
Underrated? Nah never, my crew is too clever
Foundation is layed, now it’s time for me to sever
the weak links, it’s a thinkin man’s game
You should have thought about that, before you ruined your name
And took the easy way out, no doubt you felt the pressure
Never thought you would be, top billin in my lecture
You know who you are, so take a seat with the rest
You’re through, we suggest you put an F on your chest”

This project also expands beyond compiling together their early tracks to include some promos and radio drops that are probably seldom heard outside die-hard Sound Providers fan. The “7L Promo” threw me at first because I expected to hear Esoteric rapping instead of Profile, but the track’s still pretty damn fat. There’s also promos for J. Rocc and Mr. Choc of the Beat Junkies among others. Getting back to the main tracks though, it’s hard to understate how smooth Profile sounds flowing to the carefully selected light jazz that Jason Skills and Soulo provide on “The Field.” It’s safe to say Profile may be the artist Kenny Rodriguez was looking for in his review, the missing element who would have made things complete. Once again, check the linguistics:

“Radiant thoughts illuminate for the blind
A student of my culture translatin through rhyme
Educated by time, so check my verbal design
Interject visuals through the use of the mind
It’s all about the money nowadays so what’s the use
The only fortune I hold, are the gems that I produce
The solution is what, but if you don’t make the cut
You’ll be the last in line once the door get shut
The next chapter, page one the conscious rapper
Not in it for fame, so respect is what I’m after
Don’t have to wave a gun to help generate funds
So record execs can start throwin me crumbs”

While the album is a bit scattershot owing to the fact the Sound Providers were not the most prolific of artists, it’s hard to ignore how easily listenable and fresh sounding tracks like the swinging piano bounce “Yes Y’all” or the acoustic guitar riff laced “That’s It” are. “Looking Backwards: 1998-2001” may not be the top album on your “must cop” list, but it’s possible this re-release of older material might just make a stronger impression than their last new album did. Give the Sound Providers a chance and the only thing you’ll regret is that they can’t reunite with Profile to drop some more jams.