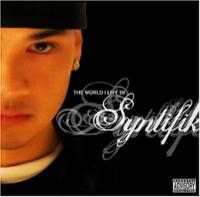 Syntifik :: The World I Live In

It’s a cold world out there. No matter who you are, or where you’re from — we all got a story to tell, and it usually doesn’t have a happy ending. But with struggle comes dreams of a better day, and Canandian-bred rapper Syntifik treads on the thin line between the two. Hailing from Vaughn on the outskirts of Toronto, his album The World I Live In is a vision of the world through the eyes of a poetic MC trying to get his.

Accompanied by impressive production, Syntifik can be found lamenting at the world’s woes, rummaging through past troubles, while at the same time daydreaming of finally making it to the top. Over the sparkling chords of “Got To Survive,” the somber MC takes time to outline his regretful past and hopeful future:

“I was born in this filth, a product of my environment
I’m tryna be rich and eat good before expiring
Stack chips and focus on early retirement
Determination’s in my eyes, no denying it
I got the heart of a pimp and the mind of a scientist
It’s only right that my people is gonna kick it up
I gotta get dough but stick to my principles
Life is too short to live broke and die miserable
Spending money is the routine, you could tell the way the jewels gleam
Truth is, I’m about to be the new king”

A melancholy grand piano knells along on “For My Fam” as Syntifik pays homage to his comrades (“You helped me out when I was falling fast / So for my fam, I’ma bend over backwards and crawl over broken glass”), and later on the melodic synths of “Choose Carefully,” the MC reciprocates love to his loved ones and the opposite toward everyone else. The reflective “Sparkling Diamonds” carries a catchy high-speed sample and thick bassline, and even the â€˜80s montage-esque “Let Me Live” thumps with a rolling guitar riff.

With generic song titles like “Let Me Live,” “Got To Survive,” and “Only The Real,” it’s evident that the album’s topics are nothing new. However, Syntifik’s calm but affective flow expresses a solemn sense of pain, but without the annoying clichÃ©s and pretension of, say, a Ja Rule or a DMX. Speaking like a scholar immersed in a man-to-man conversation, Syntifik illustrates a story that the average, down-to-earth person can relate to and sympathize with.

The MC’s prose is further accentuated by the philharmonic instrumentals throughout the LP. Sounding like half-studio equipment, half-orchestral pit, The World I Live In is packed with backdrops poignant enough to keep heads nodding, but low-key as to not over-shine the man on the mic. So while Syntifik’s flow is nice in its own right, the album’s talented production team also deserve a hearty pat on the back.

At the end of the day, Syntifik won’t hit listeners with witty one-liners, catchy hooks, or singsong lyrics. But what he does bring is a solid flow, reflective lyrics, and a sneak-peek into the mind of a young man struggling with the grim world he lives in. Keep an eye out for this cat.

Syntifik :: The World I Live In
8Overall Score
Music8
Lyrics8