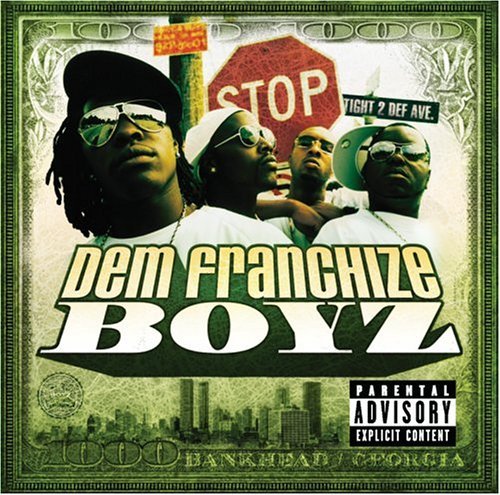 Here’s the straight up truth right up front – there’s not much chance this reviewer is going to like this album. Some writers would pretend they’re going to be fair and impartial, and still trash this self-titled release by Dem Franchize Boyz. Fuck the bullshit. I didn’t like Dem Franchize Boyz from the first time I heard “White Tee.” I’ve seen some questionable songs go straight to the top of the charts in the past. Khia’s “My Neck, My Back.” Hitman Sammy Sam’s “Step Daddy.” For their faults though, namely a lack of well written lyrics that aren’t memorable for more than five minutes, at least those songs could be said to be silly and mostly harmless. “White Tee” has no such redeeming qualities, and seems to have become a hit just to spite not only my lifelong relationship with hip-hop, but my affection for Southern rap records in particular.

At twelve tracks and 54 minutes long, “Dem Franchize Boyz” is basically the “White Tee” concept extended ad nauseum – heavy emphasis on nauseous. If you’re not already familiar with their one hit, Dem Franchize Boyz specialize in saying the same thing over and over again until long past when you’d gotten the fucking point. You can make your own version of “White Tee” just by adding the phrase to the end of any rap line. Just pick some words at random – it’s not that hard: “Def in my white tee, Hugh Hef’ in my white tee, fuck a Playboy bunny to the left in my white tee.” Get it? Now with that level of adiposity, you’d expect the first track “Where I’m From” to be as lyrically large as Warren Sapp is husky. That’s not fair to Warren Sapp though, because he’s quite agile for a man of his girth, while this song is grotesque in it’s corpulence:

Now admittedly I overdid it with the “fat” synonyms, but that just goes to show that these ‘Boyz’ have probably never picked up a dictionary let alone gotten beyond the fourth grade level in school. Loquaciousness is not a requirement to being a great MC, because artists like Missy Elliott are sometimes accused of being similarly remiss yet still create dope albums. How do they do it? Breath control, charisma, and great beats among other things. Act like Nadia Comaneci though and flip this – on her worst day the above MC is ten times better lyrically than anybody in the D.F.B., who ought to have their raps impounded by the DMV for rhyming without a license while AWOL (Absent Without Obvious Lyrics). Does this album get any smarter after the opener?HELL NO. Track two is called “Fight.” Guess what? The first twenty-four seconds are them saying the word “fight” over and over again. Impressive. Apparently their most redeeming skill is being able to hit you in the head so hard that they get “to the white meat.” I’m sure Evander Holyfield, Lennox Lewis, and Roy Jones Jr. are shaking in their boots.

It just goes on and on like this. “When Can We Date” is about as close as they get to lyricism, although every line for bar after bar in the first verse ends with “eee” sounds, and the chorus is even thicker with “ayyy” sounds – is the Fonz on this record? I do like the piano backdrop and bassline of “Dat’s Da Way Dey Roll,” but dat’s about too damn many phonetic ebonic spellings in the title alone. “Do Ya Dance Girl” makes my ears hurt just from the way they say their “earls” in “girl” – even Nelly is not that country; or at least has more flair and style if he is. They attempt to make up for this with something vaguely tropical for a beat, but sipping a drink out of a coconut won’t make you any more of an islander than this whack track. What’s their mind-blowing lyrical concept for the next song? “Bitch Nigga.” Wow, that’s astounding. Astoundingly stupid. D.F.B. has the audacity to call one of their songs “Oh I Think Dey Like Me.” Here’s a tip – nobody with more than five working brain cells SHOULD like Dem Franchize Boyz. Did I offend some of their fanbase by saying that? WHAT fanbase? Oh that’s right, the same people who put “White Tee” at or near the top of the charts. This song is a plague on hip-hop (there’s already a hundred parodies of it) and D.F.B. fans are a plaque on Southern rap. At a time when even the crunkest of rappers are making surprisingly profound songs, these ‘Boyz’ have proven even stupidity can be taken to a whole new level.