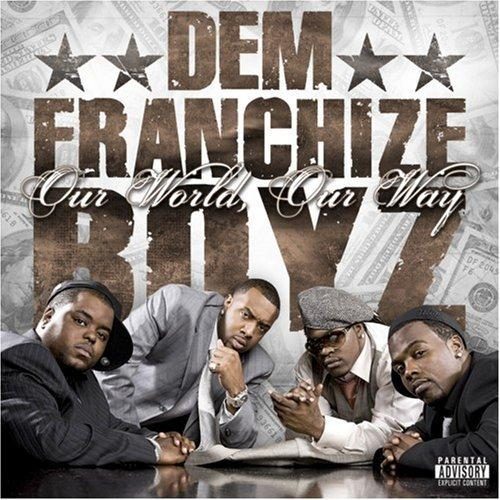 One is at time forced to give credit where it’s due to those who have succeeded despite all your reservations and expectations. My expectations early in the career of Dem Franchize Boyz were so low they could be categorized as a whole new kind of “underground.” Theirself-titled debut convinced me that six feet just wasn’t deep enough to bury the raps of this crew, and fellow writer DJ Complejo was not much more impressed by their followup album “On Top of the Game.” You can argue with these reviews, but neither of us can argue with the facts, and the fact is that DFB have moved over EIGHT HUNDRED THOUSAND UNITS since 2004. Numbers don’t lie – Dem Franchize Boyz have not only found an audience for their style of hip-hop music but have expanded it greatly since making their major label debut. Thanks to songs like “White Tee” and “Lean Wit It, Rock Wit It” the Boyz have found their catchphrases becoming part of the hip-hop lexicon and their style becoming part of the pop culture lexicon. Oh, I think it’s safe to say, the people like Dem.

2008 sees the group return on a new label (Koch Records) with a new album titled “Our World, Our Way.” There’s no doubt DFB are doing it their own way, no matter what the critics or the feminists might say, when listening to a song like “Mr. Feel Good.” Hip-Hop has at times had a problem with treating women like second class, but these men show just what kind of Boyz they are with casually dismissive lyrics about bitches and hoes that aren’t even clever or funny. If one must give them credit for being successful artists, one must also give them credit for distributing vile misogynistic attitudes as though they’re a natural extension of being male without the slightest hint of the repercussions that attitude can have:

“The kid say nice things, spit what they wanna hear
Slick conversation have a bitch smilin in her ear
First class flights put her mind on another level
A bitch ’round town wishin that her man knew better
I waste a couple stacks to make a bitch feel important
But when I get them drawers, it’s a different subject
I play the game raw, let my homeboys hit the bitch
Find ’em, fuck ’em, beat ’em then forget the bitch!”

Even as a jaded twenty-five year veteran of listening to hip-hop records, it seems to me like DFB are taking objectification of women to wholly unseen levels. Even on a song like EPMD’s “Gold Digger” it was implied that a woman was at least a worthy adversary, and that you had to use your intellect to foil their crafty schemes. No intelligence is implied here – these Boyz find women to have no thoughts in their head whatsoever. In the DFB universe a “bitch” just stands around waiting to be made to “feel important” by the interest of someone with money, who can then use her sex and toss her around like a football at will to the whole team, until they tire of the conquest and throw her on a rubbish pile. I’d like to tell you that anything for the 13 songs of “Our World, Our Way” manages to be more profound than this. I’d also like to tell you that I had the kind of money DFB does – I’d never have to worry another day in my life. Wealth and status gives Dem Franchize Boyz a sense of entitlement to everything in the world and everyone in it. Perhaps you can relate to that if you’re as successful as they are, or perhaps you aspire to be as wealthy and vapid as they are and find inspiration in their morally bankrupt raps. Follow their example and you too can “Get Cha Hustle On” as long as you don’t start “Talkin’ Out Da Side of Ya Neck” and get smoked for daring to breathe the same air as DFB.

Back to giving Dem Franchize Boyz credit though, which is still something I am reluctant (even loathe) to do. There are some definite crossover hits on “Our World, Our Way” which you will be hearing at the club or on the radio if you’re not already. The LT Moe produced “Turn Heads” almost manages to disguise how little DFB really have to say, thanks to a catchy beat and the crooning of R&B sensation Lloyd. ALMOST. Within the first minute of the song DFB brag about “running with two hoes” and claim that their “girlfriend got a girlfriend.” I wonder if Katy Perry would be jealous. At least every now and then they can pick from one of two and decide on a “#1 Girl,” a Vaushaun Brooks produced track that could sneak its way into a quiet storm mix on urban radio without disrupting the flow. “The Life” featuring City Black is pretty slick too. In fact a lot of the songs on “Our World, Our Way” are well produced, but that doesn’t necessarily make them easier to stomach given DFB put the “ass” in “crass” in a way few other rap groups could (or should). The bottom line here is that I expect for Dem Franchize Boyz to sell another 800K units with this album. That doesn’t mean I can recommend it, but it does mean that I can see why they are popular. Rappers have often argued that if a woman is not a bitch, she shouldn’t be offended by the word. The question is at what point is it offensive just at face value whether any woman is upset by it or not – shouldn’t there be a higher level of discourse between men and women in the world than this? There’s not in “Our World” but I hope in YOUR world there’s more than just bitches who ain’t shit but hoes and tricks.