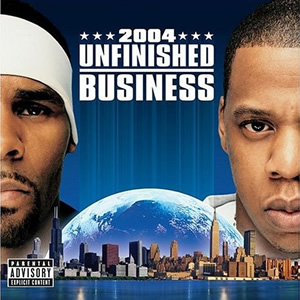 My, my, my, my; there sure are a lot of fingers in the pie, pie, pie, pie. Jive, Rock Land, Roc-A-Fella and Def Jam. Why don’t we cram a few more hands in there as well? What about the Island Def Jam Music Group, which is the parent company of both Def Jam and Roc-A-Fella? Let’s not forget the Universal Music & Video Distribution Corporation. Actually who COULD forget Universal? They are the top dog alpha male out of the whole group, with the whole of the Island Def Jam company swallowed up within their massive maw. And you thought Def Jam was still the label built by Rick Rubin and Russell Simmons? Hell no, that vanished a long time ago. Look at it this way – any time you pick up a CD in the store any more and it has one of those huge ugly “FBI ANTI-PIRACY WARNING” blocks on the back, it’s probably part of the Universal monopoly whether you see Universal Records on the back of it or not. Confused yet? I know I am. But it’s amazing the amount of shit that falls under their thumb. Geffen? Check. A&M Records? Check. Interscope? Check. Actually the latter three aren’t even considered seperate entities on Universal’s corporate list, they’re all lumped into one site. Consolidation people. Like any form of mass media, from newsprint to radio to television to the internet, it’s all about consolidation.

Perhaps the real “Unfinished Business” of this album, besides the fact they ought to pay EPMD royalties for the name, is that it’s not enough for Universal to own every form of record label on the planet. Their plan is to consolidate all FORMS of music as well. Why bother having R. Kelly make an R&B record of his own, or Shawn Carter release a rap album of his own, when you can squeeze the two into one. If one alone is great, then two together must be like peanut butter and chocolate. There you have it, Jigga and Kels are the official “Reese’s Peanut Butter Cups” of the music world. The funny thing is, I don’t like Reese’s. Never have. Ever since the first time someone gave me a candy-coated shell I mistakenly thought was an M&M as a kid (probably someone who watched “E.T.” too many times – and I’m sure Universal will soon own that too), I’ve hated everything to do with Reese’s ORcombining chocolate and peanut butter. Both flavors are great, thank you, but I’d rather savor them seperately. Perhaps that’s why I wasn’t too keen on R. Kelly and Jay-Z the last time they tried this trick, calling it “The Best of Both Worlds.” To me it was anything but the best. While on a one-off basis it was reasonably successful to put Jay-Z on an R. Kelly remix or vice versa, a whole album of the two seemed to unnecessarily hamper what made both great. The harder they tried to combine, the more it failed. Jigga had to change up his style to fit in with R. Kelly’s crooning, while R. Kelly tried to thug it up more to appeal to Jay-Z’s audience. Big mistake. And yet here they are at it again on “Big Chips”:

R. Kelly: “You know them boys got the clubs out of control
Nigga what ya heard it’s Kels and Hov
With the second comin of ‘Best of Both’
In the first week I predict a million sold, we talkin BIG CHIPS!”

Jay-Z: “I on the other hand relish the situation
Thank the Lord for the gift, I’m gracious
I went overboard, look at this big bracelet
I overhauled it you wouldn’t recognize it
From the time that I bought it I just replaced it
I risk cases for shit like this, nigga I pray for some shit like this
Word to my Uncle Ray, who gave us life for some shit like this
Ma you rollin I’m as real as it gets”

Is it destined to be a huge hit? Oh of course. Even if R. Kelly and Jay-Z weren’t already superstars in their own right, they’ve got the combined weight of the largest musical empire legally possible to shove this record down the mainstream’s throat. You’re going to be seeing “Big Chips” on every music video channel, hearing the song on every radio station, seeing them on every talk show, and so on. To be fair there are some good songs on “Unfinished Business.” I like the floating flutes that Tone & Poke produced for “She’s Coming Home With Me,” and Jigga’s macking is not lacking. “Feelin’ You in Stereo” is an R. Kelly produced song and concept that works, avoiding the corniness of “Half on a Baby” while retaining it’s smooth musical qualities. “Mo’ Money” is more or less a remix of “Get This Money,” but it works thanks to Twista’s fire fast flow on the 2004 update. And who can be mad at the bonus remix of “Return” that includes Slick Rick and Doug E. Fresh? That’s SO appreciated, and I think Hova is the one personally responsible for making it happen. Thanks Shawn, you da man!

While “Unfinished Business” proves that R. Kelly and Jay-Z could refine the formula from last time and actually make it a little more cohesive, it’s largely due to a better selection of beats and guests. Did I forget to mention Foxy Brown and Memphis Bleek each appear on a cut? Yes I did, my bad. The end result is that this time R. Kelly’s peanut butter R&B is actually de-emphasized a little in favor of Jay-Z’s hip-hop chocolate. That’s fine by me, because it tastes better that way. Not as good as an unrestrained and unfettered Jay-Z does by himself mind you, but it’s an improvement. So whether you give the credit to Jive, Def Jam, Roc-A-Fella, Rock Land, Universal, or whatever mega-monolithic corporation all of the above will turn into next, “Unfinished Business” is a relatively tolerable release. That’s good considering that the combined forces will be ensuring that we hear it over and over again for the next 6-8 months, whether we want to or not.