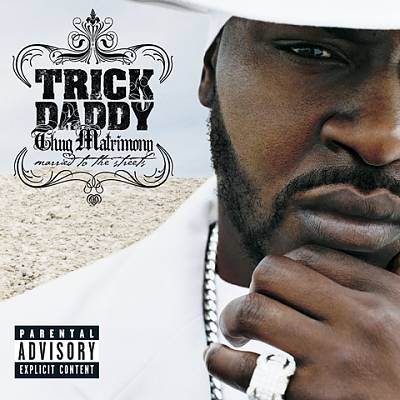 Trick Daddy’s done a lot of things in the 21st century. He’s written a “Book of Thugs.” He advocated for his homies with the words “Thugs Are Us.” After so much success, what else could you do but go on a “Thug Holiday?” And it seems that after all this time, there’s only one thing left for the man who put “Thug.com” on the map way before most people even had a dial-up – get married to the game. So shine up your best pimpmobile, put on your Sunday clothes, polish those shoes and come to the wedding. Trick celebrates his union in an unholy ceremony on wax called “Thug Matrimony.”

The thing that probably seems sacrilegious to rap and rock music fans alike is this album’s first single “Let’s Go.” Imagine this heady cocktail being poured together – Ozzy Osbourne’s “Crazy Train,” Twista, and T Double-D all on one track. If that weren’t enough, Lil Jon does the chorus. WHAT?! OKAYYYY! It’s funny though – everything that makes this wrong is everything that makes it right too. It’s not even unprecedented. Rappers have been lifting Black Sabbath samples for decades, KRS-One turned AC/DC into a “Dope Beat,” and Run-D.M.C. were jamming with guitars long before Aerosmith got in the mix. So if you’re still trying to get over the mental image of Ozzy Osbourne jamming with hip-hop, it’s not the song that’s wrong. Feel me? If not, feel Twista:

“Gotta spit for the murderers, and the killers, and the thugsters
That be fuckin up the ballers, and the dealers, and the hustlers
Got me comin at you bogus in the V.I. while they bumpin Lil Jon
I’m a brush ya
It’s the psycho nigga Twista from Chicago rollin with the Miami nigga
That’ll crush ya”

“I ain’t that rappin type awright, and I that actin type awright?
Being soft ain’t in my script; I’m a playa an’ you – you just a square
See, once that Hennessy into me, the whole industry is my enemy
If you ain’t no kin to me or friend to me – bitch, don’t pretend to be (WHAT?)
See I’m strictly for the thugs, I’m for the street and straight out the hood
My, M.O. is ghetto, and I got a deeper gat for you wheezy cats
I’m straight out the county of Dade, playa on fire, nigga M.I.A.
You ever go South of the border, Thug’s most wanted, you gon’ get slaughtered”

Trick is a thug with no apologies for his lyrics or his music, and that tends to work out fine. As long as the music’s tight, you’ll be feeling Trick, and “Thug Matrimony” features some of his best. Chronic Chris gives fat horns and dirty funk to “Gangsta Livin’,” smooth reminiscing grooves to “These Are the Daze,” and he ain’t “Fuckin’ Around” on a high energy track featuring T.I. among others. Gorilla Tek proves Trick Daddy really IS fo’ da kids on “The Children’s Song,” gets freaky deaky on “Menage a Trois” featuring a selection of S-N-S all-stars. There are some one shot producers throwing hot songs in this bitch too. Eddie Scoresazy samples some old soul for the motivational “I Wanna Sang.” “I Cry” featuring Ron Isley may be the most soulful thing Scott Storch OR Trick Daddy has ever done, f’real. Happy Perez has some straight Texas lowrider funk on “Ain’t a Thug.” Jazze Pha even gets down on both sides of “4 Eva,” blessing the boards on one and singing the hook on the other.

Given he’s had from the 90’s through to today to perfect his craft, it’s no surprise that by this point in his career Trick’s found the perfect balance. He can create thugged out joints for the homies that want to get crunk in the club, smooth ballad tracks to please the women, and positivity to counter the critics who say thuggin’ is negative; all while not offending either of the other two at the same time. It’s an incredible balancing act, but for those in the know it’s not really that surprising given Trick was putting Miami on the map well before Will Smith decided to make a song and a music video. Some people are still stuck on the idea the Southeast is all Luke Skywalker and DJ Magic Mike, and don’t get me wrong cause I’m not knocking either one (those old school joints got hella bump to ’em), but Florida’s hip-hop has definitely evolved. Even though Trick might be getting married to the game, that doesn’t mean he’s gon’ settle down and let it pass him be. “Thug Matrimony” proves Trick is still relevant in 2004, and for a long time to come.