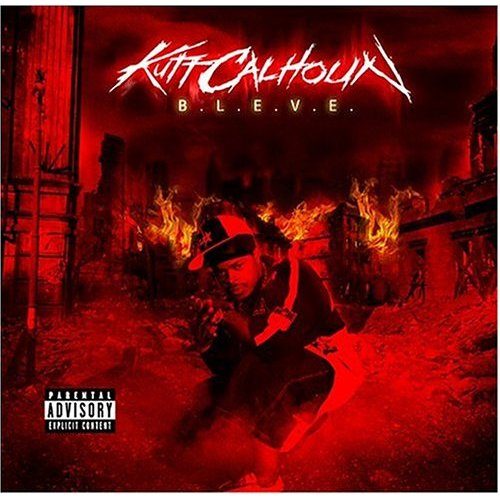 First things first – Kutt Calhoun is not related to Slimm Cutta Calhoun or any of the other Calhouns already in hip-hop. Calhoun is his real last name though, just like it was for the wrestler ‘Haystacks’ Calhoun. In the other cases of Calhouns in hip-hop it’s just an attempt to catch on, like wrestlers who name themselves “Anderson” in the hopes that someone will mistake them for being related to Ole or Arn Anderson. Ironically neither one were born Anderson themselves – Ole started the trend when a promoter made him the “brother” of the real life Gene Anderson; but I digress. This album literally dropped in my face straight out of nowhere. I didn’t receive any press release about it. No ads in the Sunday paper said this one would be out at retail on Tuesday the Xth. I didn’t see anybody pushing the album online. Kutt may be as big as Tech N9ne within his native Kansas City, but Nina gets exposure outside those confines nationally while Kutt doesn’t – at least until now.

Having taken a chance and dropped $13.99 on this disc with no forewarning one way or the other about rap’s latest Calhoun, I was hoping for good results. Good news – if you take the same chance on Kutt Calhoun, you may be pleasantly surprised. Several producers make a name for themselves by above average beats. Lil R’s work includes the pounding “Bring the Flame,” the West coast synth funk of “Keep it Keeblur,” and the Carribean sound of “Goldberg.” Don’t get it twisted from paragraph one because this has nothing to do with grappling; it’s all about macking chicks and taking pics all while “keeping it underground like Bun B.” The Tekneke Bros. get a lot of shine too lacing songs like the simply effective “Nationality,” the dirty beats of “Got Plans,” and the freaky freak ode “Real Sex” among others. 5150 Mental can be found on the pimperish “Walk With a Limp” and the message based “N a Whitemanzeyez,” a cut where Kutt showcases some of his best work. He can flip a fast-flowing clean delivery worthy of Twista or Tech N9ne, but he’s also got some hella intelligent thought provoking lyrics. In the first verse alone you might think he’s admitting to many bad stereotypes, but as he rolls on it becomes clear in fact he’s using those very examples to challenge false perceptions:

Kutt’s voice hits a pleasant mid range vocal tone, the words are crisp, and the breath control feels well rehearsed and fully matured – which makes his musical and lyrical debut straight outta nowhere all the more surprising. Someone with this kind of talent should have been recognized a while ago, but every once in a while an artist sneaks up out of nowhere to make a name for himself. Kutt Calhoun is just such a man, a cocksure rapper who considers himself “a King for a Queen on a quest to ball” and trades in a variety of styles from braggadocio to balling to dropping gems – slightly more emphasis on the two former than the latter. Nevertheless Calhoun has represented his hometown admirably on “B.L.E.V.E.” and seems on the verge of blowing up bigtime. All he needs is more exposure, a slightly tighter selection of beats, and one big video on a Viacom owned network. That’s all it would take to make him as well known as the rest of the Calhouns in rap.