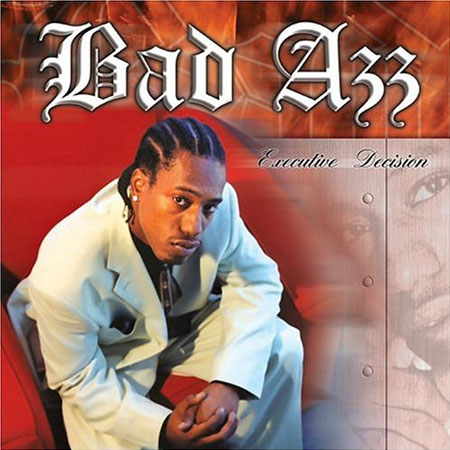 Another rapper gets fronted on by their record label. You might say “Big deal, who gives a shit?” This reviewer does. Liquid 8 Records can’t use either the “we’re too small” or “we’re too broke” excuses as reasons why they haven’t updated their website to include a listing for the 2004 release of Bad Azz’ “Executive Decision.” Fear Factory, one of the more successful rock/alternative metal groups of the last decade, released their first album for the label on April 20th. The album in this review dropped July 13th. Curiously the homepage for Liquid 8 touts the earlier FF release loudly and proudly, along with other big names on their eclectic roster like Smokey Robinson and Daryl Hall (of Hall & Oates fame). No mention of Bad Azz can be found anywhere on the site though, from the homepage to their roster of artists. So let me get this straight – you record and release two albums on Priority Records, you record a bunch of songs with Snoop Dogg (and “Wrong Idea” was a major hit for both artists), and this is the thanks you get? You think these Fear Factory loving fuckers would be happy to swoop up such a major name in the rap game. Stop fronting and put a page up for Bad Azz, before he puts a foot up YOURS.

On to the real business at hand, which includes the “Executive Decision” Bad Azz made to strike out on his own without any more of Snoop’s help. You’ll find some artists with mutual ties between both on this album – Kokane’s on “Legendary Life,” Latoiya Williams is on “Round We Go,” Daz is on “Professional Hustling” and Jelly Roll shows up for “Incredible Hullk!” No Snoop though. Why? Don’t look for any direct answers here, because even though the album has a song called “Down Wit Us” it’s not about his situation with Calvin Broadus. In fact it’s actually an all-star anti-Iraqi war ode featuring everybody from J-Ro to RBX to Evidence. Tray Deee starts it off nicely:

Proof positive that Deee has been grossly underrated for years now, but then again so has Bad Azz. The pimperish rapper is out to prove he’s got all the game he needs to achieve in the rap world, and when he hooks up with producers like Fredwreck on tracks like “Let’s Roll, Baby” the combination is magic. Azz is not only motivated to achieve his own success, but finds others who don’t get out on the grind and hustle for theirs suspect. He’s clearly rapping to them that’s not in this song, telling them why it’s long overdue to achieve:

“Let’s go baby, we can just roll lady
We can take this party on the road and just go crazy
We gon’ make a stop here, pull up and pop here
Yeah we gon’ pass through, we just gon’ be leavin if you not there
with the top back, movin through the scene like a cursor
on the computer screen, lookin mean so you cursin
You should stop that, hatin on a player’s elevation
While you sittin ’round stankin, ay they buildin space stations”

Hella fresh. Bad Azz shows a natural proclivity to go beyond the standard gamut of cliched metaphors and similies, spitting more than just punchlines to grab your attention. With his naturally distinctive voice and fly words, Bad Azz only needs the right tracks to get over, and a variety of top notch producers are working hard on “Executive Decision” to make it happen. Meech Wells provides an epic set of layered melodies to create a cinematic landscape on “Legendary Life.” Rhythm D has the formula for an ultimate riding song to vibrate your speakerbox on “Bumpin’ & Poundin.” Soopafly comes supa nice with the throwback simplicity of “Round We Go,” with a scratched hook that’s fly as hell. For those who think Bad Azz only gets down with the flossy and bossy, they might be surprised to hear Krondon and Phil Tha Agony on the two “Business and Friends” skits, which are both listenable even without them thanks to the Doubledollarsign beats.

Straight and simple, there’s just no good reason why the industry in general and the rap scene in particular continues to front on Bad Azz. As he says himself on “What it Iz Here?!” to clarify things, “I’m one of the West coast’s best that’s done done it and/it’s no question on who’s next to run it.” Fellow writer Matt Jost has already noted twice in reviews of both “Personal Business” and “Money Run” that Bad Azz is one of the most consistant and motivated rappers to emerge out of the California scene. I’ll throw my two cents in that hat too. Liquid 8 Records got a major break when they signed Bad Azz to their label, and now they ought to recognize the real and act like it.